This article originally appeared in the May 3, 2019 issue of the Progress Times

As a celebration of local artists, the National Butterfly Center is flipping the idea of a border wall in the area with an art mural headlined by renowned contemporary artist Ron English.

Last week, the Center held a “Welcome Wall” reveal party where English, and nearly a dozen artists, were invited to paint a 360-foot long mural with their artwork. 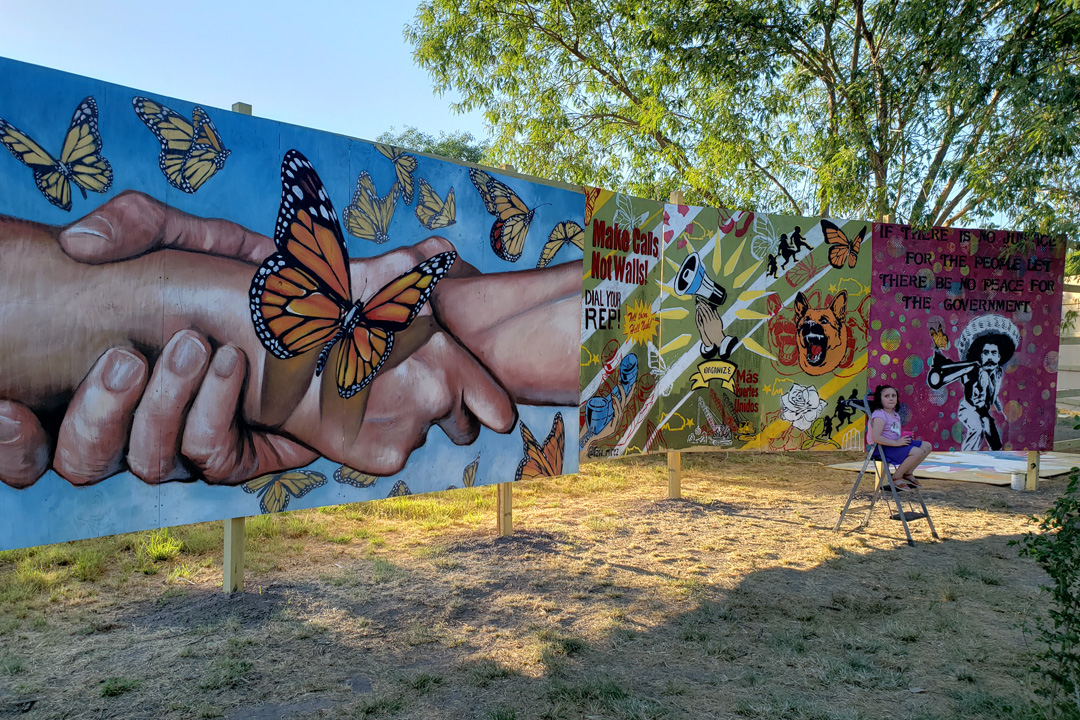 “Walls don’t work except as a place for hanging art,” the Center’s Executive Director, Marianna Treviño Wright said. “Ron’s vision is to have this up through the 2020 election.”

The “Welcome Wall” is located at the Center’s back 70-acres which until recently was in danger of being lost due to border wall construction.

The Center is a local attraction that has been garnering national attention since July 2017 after government workers were caught trespassing on property owned by the Center to clear land where the border wall is planned.

As previously reported, surveying land for the border wall began before Congress approved $1.6 billion for 100 miles of new and replacement fencing, with 33 of those miles in the Rio Grande Valley. The Senate approved another $1.6 billion for the next fiscal year.

The wall was expected to go through the Center and other local attractions but based on language made in the Fiscal Year 2019 U.S. Customs and Border Protection appropriations bill, levee wall construction will not take place at Bentsen-Rio Grande Valley State Park or the National Butterfly Center.

“I thought, with all the talk of a border wall going on, wouldn’t it be funny if we just sort of build the border wall and that it would be kind of different, it wouldn’t be the wall that President Trump has in mind,” English said of the Welcome Wall. “It would be more of a public artwork where artists and activists could join in and it would be almost like a community bulletin board where people could exchange ideas.”

This is the second art installation in the Center that protests the border wall. Last February, the Center installed “Checkpoint Carlos,” a 15 feet by 16 feet long colorful tapestry woven from recyclable material by San Antonio artist Doerte Weber.

The Welcome Wall debuted Friday, April 26 at a celebration at the Center where the public was invited to see the mural and enjoy live music and food.

“The idea came from people wanting to start a dialogue with people in support of the wall but not understanding the kind of consequences a wall would have,” English explained. “There’s numerous studies and scientists talking about how the wall will create a flood zone in the area and permanently harm the environment here. So, we invited artist to come up here and talk about their experiences and we also talked to people who are losing property to the wall. We have our own wall, but it tells a deeper story.”

Among the artists invited was Jessica Monroe from Edinburg. For the Welcome Wall, she drew an art piece in honor of the Montezuma Cyprus, a 900-year-old tree south of Abram Road that may be taken down as part of border wall construction.

“I love the idea of having a protest using art within the community,” Monroe said of her participation in the Welcome Wall. “This is a different way to talk about the situation and I hope people find joy in this.”