This article originally appeared in the Friday, May 3, 2019 issue of the Progress Times.

He thought he was going into a preliminary interview through a national nonprofit and a local construction company to receive a home. Instead, U.S. Marine Corps Corporal Miguel Simental and his family were surprised with a groundbreaking ceremony for their custom built, mortgage free house.

That was the scene last week when Simental and his family arrived to the Las Villas del Rio at the Groves and were met with a large crowd welcoming them to the site of their future home Thursday, April 25. 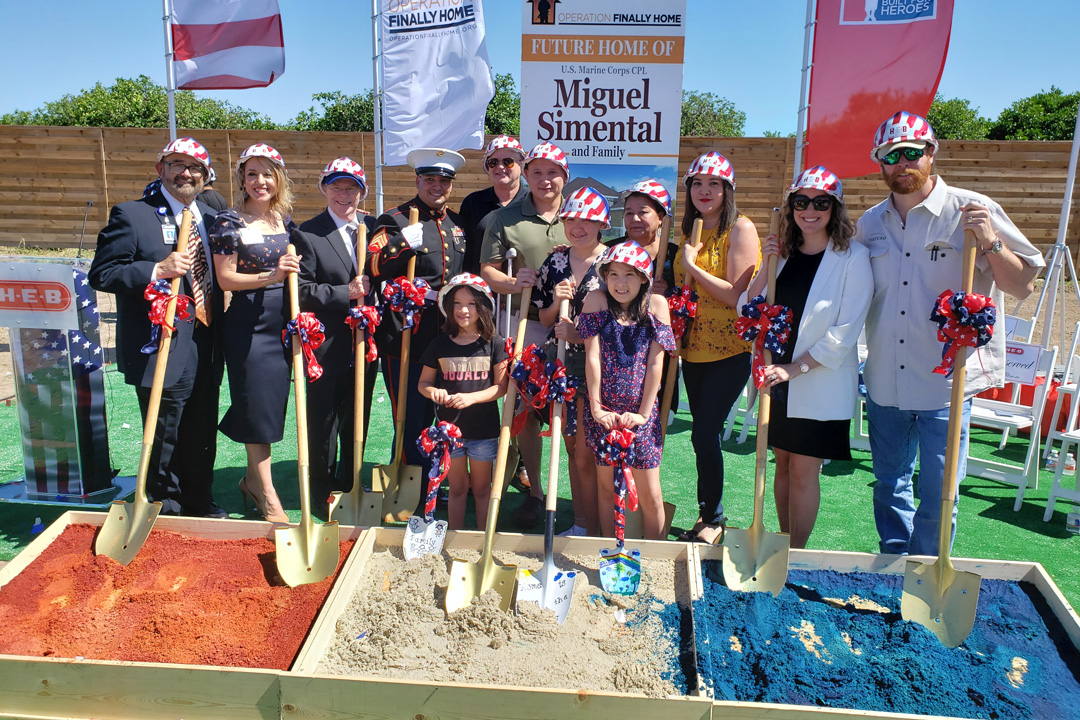 “This is an unbelievable feeling,&rdquo; Simental told the crowd. “When I first told my daughters, about the possibilities of moving back to McAllen they were absolutely thrilled at the idea and I foresee the good things that will come from this and I’m excited to share the great moments that my family and I will make in this future home. Thank you so much for giving us peace of mind.&rdquo;

The home was made possible through a partnership with HEB, the local construction company Venturo Interests and the national organization Operation Family Home, which has completed 181 similar projects across 34 states.

As part of the project, all permit fees were waived.

“It&rsquo;s the least we could do for your service,&rdquo; Joey Holland, president of Venturo Interests said. “There is a community standing here with you.&rdquo;

Holland, whose grandfather served in World War II and passed away in 2014, said he agreed to help with the project in honor of him.

“I know that he would have been proud that I helped a fellow marine, there isn’t a day that goes by that I’m not appreciative of everything that our men and women in uniform have done for us.&rdquo;

The groundbreaking ceremony was attended by veterans and local officials such as McAllen Mayor Jim Darling.

Darling, a veteran who served in Vietnam, called the event a symbol of the community&rsquo;s generosity.

“I’m always amazed at the generosity of the community that we have, they just step up day in and day out,&rdquo; Darling said. “For many of our veterans each morning we’re reminded of the service and sacrifice made for our country. And that’s certainly the case with Miguel. So what I want this [home] to be is a symbol of the community’s care, respect for Simental.&rdquo;

The home is a 2,400 square-foot one story house with four bedrooms and three and a half bathrooms to accommodate Simental and his wife, three kids and mother.

Construction on the house should be finished within 90 days, Holland said.

Simental is a Purple Heart recipient who was wounded in Iraq in 2004 from an improvised explosive device, resulting in the loss of his leg, according to Operation Finally Home Vice President Lee Kirgan.

Simental is the second Valley veteran to receive a home from his organization, Kirgan said.

“The hardest thing about finding the veterans is that the most deserving ones are the least likely ones to ask for help,&rdquo; Kirgan said. “We truly feel everyone who&rsquo;s served our country deserves the best and more, we have to put forward the best of the best in this application process.&rdquo;

Kirgan noted the generosity of the community as Operation Finally Home is constructing houses with a market value of $325,000 through donations from cities and local businesses.

Simental said after the groundbreaking that the new home will be a relief for his family. Currently he and his family live in a two-story house in Cedar Park, about five hours north of McAllen.

“It&rsquo;s a blessing to come back and be closer to family,&rdquo; Simental said. “We usually travel so much to visit them and since all the bedrooms are upstairs it&rsquo;s a struggle to get there. We lived there because it was available but have discussed coming back to the Valley and it&rsquo;s happening because of this home. Who gets something like this? It&rsquo;s unbelievable&rdquo;