This article originally appeared in the May 3, 2019 issue of the Progress Times.

Gathering from across the RGV and state, Catholic War Veterans met in Mission to discuss future plans and evaluate more opportunities to serve their communities.

Last week, the CWV held their 74th annual State Convention at Post 1065 in Mission. They held their opening ceremony last Friday, April 26 before going into meetings that would last through Saturday. 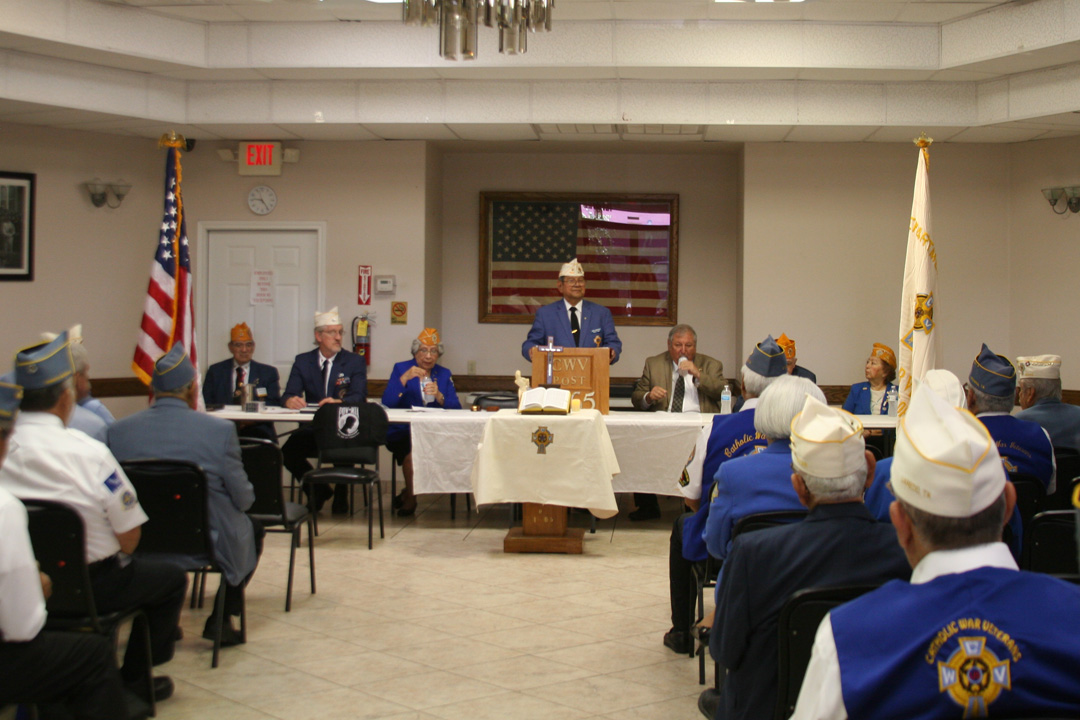 During this year’s conference, Mission resident David Silva was named the new State of Texas Department Commander for the Catholic War Veterans. This will be his second time elected to this position, formerly serving the organization in this capacity from 2015 to 2017.

Silva is a firm believer in veterans organizations, and encourages fellow former service members to join.

“Supporting your community and veterans is a continuation of the brotherhood of veterans,” Silva said.

Former Department Commander Julian Mendoza said that during the convention, they would be meeting new friends and reminiscing about past experiences.

“I hope that this is the way this convention will be remembered,” Mendoza said.

Mendoza went into detail about what the annual conventions are meant for.

“We discuss new business and unfinished business, reports of strength and how we’re doing as veterans in the entire state of Texas,” Mendoza said.

Next month, Mendoza will have been part of the Catholic War Veterans organization for 50 years. He joined once he returned to the United States after serving during the Vietnam War.

The Catholic War Veterans are involved in their communities throughout the country, according to Mendoza.

“Of course we take care of our veterans, and we participate in patriotic activities year-round,” Mendoza said. “We provide funeral services for our veterans, or any other veterans in our community that need assistance.”

The Catholic War Veterans are involved throughout the area, specifically at the funerals of unaccompanied veterans who have passed where they speak and pray. They also volunteer at VA clinics and hospitals, attend city events on Veterans Day and Memorial Day and participate in activities at parishes in every city they have a presence.

State Auxiliary President Lupita Martinez said the CWV has accomplished many things over the last year.

“All the work that we have done, our CWV members, our Auxiliary members, this is where you get your recognition for all you have done throughout the year,” Martinez said. “You will be recognized and awarded later at our meetings and our banquet.”

Mayor Armando O’caña was able to attend the opening ceremony, and said he was proud it was being hosted in the city of Mission.

O’caña said that his father, who was honored for his work with the CWV nationally, always told him to call a veteran friend from the organization if he was in Baltimore, Maryland. When he found himself there years later, he made the call.

CWV Post 1065 Commander Felix Ramirez was happy to host the convention, saying a lot of work went into it.

“I learned a lot and I’m still learning,” Ramirez said. “I know we’ll finish off with a good convention here. May we not forget all our military people that are spreading freedom and democracy throughout the world right now.”

That evening, CWV Post 1065 celebrated their successes over the last year with a banquet that distributed awards to members who have worked diligently. The convention ended at a mass last Saturday at Our Lady of Guadalupe Church.

In August those present for the Mission gathering will reconvene, this time for the National Convention in San Antonio.