Five members of the Sharyland Lady Rattlers golf team are preparing to go up against the best of the best in the state of Texas at the UIL State Golf Tournament in Georgetown Monday and Tuesday of next week. The team, which is made up of one freshman, one junior and three seniors, will be looking to live up to the success of previous Lady Rattlers’ golf teams one of which, the 2018 team, placed second at the state tournament.

Coached by Ashley Garza, the Lady Rattlers earned the right to compete at the state tournament by placing second at the Region IV tournament. They actually tied for first at regional but lost the tiebreaker to Alamo Heights Blue to place second. While the Lady Rattlers would’ve rather won that tournament, it really did not affect their qualifying for state since the top three teams at each regional tournament all advance. 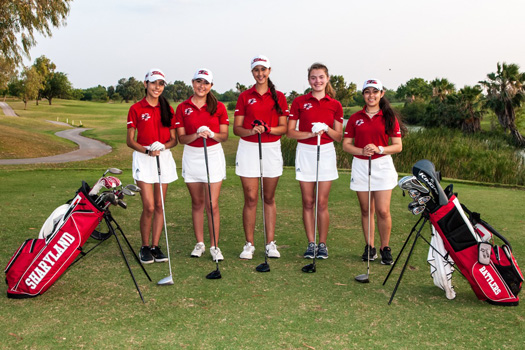 Recently, I had a chance to sit down with these five young ladies to ask them questions about themselves, their team and the upcoming state tournament. Here are some of those questions and some of their responses.

How old were you when you took up golf and what made you want to play golf in the first place?

“I started playing golf when I was 5 years old,” Flores said. “I took it up because my Dad played golf but I didn’t like it that much at first. But then my freshman year I really got into the sport because I saw that my sisters were getting offers from colleges and I wanted to pursue that too. So I started to train and practice every day.”

“I’m originally from Monterey, Mexico,” said Salinas. “When my family would come to the Valley to go shopping at the mall we would see McAllen Country Club and I always wondered what they would do there. My Dad told me that they played golf there, so even though I really didn’t know what golf was, I told him that I really wanted to start playing. I just loved the beautiful green grass. So if I needed to play golf to be on that grass, then that’s what I wanted to do. And I did start playing when I was 10 years old.”

My story is similar to Paulina’s,” Eraña said. “My oldest sister is really talented at golf. All my life growing up she has always been out on the golf course and I kind of got forced into it. But over the years I really started to enjoy it and I really enjoy it now.”

“I’ve been playing since I was 8 years old,” Cantu said. “I took it up because I had played other sports before but golf really found a place in me. It’s a really competitive sport and it’s not a sport that you can pick up so easily, so the challenge kind of it forced me to keep bettering my game.”

“I first picked up a golf club when I was 10 years old,” Osuna said. “I got interested in the sport because my dad would take me to Academy every Saturday and I would try out the clubs even though I had no idea what I was doing. But then he signed me up for golf classes and that’s how I got started.”

Golf is normally an individual sport but you all are part of a team. What do you like about being a member of the Lady Rattlers’ golf team”

“What I really like about being on this team is that even though I may be having a bad day on the course, I know that my teammates are there to support me and to encourage me to go out and practice and to work harder,” Eraña said. “And I can do the same for them.”

“A team is a bond,” Cantu said. “We have a bond with each person on the team. Our bond will only grow stronger with each tournament we play together and every practice we have together.”

Are there any routines that you do before each tournament or any superstitions that you have about playing golf?

“It’s always a mandatory thing to pray right before a tournament,” Cantu said. “You put your faith in God and if it’s your day it’s your day. Also, I believe in bad juju balls; if you have a high score on a hole, get rid of that ball because it was the golf ball’s fault.”

“Before I hit my first shot in a tournament, I always try to do three swings super-fast and super-hard,” Flores said. “That helps me to get my nerves out. Then I do a slow swing and then I hit it.”

“I carry my head cover to all tournaments,” Eraña said. “His name is Charles, he is a raccoon and I’ve had him since I was in seventh grade. He has to be on top of my bag whenever I am hitting with my driver. If not, it does not go well.”

What are you looking forward to the most and what are you the most nervous about when it comes to the state tournament?

What would it mean to you to win a state championship?

“I think it would be really awesome to win state because our time, our work and our effort during the entire year would pay off,” Eraña said. “I think that just seeing the faces of our coach and our parents if we were to win state would be an awesome experience.”

“I think it would be really exciting for our outgoing seniors to have won a state title on their last year,” Salinas said. “I’m currently a freshman and it would be really awesome to say that we won state my freshman year. If it were to happen, I think we’ll all be so excited that we’ll be about to throw up.”

“It would mean that all we worked for finally paid off,” Osuna said. “All the years of practicing, all the bad rounds and all the good rounds would pay off; not only for us, but also for our coach and our parents.”

The only other Big 7 golfer who qualified for the girls’ state tournament in Georgetown next week is Briana Silerio of La Joya Palmview High School. Silerio shot rounds of 81 and 78 for a total of 159 at the Region IV tournament to tie for sixth place. The fact that she had the second lowest score for an individual golfer whose team did not qualify for state is what allowed her to become a state qualifier.