The Sharyland Pioneer Diamondbacks picked up their second straight bi-district title with a 10-0 five inning victory over Brownsville Lopez. The win improved the Diamondbacks record to 29-5 in what has been a record breaking season for victories for the five year program. 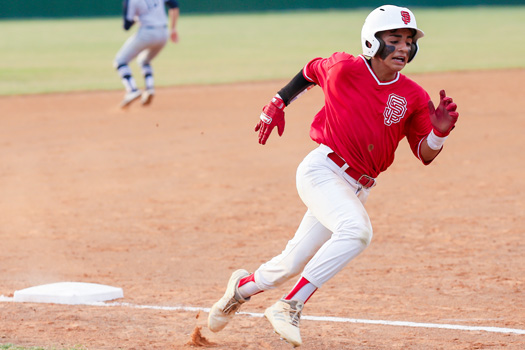 Pioneer sent 10 batters to the plate in the first inning; scoring five runs on seven hits. Pitcher Jacob Rosales helped himself with a RBI double and scored a run on a single from right fielder Johnny Lugo. Second baseman Juan Rivera contributed a two-out, 2-RBI single in the third and Rosales ended the game with another RBI double in the fifth. In addition, Rosales went the distance on the mound limiting Lopez to two hits and only three base runners while striking out six. The play around him was solid too. The Diamondbacks pulled off a nifty run-down to pick off a Lopez runner between bases in the fifth and catcher Angel Nunez assisted on three of Rosales’ strikeouts; pouncing on balls in the dirt before throwing to first to record the outs.

Next up for Pioneer is a re-match with District 30-5A champion Corpus Christi Veterans. Veterans eliminated the Diamondbacks in the area round last year in a best-of-three series 2-1. The two teams will meet in Alice for this year’s series beginning with Game 1 tonight at 7 pm. Game 2 is scheduled for tomorrow at 2 pm and Game 3, if necessary, will start 30 minutes after the completion of Game 2.

The Diamondbacks current run has coincided with the arrival of coach Casey Smith, who took over the Pioneer program after a highly successful run at Mission Veterans Memorial High School. Smith led the Patriots to seven post season appearances in his eight seasons at the helm. The change in schools has not changed his goals. “They are the same every year,” said Smith, “Get to Round Rock (the site of the state tournament) and get a ring.” Smith credits his success to having good kids who take ownership in the program and are willing to work hard.

Several members of the Diamondbacks spoke highly of their coach. Rosales, a senior, said “He (Smith) gets everyone to be energetic and play with that energy.”

Nunez, a junior, said, “Coach (Smith) expects your best and gives you his best.”

Rivera, a freshman, added, “He (Smith) is a good coach who cares about us.”

As far as getting ready for this weekend’s series Smith expects his team to be right there with a Corpus Christi team that advanced to the state semi-finals last year and returns a good portion of their squad. “We feel ready,” said Smith. “We are more mature than last year and have grown collectively.” Smith says the key to advancing is getting the team to play to the best of their ability and just do what good teams are supposed to do.

Several Diamondback players expressed similar sentiments to that of their coach. Rosales felt that the team just needs to play like they know how to while Nunez emphasized keeping the team humble and taking it (the series) one pitch at a time.

In other games involving the Big 7, District 31-5A champion Sharyland High continued their recent winning streak by defeating Edcouch-Elsa 17-0 in a one game winner-take-all bi-district round matchup last week. The Rattlers open their best-of-three area round series at home tonight against District 30-5A runner-up Corpus Christi King. Game time is scheduled for 7:30 pm. The series moves to Cabaniss Field in Corpus Christi tomorrow. Game 2 is scheduled to start at 2 pm and Game 3, if necessary, will start 30 minutes after the completion of Game 2.

La Joya Palmview rounds out the three Big 7 schools still playing. Their fourth place finish in District 31-5A meant a match-up with District 32-5A champion Brownsville Veterans last week. The Lobos secured a spot in this week’s area round by defeating Veterans 2-0. Their next opponent is District 29-5A co-champion Calallen. The two will meet in Laredo tonight at the Student Activity Complex in a one game winner-take-all contest. The game is scheduled for 7:30 pm.

One team who just fell short of advancing was the La Joya Coyotes of District 30-6A. The Coyotes dropped the opening game in their best-of-three bi-district series last Friday with District 29-6A champion Laredo United South 3-1. They fought off elimination with a 3-2 victory in Game 2 before losing 11-5 in the decisive third game. La Joya closed out the season with an 18-13 record.