Three Big 7 baseball teams along with another District 31-5A squad have advanced to the Region IV quarterfinals of the UIL playoffs following impressive victories over highly ranked opponents from the Coastal Bend last weekend. The victories set up matchups between teams who know each other well. District 31-5A champion Sharyland High takes on La Joya Palmview while Sharyland Pioneer meets Rio Grande City in third round series scheduled to begin last night.

Sharyland High vs. La Joya Palmview
Sharyland continued its impressive run of victories with a 2-0 sweep of Corpus Christi King this past weekend in a best-of-three series. The Rattlers defeated King 6-3 last Friday and eliminated them with a 2-0 win Saturday. 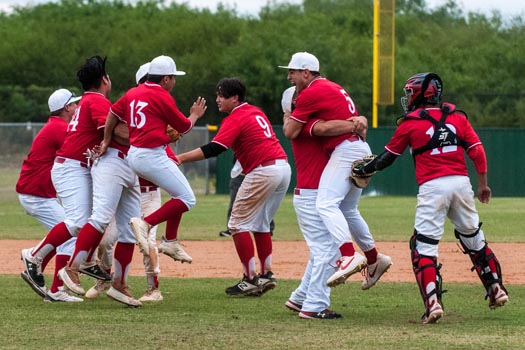 Sharyland has won all three of their play-off games and 12 straight overall dating back to March. The Rattlers have shown they can score by virtue of their 17-0 defeat of Edcouch-Elsa in the bi-district round. They can pitch and play defense too; two of their three post season wins have been shut outs.

Last week’s defeat of King puts the Rattlers into the third round for the first time since 2013. This year’s team does have postseason experience, however. Many of the players were part of last year’s team that advanced to the second round and their coach, Bart Bickerton, is certainly no stranger to the playoffs. Bickerton has now been to the postseason 19 times in his 21-year career.

His Sharyland teams have been to the regional semifinals three times and made a regional finals appearance in 2004. The 2-0 victory over King was the 500th of Bickerton’s career and improved the Rattlers to 30-4 overall on the season.

Waiting for the Rattlers is a La Joya Palmview team whose players have little playoff experience prior to this year but do have a history of post season success under coach Manuel “Ricky” Garcia Jr. who has been at the helm of the Lobos since they first opened. Garcia Jr. has guided the Lobos to eight previous playoff appearances, including three consecutive trips to the regional quarterfinals from 2014 to 2016.

This year’s team has been on quite a roll of late. A 14-2 loss to Rio Grande City on April 16 put the Lobos postseason hopes on the ropes but they finished the regular season with three straight wins and have reached the third round of the playoffs by defeating two district champions; both in one game winner-take-all games. The Lobos took down Brownsville Veterans 2-0 in bi-district and knocked off Calallen 3-2 in eight innings in the area round last week to set up the meeting with Sharyland High. The Lobos are currently 23-10 overall.

As members of District 31-5A, the two teams have already met this year, splitting their two previous games. In March, the Lobos won the first meeting on the road 6-4 and the Rattlers won the rematch 8-1 at Palmview High.

Sharyland Pioneer vs. Rio Grande City
District 31-5A runner-up Sharyland Pioneer is the third Big 7 team still alive after two thrilling come-from-behind victories in the area round last week against one of the top teams in the state. After Corpus Christi Veterans won the opener 11-1 Friday, the Diamondbacks took the series 2-1 with two straight wins at Pioneer High School Saturday. Game 2 went extra innings when the Diamondbacks, trailing 1-0 and down to their last out, tied the game in the bottom of the seventh and won it 2-1 with a run in the bottom of the eighth. They fell behind 2-0 early in the decisive third game before a five run outburst in the fourth inning put them in control of an eventual 7-2 win. Pioneer opened the postseason with a 10-0 victory over Brownsville Lopez in a one game winner-take-all game in the bi-district round.

Pioneer has a core of players with playoff experience from last year and a coach with tons of it. Casey Smith has been here before as head coach at Mission Veterans from 2010 to 2017. His 2015 Patriot squad reached the regional semi-finals. The Diamondbacks have reached the post season in both of Smith’s seasons at the helm losing in the area round to Corpus Christi Veterans 2-1 in a best-of-three series last year. Timely hitting, strong defense and stellar pitching have fueled their current playoff run. Their three postseason victories have been by a combined score of 19-3. The Diamondbacks currently sport a 31-6 overall record.

Waiting for Pioneer is District 31-5A rival Rio Grande City. The teams split their two district games a few weeks ago in the last week of the regular season. Rio won the first meeting 7-5 in Rio Grande City but Pioneer won the season finale on their home turf 6-5. Incidentally, the two coaches (Smith and Rio coach Rock Cortinas) met in the 2015 regional quarterfinals when Smith was at Mission Veterans and Cortinas was at Roma. Veterans won that best-of-three series 2-1.

The Rattlers are 24-10-1 overall so far this season. Their current play-off run includes a 2-0 sweep of Valley View in a best-of-three bi-district series and a 2-1 series win over Gregory-Portland in a best-of-three area round series last week. In that series, the Rattlers advanced with home victories in Game 2 (6-3) and Game 3 (5-3) after losing Game 1 (2-0).

The two teams will meet this time in a best-of-three series scheduled to begin last night at Pioneer High. Game 2 is scheduled for 7 pm tonight in Rio Grande City. If necessary, Game 3 will be tomorrow at 3 pm at Mission High School.