His name is Jummin Lee but he goes by “Jimmy” and he is one of the top junior golfers in the nation. Is he however the best boys 5A golfer in the state of Texas? He very well could be, and he’s about to get the opportunity to prove that he is Monday and Tuesday as he competes in the UIL Golf State Tournament in Georgetown.

As a four time district champion, a two time regional champion and a four time state qualifier, with a third place finish last year, Lee certainly has earned the right to be named the All-Valley boys golfer of the year the past three years as he has. However, the one accomplishment that has eluded him is a state championship And that is what he is determined to bring back from Georgetown with him next week. 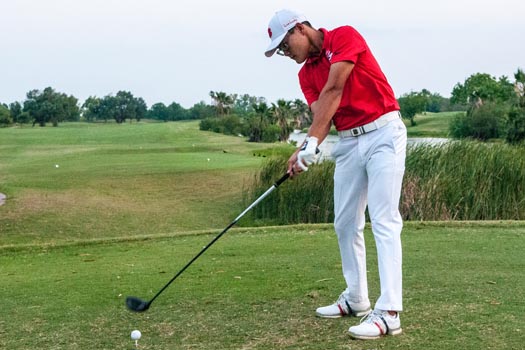 Now in his senior year at Sharyland High School, Lee was only a sophomore when he committed to continue his golfing career at what was the second ranked golf school at the time, Texas A & M University. He is now ranked 27th in the nation in junior golf and is ranked 604th in the world as an amateur golfer.

Not many high school athletes earn the right to compete at the state level all four years of their high school careers, but with three state tournaments already under his belt, that is exactly what Lee will be accomplishing next week. As for how he has done at state the first three times, he’s done well but not well enough for his liking.

With the state tournament consisting of only two rounds of play, it’s almost impossible to make up for a bad first round on day two.

“While anything is possible at any point, if you start off bad you either have to really finish strong or you just can’t have a bad first day,” Lee said. “So when you get to state, you have to be ready both mentally and physically. It’s simply a matter of knowing that you have to perform when it really counts.”

So what was it that made Lee decide to take up golf in the first place? It goes back to his childhood in South Korea.

“It’s hard to say when I first took up golf because my dad had an indoor golf range in South Korea,” Lee said. “So I would go out there to help him pick up balls when I was three or four years old. I was actually a speed skater and a swimmer before I became a golfer. And while I was still speed skating and swimming at six years old when we moved to America, it was the day my dad and I decided to check out some golf courses that piqued my interest in playing golf.”

“That was what led me to start attending summer golf camp at Palmview Golf Course,” added Lee. “And that was where I met this amazing coach, Carlos Espinoza, who is still my golf coach* to this day. And here I am, my fourth year at state.”

While some people may be satisfied to sit back and enjoy the kind of success Lee has already had, he has his sights set on becoming much more than the top high school golfer in the state of Texas.

“Winning the state championship is one of my short-term goals,” Lee said. “I have a lot of long-term goals too. I like to have a good mindset on the career path that I’m taking. I know that I want to get my degree from A & M for sure, and I know that I want to leave a really good legacy in the Valley. So therefore I do want to bring a state championship home. But my ultimate goal is to become the number one player in the world at the end of the day.”

With such a lofty goal in mind, Lee has a favorite professional golfer he believes is a good role model to help him achieve it.

“The person I look up to the most is Rory McIlroy,” Lee said. “Just because the fundamentals of his golf swing, the way he lives and everything he does really impresses me and that’s the way I see myself in the future. He’s really solid on his game plans, he’s really repetitive, he knows what he’s doing but at the same time he’s having fun with his life. He knows how to handle himself on the golf course and off, and he knows how to have fun but yet still grind on the game of golf.”

The 5A boys’ golf state tournament will be taking place Monday and Tuesday, May 20 and 21, at the White Wing Golf Club in Georgetown, Texas.