The third time was the charm for 24-year-old Yesenia Yvette Guerrero.

Guerrero, originally from La Joya, was recently crowned Miss Texas. She is now preparing to head to La Vegas, Nevada in August to compete for Miss United States. 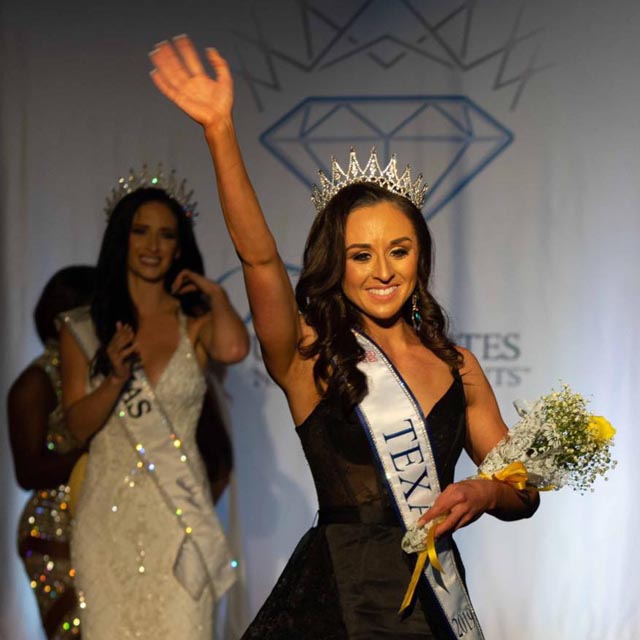 Since she was one month old, Guerrero has been participating in pageants. She said her mother, a former pageant queen herself, originally got her daughter involved in an endeavor that is now taking her to the national level.

“It definitely helped me become a little more extroverted,” Guerrero said. “I was timid as a child, but being on stage and making friendships through pageantry, it really opened up opportunities for public speaking, allowed me to network myself and make connections across the Valley.”

It was Guerrero’s third time vying for the title of Miss Texas. In previous years she competed as Miss Rio Grande Valley, Miss Hidalgo County and won as Miss South Texas.

“I wanted to show young women that if at first you don’t succeed, that’s okay, you can try again,” Guerrero said. “I never took the experience as failure because I walked away from each pageant learning something about myself.”

Guerrero credits several people for helping her get to this position, and said it takes a village to prepare.

For several weeks (about three months) before a pageant, her boyfriend does her meal preparation, her seamstress works with her on the fit and flow of her gown, her hair and makeup stylist works with photography, and her directors make them all feel important.

“My mom was there from the very beginning,” Guerrero said. “There’s so many people to list that it takes a village.”

Endless support from the Rio Grande Valley was one of the things that has kept her going in the midst of pageant jitters and adrenaline.

Guerrero described being backstage during the Miss Texas United States pageant, which was streamed on Facebook live, and getting on her phone to see the feedback from the public.

“I could see comments from people – ‘Represent the Valley,’ ‘Go RGV,’ ‘Make the Valley proud,’” Guerrero said. “That really enabled me to keep going and keep pushing, because I felt like I had a family to represent, I had all this area to represent and make proud.”

When she was 11 years old, Guerrero temporarily took a break from the pageant circuit until she was 16, citing “awkward years” that made her take a step back. She returned in the Miss La Joya Teen pageant, and said it escalated from there.

“I wanted to feel confident and comfortable in my own skin, I wanted to push some boundaries,” Guerrero said. “I wanted to see what new doors I could open for myself.”

A trainer at TruFit, one of Guerrero’s top priorities is educating the public, particularly the youth, on the importance of taking care of your body and staying healthy.

“I want to promote my program, which is called Pump It Up – it’s about combating heart disease,” Guerrero said. “The Valley, with all the wonderful things we have, was labelled as the fourth fattest region in the nation, with obesity and heart disease being very high.”

“Being that I’m a certified personal trainer and group fitness instructor, I have the education, knowledge and skills necessary to make a dent in that statistic,” Guerrero added. “And now that I have this platform to do so, I really want to use that.”

The charity and volunteer work that comes with winning a pageant crown has shown Guerrero how giving back to the community, regardless if mandated or not, is vital to keeping communities strong. She hopes to highlight the organization more through outreach so more girls can see that their chance is out there.

“Other girls across the state of Texas need to know that the opportunity is waiting for them, and they don’t feel it’s for a certain type of girl,” Guerrero said. “It’s for everybody. There’s so much the organization can offer them, especially if you plan on being your own boss one day.”

Guerrero hopes to open her own gym one day, and she feels this organization acts as a mentorship program. At the Miss Texas pageant, she recalled being backstage with first runner up Lyndsay Sturgeon and praying before they announced who won.

“We said ‘whatever comes, let us just be willing to submit to God’s will,’” Guerrero said. “‘Whatever happens, this is God’s will and this is what he is calling you to do.’ So it was very nerve-wracking, and when they called my name it was unreal. Making it that far, I’m still stumbling over words.”

At the state pageant, women from the Valley took four crowns, Miss Texas, Little Miss, Pre-Teen and Junior Teen all hail from the area.

“I feel that now the Valley really made a landslide at the state pageant, people are going to start looking at us in a positive light,” Guerrero said. “We have such great representation, there are so many young role models here that now have these opportunities to really showcase all the good that the Valley has to offer.”

Competing in pageants had difficult moments as well.
Guerrero noted that when she first started, she found herself constantly comparing herself to others.

“I kept trying to make myself fit the mold of the crown, I tried to make myself fit whatever I thought the judges might have wanted,” Guerrero said. “At the end of the day, you can’t be anyone else. The more I started loving myself and respecting my character and who I was, I found I shined a little brighter.”

The message she really wants to communicate to young girls is just that: be yourself and own that.