For the first time in school history, the Pioneer Diamondbacks’ baseball team is in the state’s Sweet 16. Officially known as the UIL Region IV Semifinals, the fourth round of the state playoffs is affectionately referred to as the Sweet 16 due to the fact that there are only 16 5A teams from across the state of Texas alive in the playoffs. That is down from the 128 teams that originally qualified for the playoffs. 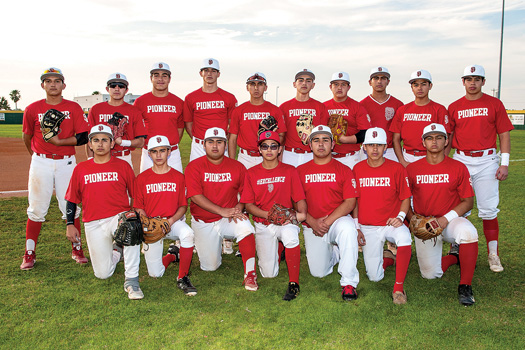 So what is it about the 2019 Diamondbacks that has allowed them to not only win Bi-district, Area and Regional Quarterfinals championships already this postseason, but has also seen them win all five elimination games they have played en-route to becoming a Sweet 16 team? Smith believes he has the answer.

“I think that we’re pretty resilient,” Smith said. “We’re also a lot tougher than people give us credit for.”

How tough and resilient are the Diamondbacks? Tough and resilient enough to bounce back from an 11-1 loss in game No. 1 of their area round best-of-three series against the then No. 2 ranked Corpus Christi Veterans Memorial team, and then take games No. 2 and No. 3 to win the series. And this was after being just one out away of being eliminated in game No. 2.

“I told the boys how proud I was of them after we won that series,” Smith said. “I was proud of the way they continued to fight, because staying in the fight is part of life and part of baseball. And I saw that come to fruition not only in that series, but also in our more recent series against Rio Grande City.”

Pioneer freshman third baseman Oscar Serna shared his thought on the secret to the Diamondbacks’ success this season when he said, “Our pitching is outstanding. They pound the strike zone all night and that’s what gets us the wins.”

In what had to of been an unprecedented series of events, the four District 31-5A teams that qualified for the playoffs were all still alive going into the regional quarterfinal round. That is why the Diamondbacks played Rio Grande and the Sharyland Rattlers played the Palmview Lobos, all district opponents, in that round.

When asked what having the four 31-5A playoff teams still be alive going into the third round said about the level of competition within the district, Smith said, “It was an extremely competitive district that could’ve easily gone either way on a lot of different nights. I think that sharpened us all up a little bit and as a result of that, we had those four teams left standing.”

As impressive as all those numbers are, Smith says that he and his team are not at all intimidated.

“We’re looking forward to the challenge,” Smith said. “You put a number next to somebody and you put a target on them. We’ve got our eyes on that target but we know that they’re a good team and we respect what they do. But we’ve got a lot of confidence in ourselves as well. We feel like we’ve got a good team as well, and we’re going to Laredo with a mindset of competing and winning that series.”

When asked what he thought it was going to take for the Diamondbacks to emerge victorious against a hot team like Boerne Champion, Pioneer senior shortstop and pitcher Jacob Rosales said, “It’s going to take us continuing to play the way we have been playing the past few games. And that is coming out with a lot of energy, seeing the ball, hitting the ball and not making that many errors on defense.

When asked if it would be nice to see his Diamondbacks do something against Boerne Champion that they have yet to do thus far in the playoffs, and that is to win the first game of a best-of-three series, Smith laughed and said, “I’d say yes, but I’d rather win game three.”