The Sharyland Rattlers continued their run through the UIL baseball playoffs last week in a hard fought, tension filled matchup with fellow Big 7 and District 31-5A rival La Joya Palmview. The Rattlers prevailed over the Lobos 2-1 in a best-of-three regional quarterfinal series to advance to this week’s Region IV semifinals.

Next up for Sharyland is Kerrville Tivy from District 26-5A. The Antlers are currently 29-11 on the season having defeated Austin Johnson, San Antonio Alamo Heights and Dripping Springs so far in the postseason. Tivy reached the regional finals last year and the regional semifinals in 2017. The series is scheduled as a best-of-three slated to begin tonight at 7:30 pm at Riverside Park in Victoria. Game 2 will be Saturday at Cabaniss Field in Corpus Christi at 3pm. If necessary, Game 3 will also be at Cabaniss; 30 minutes after the completion of Game 2. 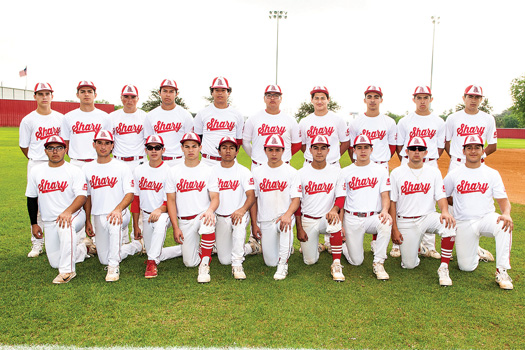 Sharyland will be making their first appearance in the regional semis since 2012. So far this postseason the Rattlers have recorded victories over Edcouch-Elsa and Corpus Christi King before subduing the Lobos. The Rattlers are currently 32-5.

Both Sharyland and Palmview entered the series with momentum. The Rattlers had won their previous 12 games while the Lobos had opened the playoffs by defeating two district champions (Brownsville Veterans, Calallen) in the first two rounds. Led by the pitching of Johnathan Martinez and Paulo Landeros, the Lobos shut down the Rattlers 1-0 in a nine inning Game 1 victory last Thursday.

The Rattlers battled back with a hard fought 5-3 win in Game 2 on Friday at Palmview High School. Designated hitter Diego Pena’s second inning single brought in two runs and Sharyland added two more in the fourth on a sacrifice fly from shortstop Andy Lozano and a double from centerfielder Pepe Contreras. Palmview responded with two runs in the bottom of the fourth and another in the bottom of the fifth with run producing hits from Manuel Flores, Landeros and Martinez. They kept the score close with some stellar defense that included throwing out Rattlers runners attempting to score in both the fourth and fifth innings. First baseman Martin Vasquez’s solo homerun in the seventh gave the Rattlers some breathing room before Chase Gerlach shut down a final Lobos rally in relief of starting pitcher Ivan Alvarez.

Gerlach was called upon again for the series finale Saturday. The junior responded with a complete game performance, limiting the Lobos to one run on four hits while striking out three in the 2-1 victory. A big double play in the fourth inning and slick fielding from Lozano and third baseman Juan Lopez helped snuff out a number of potential Palmview threats.

Gerlach was quick to credit his teammates. “Our defense is tremendous. They just know how to step up to what’s going on and make plays when it counts.” For his role in helping get the Rattlers through two elimination games Gerlach added, “Going into those situations, I know my team needs me and I just try to put my thoughts behind me and go out there and throw. Try to put it (the ball) in the zone and have my defense make plays.”

Coach Bart Bickerton was equally supportive of his team’s defense. “It’s unreal. We expect the ball to be hit, so defensively we’ve been there all year. We’ve had a bunch of shutouts and things like that and it’s the defense that’s done it.”

Bickerton gave credit to his pitcher too. “The thing with him (Gerlach) is I know he is not going to get nervous. He wanted the ball last night and (today) he did a phenomenal job for a guy who has only pitched 15 innings this year. He’s only had one start (this year) other than today. It was incredible.”

Still, the Rattlers had to score to win and with Palmview pitcher Paulo Landeros matching Gerlach’s effort for most of the game, that was not an easy task. Sharyland took a 1-0 lead in the first with a two-out single from catcher Abraham Alvarez that scored Pepe Contreras. The lead held up until the top of the sixth when Lobos third baseman Eduardo Rios beat out an infield hit that got Albino Villarreal home to tie the game.

The Rattlers took the lead for good in the bottom of the sixth after Martin Vasquez’s single to left center was misplayed, allowing him to reach third with no outs. Two outs later, Gerlach hit a chopper that was also misplayed, bringing in the deciding run. Gerlach worked a perfect seventh to seal the deal, getting a spectacular diving stop and throw from Lozano at short for an out and recording a strikeout to end it.

Palmview closed out their season with a record of 24-12 and have good reason to look forward to next year with five starters and three other players returning.