The fourth time at the UIL Golf State Tournament was the charm for Sharyland Rattlers’ golfer Jummin “Jimmy” Lee who claimed the first ever golf state championship in Sharyland High School history Tuesday.

Lee shot a three under 69 in the first round to finish the day in a two-way tie for first place with Turner Hosch of Highland Park Blue. 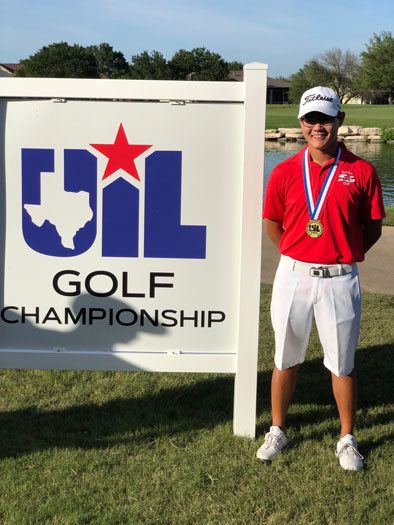 In the second round, Lee shot a four under 68 to pull away from Hosch, and the rest of the field, and finish four strokes ahead of his nearest opponent, Kevin Watts of Colleyville Heritage, with a two day, seven under, total of 137. Lee’s previous finishes at the state tournament were 10th place his freshman year, fifth place his sophomore year and third place last year, when he was a junior.

Lee, a South Korea native, is a four time district champion, a two time regional champion, a four time state qualifier, a three-time winner of the All-Valley boys golfer of the year award and now he is a state champion.
Congratulations to Jimmy, Rattlers’ head golf coach Ashley Garza and the entire Sharyland High golf program for a job well done!