Several local veterans organizations will be holding Memorial Day services this Monday, May 27.

The Catholic War Veterans Post 1065, American Legion Post 93 and the RGV State Veterans Cemetery will be participating in public services for those who wish to memorialize and celebrate veterans who have passed away. 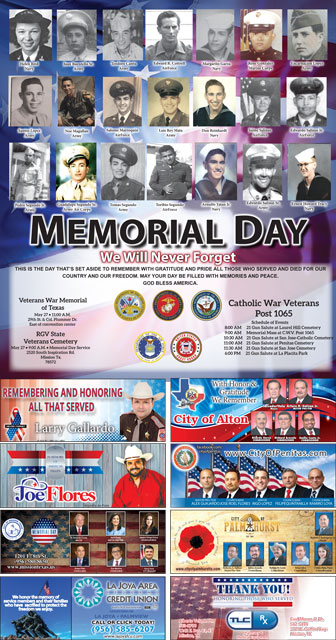 David Silva, the State of Texas Department Commander for the Catholic War Veterans, said these events are vital for keeping the memories of veterans alive.

“This day is for commemorating all the men and women who have died during or after their military service,&rdquo; Silva said. “A lot of people visit cemeteries or memorials to commemorate those who have died.&rdquo;

Silva said that while there are often other things going on Memorial Day weekend, like store sales and barbeques and parties, we should never forget the real reason for the day: veterans.

“I see no problem with any of it, as long as you remember our military men and women that gave us the freedom that we have right now,&rdquo; Silva said. “Keep them in your prayers and teach it to the younger generation coming up.&rdquo;

Silva noted that as time passes, Memorial Day traditions are becoming less common. He was glad that several veteran organizations in the RGV have held services consistently.

“The younger generation doesn&rsquo;t teach our kids about stuff [traditions] like this, and it starts off with the parents,&rdquo; Silva said. “A lot of parents don&rsquo;t realize or don&rsquo;t know what Memorial Day is exactly, and they start celebrating for whatever reason. It&rsquo;s actually about keeping our prayers with our members who have fought for our freedom here.&rdquo;

American Legion Post 93 Commander Rudy Flores noted that these services are necessary for veterans in the Rio Grande Valley.

The schedule of events on Memorial Day includes: