This article originally appeared in the Friday May 24, 2019 issue of the Progress Times.

More than a year after it was destroyed during a police chase, a statue sporting the Dallas Cowboys’ signature blue and white is back on Tom Landry Boulevard.

The statue, located on the intersection of Tom Landry Boulevard and Miller-Avenue-up the street from the city’s historical mural depicting the career of Mission native and original head coach of the Dallas Cowboys Tom Landry, was reinstalled Tuesday. 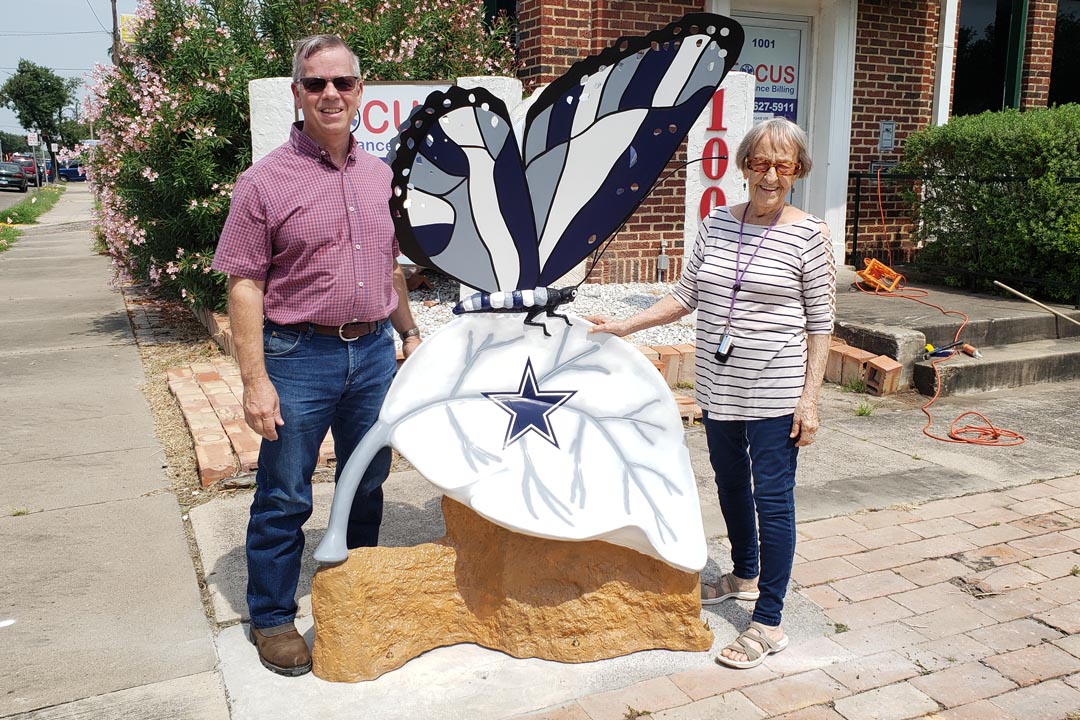 “When the first one was destroyed, people kept coming to me to ask me when it would be put back,” Maxilou Link, president of the Upper Valley Arts League-the organization that creates the butterfly statues-said.

“Now we can tell people the butterfly is back.”
The statue is located right outside a building owned by local chiropractor Kevin Sparks. He said the statue was destroyed during a police chase last year that, according to a May 2018 Progress Times article, ended when the driver struck another vehicle on that street.

Sparks said that vehicle crashed against his butterfly statute, sending it flying several feet and landing near the entrance of the building.

“I was really dejected when it happened since I spent three months painting that statue,” Sparks recalled. “I remember deciding to install it here since everyone loves the Dallas Cowboys and was thinking of not making a second one, until Maxilou convinced me otherwise.”

The UVAL was responsible for creating butterfly statues in 2016 that were installed in more than a dozen locations all over the city. According to Link, people can either purchase a blank butterfly statue for $550 that they can decorate, or request that the UVAL paints it and installs it for $1,000.

The statues are mostly fiberglass with steel wings that Sparks said took him three months to paint per butterfly statue.

“I was saddened when the first statue was destroyed, “ Link said. “I was happy no one was hurt and that it didn’t hit his building, but it was sad for our butterfly. It’s not easy making one.”

According to Link, the amount of butterfly statues throughout the city is growing.