It’s been a historical season for the Pioneer Diamondbacks’ baseball team and if head coach Casey Smith and his players have anything to say about it, there’s plenty more history to be made before this season is over.

Their two-game-to-one regional semifinal round series win over Boerne Champion last weekend was just the latest chapter in their epic story which began way back on February 18 with their first non-district game, continued March 12 when they took on their first District 31-5A opponent and was extended even further May 3 when they began what is now their historically deep run in the UIL state playoffs. 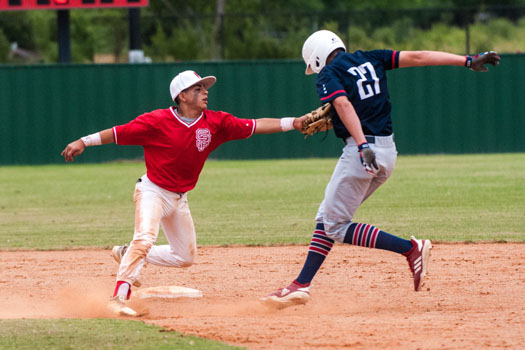 Prior to this season, the deepest a Diamondbacks’ baseball team had advanced into the state playoffs was the area round. Their fourth round, or sweet 16, series win over Boerne Champion last week now has Pioneer in the regional finals, three rounds deeper than their previous high watermark.

Let’s look back at each of the previously mentioned steps the Diamondbacks have taken along this fantastic journey into the Pioneer High School record books.

District 31-5A Schedule
The Diamondbacks put together an impressive 11-3 District 31-5A record this season, with their three losses coming at the hands of eventual playoff teams; Palmview Lobos (2-1), Sharyland Rattlers (4-3) and Rio Grande City Rattlers (7-5). However, the Diamondbacks avenged each of these losses by defeating these same three playoff-qualifying teams once each in district play by scores of 2-1, 7-6 and 6-5 respectively.

While the Diamondbacks fell one game short of sharing the district championship with Sharyland, their second place finish set a new high in team history with their previous high being last year’s fourth place finish.

Bi-district Round
As the district’s second seed, the Diamondbacks took on District 32-5A’s third place team, the 9-5 Brownsville Lopez Lobos, in the bi-district round of the playoffs.

Their one game winner-take-all playoff only went five innings as the Diamondbacks cruised to a 10-0 victory over the Lobos to claim their second consecutive bi-district championship.

Area Round
In the area round, Pioneer took on the state’s No. 2 ranked team, the 15-1 (32-3-1 overall) Corpus Christi Veterans Memorial Eagles. Seeing as how Valley teams are supposed to lose to Corpus Christi teams in the playoffs and how the state’s No. 2 ranked team is supposed to beat unranked teams, the Diamondbacks were not given much of a chance of upsetting the Eagles. However, somebody must’ve forgotten to tell the Diamondbacks this because after losing the first game of their best-of-three series by the lopsided score of 11-1, Pioneer bounced back to take games two and three by scores of 2-1 and 7-2 respectively.

Regional Quarterfinal Round
In the third round of the playoffs, the Diamondbacks went up against a familiar opponent, the 10-4 (24-10-1 overall) Rio Grande City Rattlers. The fact that all four District 31-5A playoff teams advanced into the third round resulted in head-to-head matchups between the four teams. Having split their two regular season matchups against each other, the Diamondbacks and the Rattlers did the same with the first two games of their best-of-three series. Therefore, it all came down to the third game which despite a three-run, seventh inning by the Rattlers, Pioneer took by a score of 5-4.

Regional Semifinal Round
Having already upset a No. 2 ranked team, the Diamondbacks found themselves in the unenviable position of being matched up against the team that took over that exact same spot in the rankings, and one of the hottest teams in the state of Texas, the 16-0 (34-5 overall) Boerne Champion Chargers in the regional semifinal round.

Not only had the Chargers gone undefeated since March 9, they swept their three previous playoff series in straight games and outscored their playoff opponents by a combined total of 63-3.

Much to everybody’s surprise, except the Diamondbacks and their fans of course, Pioneer proceeded to not only take two out of three games from another No. 2 ranked team, but they scored a total of 23 runs against a pitching staff that had only given up a total of three runs in their previous six playoff games!

Regional Final Round
Now that we’ve looked back at the Diamondbacks’ historic path to the regional finals, or Elite 8, let’s take a look at their matchup against the Sharyland Rattlers from Coach Casey Smith’s perspective.

As a former assistant at Sharyland High under Rattlers’ head coach Bart Bickerton, Smith is not exactly looking forward to going up against his mentor.

“I was his assistant for I believe six or seven years,” Smith said about Bickerton. “I really don’t enjoy playing against him and I don’t think he enjoys playing against me. I did talk to him about this and one of the things we talked about is how special this is. I’m approaching this from the standpoint of coaching to the best of my ability and having fun doing it. He and I talked about just enjoying the moment so I think this is going to be fun.”

One of the strange things about this matchup is the fact that Smith predicted it to Bickerton long before the playoffs started. Smith even sent Bickerton a text stating that their two teams would meet again in the regional final round and he told Bickerton to take a photo of the text so that he would be sure to have it when it came true.

How did Smith predict such an unlikely scenario long before it happened? Simply put, it was divine intervention.

“I just knew,” Smith said. “It was told to me in my prayer life. I don’t know what your beliefs are or how you feel about faith, but it’s just something that was revealed to me. Very, very strongly and continually over and over again, so I knew that it was something obviously beyond us. That’s about the only way I can explain it.” “I knew it and I even went so far as to send him a text on that,” Smith added. ”Even when he was playing that last game against Tivy, I wasn’t worried about him losing because I knew he was going to win. It was foretold to me and that made it kind of special.”

With the rivalry that has developed between the two schools over the years, and with so much on the line, there’s no telling how the players and the fans will react to such a huge matchup between two teams from the same community. However, Smith is not at all concerned about things getting out of control.

“I guess it’s a rivalry but we’re different as rivals because we respect the hell out of each other,” Smith said. “I’ve got tons of respect for him (Bickerton) and I know he has respect for us. We respect how they do things. Their kids do things right. They’re well behaved and of high character. And we feel the same about our kids.”

“So while we are rivals, because we’re from the same district and we play each other, we’re happy for their success which is a rarity in today’s society. And what it comes down to is that we have a relationship that goes way beyond whatever happens on the baseball field,” added Smith.