It was a standing-room only crowd last night as more than 5,000 fans lined up at the UTRGV Stadium last night to witness the Sharyland Pioneer Diamondbacks withstand a seventh inning rally to defeat the Sharyland Rattlers 7-6 in Game 1 of their best-of-three 5A Region IV Finals series at UTRGV. Pioneer had built leads of 5-1 and 7-3 before the Rattlers scored multiple times in both the sixth and seventh innings to keep it close.

The Diamondbacks got an RBI single from Ray Hernandez and a homerun from Evan Maldonado to lead 2-1 after five innings. The two teams combined for ten runs in the game’s last three innings. Pioneer scored once in the fifth and twice in both the sixth and the seventh courtesy of a number of Rattlers fielding and throwing errors. 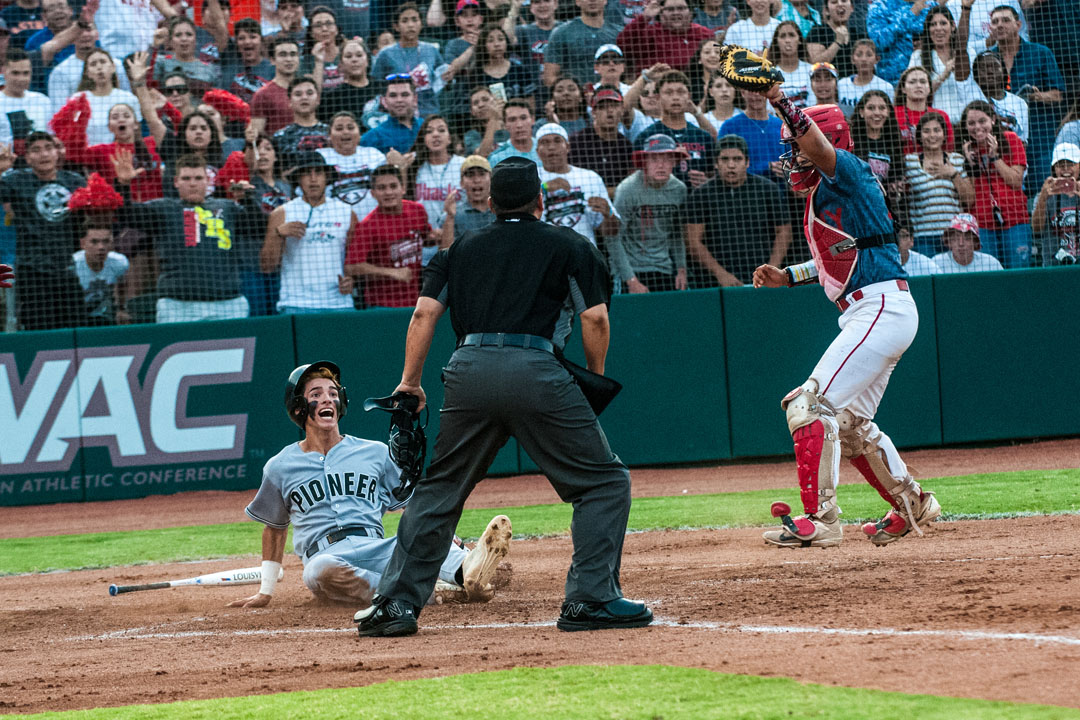 Pioneer gave the Rattlers two runs on two errors of their own in the sixth but held on for the win as Sharyland fought back with a walk and four hits in a three run seventh. The Rattlers got RBIs from Saul Soto, Diego Pena and two from Randy Garcia to keep the pressure on Pioneer.

The Diamondbacks got a six plus inning effort from pitcher Jacob Rosales who left the game with two outs in the seventh due to pitch count. Johnny Lugo came in for Rosales and induced a groundball to secure the final out.

Rosales recorded only one clean inning on the night but helped himself with some nifty fielding plays. One of those involved snagging a line drive for one out in the second and throwing it to third base to pick off a Rattlers runner for a double play to thwart a potential big inning.

Pioneer coach Casey Smith echoed his pitcher’s comments. “I think the key to it (the victory) was just staying in the fight. We know every time we play Sharyland it’s a knock down drag out battle.”

The loss puts Sharyland into their third straight 0-1 hole in this year’s postseason. The Rattlers, however, have not lost an elimination game yet. Sharyland coach Bart Bickerton emphasized the need for a quick start to keep their season going.

“We’ve been in this situation three times already,” said Bickerton. “We’ve got to come out early and start the way we finished tonight.”

Game 2 is scheduled for 7 pm tonight at the UTRGV baseball stadium.