Going into this season, the Sharyland Rattlers’ baseball team was not expected to accomplish anything special.

Sure they were coming off a season in which they were the District 31-5A runner-ups and yes they did go on to win a bi-district championship, but while they were expected to contend for one of the district’s four playoff spots this year, they really weren’t considered to be district champions or post second round playoff material. 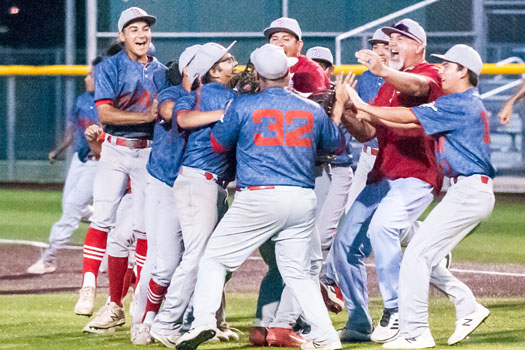 Much to everybody’s surprise, not only did the Rattlers take the district championship but they now find themselves just two wins away from qualifying for the state’s final four for the first time in school history.

While those two wins will have to come against the Pioneer Diamondbacks, who are not only cross-town rivals but are also coached by Rattlers’ head coach Bart Bickerton’s former assistant Casey Smith, the Rattlers’ players and coaches know that they might never again have such a great opportunity to win a state championship so it’s on for this best-of-three series.

But before we take a look at this unprecedented, and highly unlikely, matchup between the Rattlers and the Diamondbacks, let’s take a look back at how the Rattlers overcame the odds to get to where they are today.

Non-district Schedule
While non-district games do not factor into district standings or playoff seedings, they do go a long way towards helping teams prepare for district play. In addition, for those teams that do qualify for the state’s final four, their overall record, which includes non-district games’ results, does determine the four teams’ seeding. While I’m sure that final four seeding was the last thing on Bickerton’s mind when he and his Rattlers went up against their non-district opponents, they did put together an impressive 15-2 record most of which was in tournament play.

District 31-5A Schedule
After early losses to Palmview and Pioneer, the Rattlers seemed to be on the track to mediocrity as they got off to a rather unimpressive 3-2 start in District 31-5A play. However, they then proceeded to string together nine straight wins to not only finish district play with a 12-2 record but also to claim the district title. While the Rattlers did split their two game series against Palmview and Pioneer, the fact that they took both games against preseason favorite Rio Grande City was what put them over the top and allowed them to begin what has become a story book season like none other in Valley high school baseball history.

Bi-district Round
In the bi-district round of the playoffs, the Rattlers and the 7-7 (12-19 overall) Edcouch Elsa Yellow Jackets faced off in a one game, winner-take all, matchup. In that game the Rattlers put eight runs on the scoreboard in the first inning and went on to defeat the Yellow Jackets by a score of 17-0.

Area Round
Having claimed their second consecutive bi-district championship, both against Edcouch Elsa, the Rattlers’ area round opponent was a team many considered to be one of the state’s preseason favorites, the 12-4 (26-8-1 overall) Corpus Christi King Mustangs. In that best-of-three series, the Rattlers wasted no time taking game No. 1 by a score of 6-3 and game No. 2 by a score of 2-0 to earn the Rattlers their first area championship since the 2013 season.

Regional Quarterfinal Round
With the four District 31-5A playoff teams having swept the Corpus Christi area teams in the area round of the UIL state playoffs, the Rattlers found themselves matched up against a district opponent, the 9-5 (21-11 overall) Palmview Lobos, in the regional quarterfinal round. In game No. 1, the Lobos handed the Rattlers a 1-0 loss in nine innings. However, the Rattlers bounced back to take game No. 2 by a score of 5-3 and game No. 3 by a score of 2-1 to take the best-of-three series two games to one and move on into the regional semifinal round.

Regional Semifinal Round
With four championships under their belt, the Sharyland Rattlers were still hungry for more. However, in order to claim championship No. 5, they would have to get past the 12-2 (30-13 overall) Kerrville Tivy Antlers in a best-of-three series. Game No. 1 of this series was played in Victoria, Texas and despite having a 3-1 lead going into the seventh inning the Rattlers fell to the Antlers by a score of 4-3. Games No. 2 and 3 were then moved to Cabaniss Field in Corpus Christi. That was where the Rattlers did indeed claim their fifth championship of the season with 7-3 and 4-3 (in extra innings) victories.

Regional Final Round
Having completed our look back at how the Rattlers reached the regional final round of the UIL state playoffs for only the second time in school history let’s take a look at their matchup against the Pioneer Diamondbacks from Coach Bickerton’s perspective.

When asked what going up against a sister school’s team with so much at stake in this series means to him, Bickerton said, “It’s become a huge rivalry between our schools; in everything like basketball, football and everything else. Which is good, and that’s the way it should be. But it definitely adds a whole different element to this series which is something that we’ve never been through before. It’s almost like playing another district game for all the marbles. It’s strange to me to be in this situation.”

“Just take a look at the fact that Pioneer was down to their last strike against Corpus Christi Vets, a team that went to the state tournament last year, and the team that we beat, Kerrville Tivy, was in the regional finals last year,” added Bickerton. “So we’ve beat some good teams to get where we are today. Teams with plenty of playoff experience and teams that have gone the distance.”

The fact that Pioneer head coach Casey Smith was once an assistant to Bickerton adds another level of intrigue to this series. However, what Bickerton can’t get over is the fact the Smith predicted this matchup long ago.

As for what it’s like for him to go up against a former assistant, and a close friend, like Smith, Bickerton said, “Really, I can’t stand it. We both hate playing each other because not only do we each not like seeing each other lose, but we have to change everything we do when we play each other. With him coming up through our system, he knows exactly what we’re trying to do. So we have to change to wrist bands and that really changes the way we play. It’s a strange situation.”

The fact that his team is not made up of any superstars is something that Bickerton takes a lot of pride in.

“Both of our teams have played very well to get to this point, but they have some superstars and some D1 (Division 1) kids and we don’t have anything,” Bickerton said. “We don’t even have a kid that’s been signed, even to a junior college. But if you play defense and throw strikes, you can beat anybody. And both teams have done that.”