A national initiative that was implemented in the Sharyland school district last August to better connect students and teachers will expand to other campuses this coming school year. 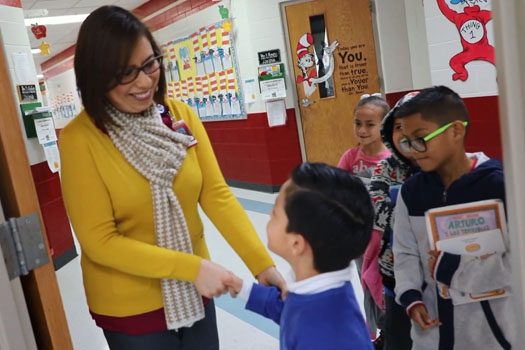 The program aims to have students and teachers build relationships with each other to boost children’s self-esteem in school. It was introduced at Lloyd & Dolly Bentsen Elementary, Olivero Garza Elementary and Jessie L. Jensen last year where teachers and staff had to go through a two-day training for the program.

“We focused on the schools with the highest population of economically disadvantaged students at the elementary level,” Carolyn Mendiola, assistant superintendent for student services and community relations said. “Studies show there is a correlation between academic achievement and socioeconomic status unfortunately. Students may not have exposure to travel or something as simple as books or a computer for homework if they’re struggling at home. If a child doesn’t have that they tend to fall behind their peers who have all the resources readily available. It does make a difference.”

The program boosts self-esteem by having students in each grade level commit to “social contracts” where they agree on how they will behave in the classroom, in the playground and how they will treat their classmates and teachers.

Students also get to participate in daily affirmations where every day, a student gets to write a compliment to another student and post it on the affirmation wall, displayed in the hallways of the campus. That way, the student the letter was addressed to can see it. Teachers are also asked to individually give each student a handshake every morning so they can have a proper greeting when they enter the classroom.

“You can imagine what it’ll be like for a student to receive affirmation from their peers and adults, principal gets involved too,” Mendiola added. “That will have a big impact on a child, especially if they may not get that a lot at home. When you reach them at a personal level then obviously kids tend to be more productive academically, it improves their attendance and their self-esteem.”

Mendiola added that attendance across all three campuses has significantly increased since the program started while disciplinary referrals have decreased.

Mendiola said the goal is to have this program districtwide by the 2021-2022 school year.

“You don’t want school to be a burden for these kids where they struggle every day to get up and go to school,” Mendiola said. “You want them to actually be excited for school and to see their teachers and classmates. We’re starting young by capturing kids at the lower grades because as they transition to junior high, students start changing. Not just physically but socially and emotionally. So if we can build their self-esteem when they’re young, that will stay with them.”

With a higher self-esteem, Mendiola added that students will also be able to be aware of their own behavior and be responsible for themselves in the future, something she said will be a valuable life skill.

“As they get older and go out into the workforce or college where there won’t be much redirection from a boss or professor, they’ll be on their own,” Mendiola said. “So if students learn these skills at an early age, it will stay with them as a lifetime skill. It seems to be working. Sometimes we tend to focus on what the student is doing wrong when we should focus on what they’re doing right. This program reminds staff to focus on the positives and not just capture student misbehavior.”