That is the message on display on the electronic marquee at Sharyland Pioneer High School. And while those timely words of encouragement could have been meant for graduating seniors, they are extremely well suited for the Diamondbacks baseball team. That’s because no Sharyland ISD baseball team has ever gone as far into the playoffs as the 2019 Diamondbacks have, and while qualifying for the UIL State Tournament is an extremely impressive accomplishment in-and-of itself, every single member of the team have their sights set on a much more impressive accomplishment; winning a state championship. 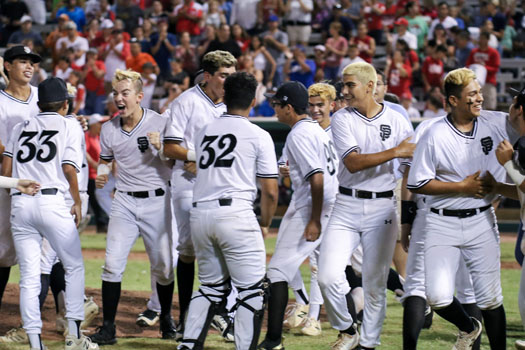 While their two games to none regional finals series win over the Sharyland Rattlers last week was the final step in the Diamondbacks’ long journey to the state tournament, one way or another their historic run is about to end. It may end as soon as tonight when the Diamondbacks take on the Georgetown Eagles in their one game, winner-take-all, state semifinal game. If however it does not end tonight, then it will end Saturday afternoon when the Diamondbacks take on the winner of the other state semifinal game between Colleyville Heritage and Corsicana for the UIL 5A state championship.

The Diamondbacks’ roster is made up of eight freshmen, two sophomores, eight juniors and five seniors. The fact that in only his second year at Pioneer, head coach Casey Smith has taken that mix of youth and experience and built a team that has not only won bi-district, area, regional quarterfinal, regional semifinal and regional final championships, but also defeated two No. 2 ranked teams in the state along the way, has to be one of the all-time great coaching jobs in Valley, if not Texas, high school baseball history.

However, as great a coaching job as Smith, and his assistants have done, it is up to the players to execute on the baseball field. And that is why we will be focusing on four members of the Diamondbacks’ baseball team as they share their thoughts on what has become a historic season for the Pioneer baseball program that could very well end in the Rio Grande Valley’s first ever UIL baseball state championship.

Senior pitcher Jacob Rosales is scheduled to be the starter against Georgetown tonight. He was the winning pitcher against Sharyland High in game No. 1 of that series last Thursday and he shared what that sweep of the Rattlers meant to him when he said, “It felt great. It’s something that we’ve talked about all year. A lot of people were saying that they were going to sweep us in two games, but sweeping them felt pretty good.”

While the Diamondbacks’ five championships thus far this season have turned most of their skeptics into believers, it was their area round championship over a No. 2 ranked team that made Rosales realize that a trip to the state tournament could become a reality.

“As soon as we beat Corpus Christi Vets I knew that if we could beat one of the best teams in the state, we could pretty much make it all the way,” Rosales said. “We’ve kept that mindset since then and here we are in state tournament.”

When asked what the fact that he and his teammates have not only made Pioneer High School history by advancing so far into the playoffs, but are now only two wins away from a state championship says about his team, Rosales said, “It says that we have a lot of fight in us and that we never give up. We were one strike away from being eliminated against Corpus Christi Vets but we stayed focused and we kept fighting. But at the same time, the fact that we’re always relaxed and having fun is what helps us to win games when we need to.”

Junior pitcher Evan Maldonado was the starting and winning pitcher against the Sharyland Rattlers in game No. 2 of their regional final series. He is also scheduled to start the state championship game Saturday should the Diamondbacks get past Georgetown. While being on the mound in a one game, winner-take-all state championship game may be too much pressure for some pitchers, Maldonado is looking forward to it.

“It means a lot to me to have that opportunity,” Maldonado said. “It’s going to be crazy, to be able to pitch in a state championship game, but I’m ready for it.”

When asked what he is looking forward to the most about the state tournament, Maldonado said, “Winning it. That’s what we all want to do, win the whole damn thing.”

Judging by the standing-room only crowds at UTRGV baseball stadium for both of the Pioneer vs Sharyland High regional finals games, it is quite possible that the Diamondbacks will have more fans at Dell Diamond for Thursday night’s game than Georgetown, which is not far at all from Round Rock, will have. Should that be the case, Maldonado for one will be sure to notice.

Like Rosales, senior right fielder Johnny Lugo is in his fourth year on the Pioneer varsity roster. Unlike Rosales however, Lugo was a believer in the Diamondbacks’ potential to make this deep run into the playoffs from the very start.

“I saw all the potential we had from the very beginning,” Lugo said. “Our pitchers and our hitters were all solid. Our defense was all solid during practice and that’s when I thought we had a chance.”

As for what it will mean to him to return from Round Rock as state champions, Lugo said with a laugh, “I don’t know but I do know that I will be touching my ring every day.”

Junior outfielder Alex Morales gets most of his playing time as a courtesy runner whenever the catcher gets on base. When asked what winning the state championship would mean to him, Morales said, “It’s what we’ve worked for all year. If we could do it, it would be great.”

Live streaming of the game can be found here.