The FBI is investigating a series of suspicious land deals that involve Alaniz, his sister and the city of La Joya — clear conflicts of interest that may involve criminal activity. 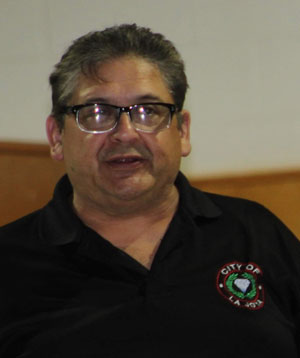 Questions about the land deals prompted Alaniz to resign after nearly 20 years at City Hall. June 30 will mark his last day.

“Obviously I’m making every effort, along with my client, to get to the bottom of this,” said attorney Rick Salinas of Mission, who represents Alaniz. “And whatever the investigation uncovers, that’s what it uncovers.”

Asked about the investigation, the FBI responded with a statement.

“The FBI can neither confirm nor deny the existence of an investigation,” said Special Agent Michelle Lee, a spokeswoman for the FBI.

The Progress Times spoke with three people who said FBI agents interviewed them about land deals that involved Alaniz, his sister and the city of La Joya. They provided information to the Progress Times on the condition of anonymity.

Mayor Jose A. “Fito” Salinas said he heard rumors about the investigation but hadn’t discussed the matter with Alaniz.

AUCTION PROMPTS QUESTIONS
According to three people with knowledge of the investigation, FBI agents asked questions about property purchased during a tax auction in August 2012.

Alaniz and his sister acquired five lots in the Palmshores Subdivision, according to Hidalgo County property records. Alaniz transferred two lots to La Joya in 2015. His sister, Blanca Valdez, sold a third lot to La Joya in 2017.

“I think that the big inquiry for La Joya, and for any other city, is when you’re either elected or employed by any municipality, you have no business dealing with yourself,” said Rick Salinas, the attorney who represents Alaniz. “And I’m not saying that’s what Mike Alaniz did.”

About two weeks before the auction, the La Joya Economic Development Corp. board authorized Alaniz to bid on property in the Palmshores Subdivision, which is located northwest of Walker Lake.

When the board met on July 27, 2012, the agenda included “Discussion and action, if any, regarding LJEDC bidding on Tax Foreclosed Property Lots located within Palmshores Subdivision,” according to a copy of the meeting minutes, which indicate: “A motion to go to second auction for possible purchase of lots was made by Ricardo Perez, Juan J. Garza second the motion, all in favor, motion was carried unanimously.”

The minutes, which aren’t signed, purport to document the meeting on Thursday, July 27, 2012. That date is actually a Friday. The minutes also fail to identify the specific lots that board members authorized Alaniz to purchase.

Garza, who is serving a 37-month prison sentence for conspiracy to commit wire fraud, said in an email that he didn’t remember the meeting. He suggested the minutes may be fraudulent.

Hidalgo County purchased about 4 acres near Mile 7 Road for $31,540, according to records kept by the Precinct 3 Constable’s Office.

Auctioneers sold the remaining property that afternoon during a tax re-sale auction, where the bidding started at rock-bottom prices.

Another bidder, which is listed on Precinct 3 Constable’s Office records as the La Joya EDC, purchased five lots in the Palmshores Subdivision.

“And Mike Alaniz did bid on some lots and won,” Hernandez said, adding that he remembered seeing Mayor Salinas at the auction too. “Fito Salinas was there, but he did not bid on anything. At least not that I remember.”

The La Joya EDC, however, never received the lots.

Who paid for the lots remains unclear. The Progress Times requested the documents on March 4, but La Joya refused to release the records.

“The checks, bank statements and other financial records related to the above land purchases by the city must be produced. Also, any minutes, meeting agendas related to these sale purchases of property. In the event there are no minutes or meeting agenda, please state so in the City’s response,” according to an email Kennedy Salinas sent to Alaniz at 8:26 a.m. on April 4. “Please be advised that these documents requested are public municipal documents of record and are subject to Public Information disclosure.”

Kennedy Salinas provided a copy of the email to the Progress Times. The city, though, never released the records.

The Progress Times filed a complaint with the Texas Attorney General’s Office, which sent the city a sternly worded letter on May 21.

Mayor Salinas and the City Commission discussed the complaint in executive session on May 30. Alaniz submitted a resignation letter the next day.

“I don’t know if that was the reason he resigned,” Mayor Salinas said. “But he had been talking to me about retiring.”

CITY BUYS SISTER’S PROPERTY
The documents may explain why Alaniz transferred two lots to La Joya in 2015 and why La Joya purchased a third lot from his sister in 2017.

Alaniz transferred Lot 217 and Lot 203 to La Joya in August 2015, according to corrected deeds filed with the County Clerk’s Office. He kept Lot 218.

“There were some weird changes in the ownership of those lots,” said Hernandez, who headed the homeowners association. “And by that I mean they were under Mike and under the city.”

Asked about the property transactions, Alaniz referred the Progress Times to his attorney. La Joya purchased a third property from his sister, Blanca Valdez, in 2017.

“The city currently has a sanitary sewer lift station on Lot 113, but it is also the location of the Homeowners association’s building,” according to the letter, which La Joya released under the Public Information Act. “It is Big ‘D’ Engineering’s recommendation that the City can look into acquiring a property located adjacent to the lift station to install a future water upgrade to the lift station.”

Valdez had acquired an adjacent property, Lot 112, at the August 2012 tax auction.

Alaniz suggested La Joya might be interested in acquiring the property, Guerra said, adding that Alaniz didn’t mention that his sister owned Lot 112.

How much the city paid isn’t listed on the deed. The city refused to release the payment records and any related documents, including conflict-of-interest disclosure forms.

Whether or not Alaniz had a partial ownership interest in Lot 112 is similarly unclear.

Mayor Salinas said he asked Alaniz about the purchase of Lot 112 but didn’t receive any answers.

EARLY RETIREMENT
Alaniz submitted his resignation letter on May 31, walking away from a nearly 20 year career with La Joya.

“It is with deep regret that effective June 31, 2019, I am retiring as City Administration from the City of La Joya,” Alaniz wrote, according to a copy of the letter provided by Mayor Salinas. “I would like to thank City Council for the opportunity in serving our great City. Most importantly my staff.”

The city scheduled a special meeting Thursday to accept the resignation letter and start advertising for a new administrator.

Alaniz taught math at the La Joya Independent School District before accepting the city administrator position in July 2000, according to personnel records. Along with supervising day-to-day city operations, he occasionally served as a municipal judge.

“It was a challenging job where you’re there to serve the community,” Alaniz said. “And I did my best at doing so.”

Alaniz, who is 55 years old, had planned to announce his retirement in July but submitted the letter early “due to circumstances.” He didn’t elaborate.

“I want to take a rest, hopefully,” Alaniz said, adding that he might attempt to complete his master’s degree. “And, God willing, I take it one day at a time and keep the faith.”