The Pioneer Diamondbacks are in the UIL state baseball tournament. As such they are one of only four 5A baseball teams that are currently two wins away from winning the highly coveted state championship.

However, each of the four teams must first win their state semifinal game to earn the right to play in the one game, winner-take-all, state championship game. 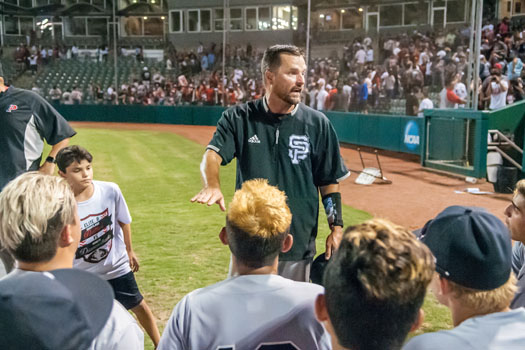 So let’s take a look at the four 5A teams that qualified for the state tournament and how they each earned the opportunity to compete for a state championship at Dell Diamond on this, the first week in June.

Sharyland Pioneer Diamondbacks
The Diamondbacks’ 11-3 District 31-5A record earned them a second place finish behind the Sharyland Rattlers. Their overall record heading into their state semifinal game is 35-8-0. Last year Pioneer posted a 24-13-1 overall record, placed fourth in the district and won a bi-district championship. The Diamondbacks are coached by Casey Smith who formerly coached the Mission Veterans Patriots. Smith has accumulated 201 career wins.

The Diamondbacks have six returning starters from last season. This includes senior outfielder and first baseman Jonathan Lugo, who was named second team All-State and the District 31-5A Offensive MVP last year, and senior shortstop and pitcher Jacob Rosales, who was named first team All-District last year as well.

Georgetown Eagles
The Georgetown Eagles are coming off a 12-0 District 18-5A record to claim the district championship. Their overall record heading into the state tournament is 39-4-1. Last year Georgetown claimed the district championship as well with a 14-0 record and advanced into the regional semifinals. They have been coached the past seven years by Adam Foster who has 151 career wins. The Eagles have seven returning starters from last year, including senior shortstop Cole Posey who was named All-District Defensive MVP.

Colleyville Heritage Panthers
Heading into the state tournament, the Colleyville Heritage Panthers posted a 38-3-0 overall record. As undefeated District 7-5A champions for the second year in a row, the Panthers are coached by Alan McDougal who has 336 career wins over 13 seasons. Last year the Panthers reached the regional semifinals. The Panthers have six starters returning from last year, three of which were named All State; Nick Balsano (catcher), Jacob Berger (pitcher, outfielder) and Bobby Witt, Jr (infielder and pitcher).

In the UIL state playoffs this season, the Panthers defeated the Denton Ryan Raiders in the bi-district round (1-0), the Burleson Elks in the area round (2-0), the Mansfield Legacy Broncos in the regional quarterfinals (2-1), the Amarillo Golden Sandies in the regional semifinals (2-0) and the Lubbock Monterey Plainsmen in the regional finals (2-0).

Corsicana Tigers
Like the Diamondbacks, the Corsicana Tigers did not win their own district championship. Their 8-4 District 14-5A record earned them a second place finish behind the 9-3 Cleburne Yellow Jackets. The Tigers overall record going into the state tournament is 30-10-0.

Corsicana is coached by Heath Autrey who has 282 career wins over eight seasons. Last year Corsicana posted a 20-9 overall record, and a 9-1 district record to claim the district championship. However, the Tigers fell in the bi-district round to A & M Consolidated two games to one.