The Sharyland Pioneer Diamondbacks historic season ended last night in Round Rock as they were defeated by Georgetown 8-2 in the semifinal round of the UIL 5A state baseball tournament.

Already having defeated some of the state’s higher ranked teams in getting here, Pioneer quickly showed the 7,000 plus fans crowded into Dell Diamond they were up to the task against another. 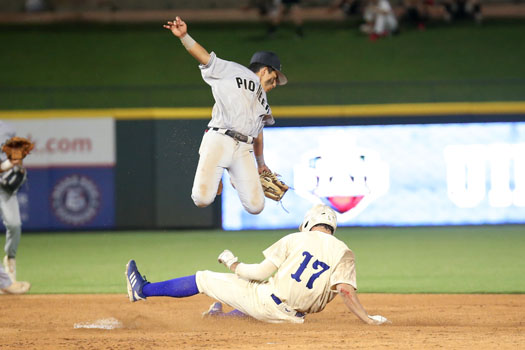 The Diamondbacks left then loaded in the second inning too, bringing about a pitching change for the Eagles. Pitcher Braxton Pearson got a strikeout to end the threat and then proceeded to shut down the Pioneer offense; at one point retiring nine in a row.

Despite the troubles at the plate the Diamondbacks only trailed 2-1 going into the bottom of the fifth. Rosales was holding down Georgetown too. He surrendered only two hits and struck out seven before being lifted in the fifth.

Georgetown sent 12 batters to the plate in that inning, scoring six times on seven hits, a walk and two Pioneer errors to widen their lead to 8-1. Pioneer scored a final time in the sixth courtesy of a bases loaded walk by Rivera to close out the scoring. The Diamondbacks finished the season with a record of 37-9.

The fifth inning was their undoing.

“We made a couple of errors that gave them (Georgetown) some momentum and they hit the ball,” said Pioneer Coach Casey Smith. “Give them credit. That’s a good ball club over there. They made us pay when we made some mistakes. That’s what good ball clubs do.”

Smith went on to talk about the inning and what he saw from his team. “I told them I was proud of them. We had that one big inning, a lot of things didn’t go our way . . . but they didn’t put their heads down. They kept fighting and grinding and as their head coach one of the things that makes me most proud about them is how far they’ve come and how much they’ve grown.”

Two players who were part of that growth were senior outfielders Fabio Valdivina and Pedro Tovias. Both were four-year varsity players for the Diamondbacks and reflected on their time at Pioneer and the 2019 season.

“The first couple of years were pretty tough,” said Valdivina. “I would have never expected us to be here. These past two years when coach Smith came in we bought into the process and we became a family.”

“It started my junior year. We got coach Smith and he just changed the culture and we bought into it,” Tovias said.

For how he would remember his final season ended, Tovias added, “It was amazing. To end it at Dell Diamond and it was one of our goals to be here.”

It was amazing, and not just because of where it ended. The journey to get there was pretty amazing too.