If you haven’t heard by now, the Sharyland Pioneer Diamondbacks swept past rival Sharyland Rattlers last weekend in the UIL 5A Region IV Final of the 2019 baseball playoffs.

The victories last Thursday and Friday at the UTRGV baseball stadium propelled Sharyland Pioneer to a spot in the 5A state tournament in Round Rock. They were scheduled to play Georgetown last night so by the time you read this their season may be over or they could be playing tomorrow for a state championship. Either way the Diamondbacks have had a magical season. 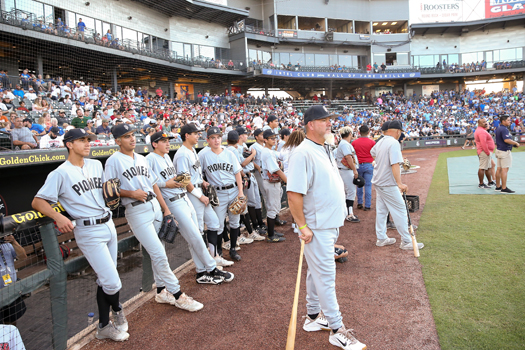 Of course it could have been very easy to switch everything from my opening paragraph to read Sharyland High instead of Sharyland Pioneer because last week’s regional final series marked a rare occurrence. Two teams from the same UIL district and the same school district, neighbor meeting neighbor for a spot in the state tournament. It was a matchup we should remember for many reasons, the least of which being who beat who.

First of all is the fact that so many of us got to watch the games. Remember it was perfectly within their rights for both Sharyland and Sharyland Pioneer to request and fight for the games to be played on their respective campuses. It would be easy to see why. With a state berth on the line who wouldn’t want the advantage of playing on one’s own field?

The fans won this one. The decision to play at UTRGV made the series more than a district rivalry. It became an event that brought in thousands each night, turning the ballpark into a sea of red. Fans started lining up more than two hours before the first pitch each night to claim their seats, arriving even before the teams. When they did, those fans cheered wildly as the players walked down to their respective dugouts.

The media was out in force too. I got to the press box an hour before the start of Game 1 only to find every seat in every booth taken by other writers and a group readying their equipment to broadcast the game via the internet. I texted my wife, “This is big time.”

The games themselves were not exactly masterpieces of baseball. Some of the long held truisms of the game were put to the test. Putting runners on base via a walk or hit by pitch will often come back to haunt you. So will giving the opponent extra outs. Getting the last out is always toughest. Each of these came into play throughout the series and each still holds true.

But then think about the pressure and scrutiny these games were played under. How would you like to have thousands of people watching you do your job? What about knowing others would watch it from their computers?

Websites, social media posts and newspapers would critique every action and decision you made. Then remember you were watching teenagers. Does it matter now if someone from your team struck out, failed to field a fly ball or made an errant throw? Celebrate the fact that through hard work and hours, weeks and probably years of preparation they were putting themselves out there for their family, friends, school and your entertainment.

This is not to say that the games were bad. Each had their moments. Twice in Game 1 when it looked like the Diamondbacks had put the game away the Rattlers fought back. Two hits for two runs in the bottom of the sixth.

Three more runs in the bottom of the seventh from four hits. Both the tying and winning runs on base before the Diamondbacks closed it out for a 7-6 win. Good stuff; and that was just the first game.

Despite the loss, the Rattlers came back ready for Game 2. They loaded the bases in the first inning and took an early lead before the Diamondback bats came alive. The 11-1 victory clinched the series for Sharyland Pioneer and set off the obligatory throwing off the gloves and jumping into a pile celebration that most of us have seen many times.

It was after that maybe the true significance of the series began coming into focus.

Sharyland Pioneer coach Casey Smith talked about how reaching Round Rock was a goal from before the season started. “I can’t describe it (heading to Round Rock) to be honest with you,” Smith said. “It was one of our goals to get there from the beginning of the year and to see it come to fruition with this group of kids is just unbelievable.” Thank you for showing us all that reaching big goals is possible.

Sharyland coach Bart Bickerton didn’t let the outcome of the two games change his perspective of what his team accomplished. “As you come into the season you always hope your team overachieves and does things that nobody else thought they would do and this group overachieved probably more than any other team that I’ve had at Sharyland,” Bickerton said. Thank you too. Isn’t going above and beyond something we would all want to do?

When the Sharyland Pioneer celebration ended something else took place. The two teams shook hands and walked back to their respective sides of the field. After huddling with their coaches for a few last words some of them took the time to seek out their opponents. Remember them? That rival from across town. Coach Smith came over to talk with Coach Bickerton. Players came too. The message was clear.

We may be adversaries on the field but we are still friends.
Being a good neighbor is more important than beating you in a game.
Just because we are rivals doesn’t mean there can’t be respect.
If these are the things we can take from this series than we truly all did win.