This article originally appeared in the Friday June 7, 2019 issue of Sharyland Times.

Years of memories for one family in Mission went up in flames last week after their house was destroyed in a fire.

Firefighters were dispatched to a home in the 3800 block of San Daniel Street in the Sharyland Plantation community Friday, May 31 at around 7:30 p.m. where they encountered a one-story home with the garage fully engulfed in flames. 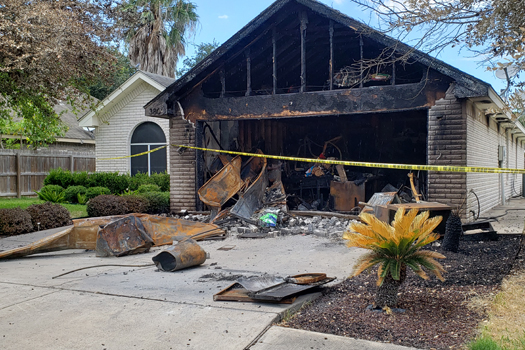 “It took us two hours to fight the blaze,” Mission Assistant Fire Chief Robert R. Alvarez said.
The house was purchased by Gabriela Ruiz and her husband in 2001. They lived in the four-bedroom home with their five children, Ruiz said.

“My husband and I had recently gotten married and we were ready to start a life together,” Ruiz recalled. “He got a job in Reynosa and we purchased the home in the area because we liked the community and how close it was to the international bridge and thought it’d be a great community to live in.”

“We were just staying in that night, relaxing after a busy week with the last day of school for all my kids,” Ruiz said. “Then my oldest daughter, whose room is next to the garage, said she smelled something burning, and we opened the garage door and all of a sudden black smoke covered us. My husband ordered all of us to get out.”

In the rush to leave the house, the Ruiz’s were able to grab their dog, car keys, cell phones and passports. They dialed 911 and waited for firefighters in front of their house, as they watched their home be consumed by fire.

“It felt like an eternity for firefighters to arrive,” Ruiz said. “Our kids were so scared that friends arrived to pick them up and take them away. It was just too much for them, I didn’t want them to stay and see the house. It’s so sad buying a place like this to see it get burned in one night.”

The fire, which is still being investigated by the Mission Fire Department, destroyed most of the inside of the house and everything in it, Ruiz said.

Her children, whose ages range from 8-17, are students with the Sharyland Independent School District. Ruiz said they were heavily affected by the fire.

“We’re all sad and stressed and staying at a hotel indefinitely,” Ruiz said. “The kids are frustrated and saying they miss home and want to go back home; they don’t know if they’ll ever go home or what will happen. It’s so many questions I can’t answer, it’s stressful.”

Local restaurants such as Raising Cane’s have even provided free meals to the family, Ruiz said. She said she hopes to use the money to find a “stable” temporary place for her family to stay in for the next few months.

“It’s amazing how you can ask for help and receive it,” Ruiz said. “I’m receiving support from the community in ways I didn’t think was possible. I want to thank the people for all this help, we don’t know each other but it feels like my family and I are not alone. We appreciate it.”