There are almost 180,000 people in the Rio Grande Valley living with a disability, and most are not prepared to deal with a disaster like a hurricane.

That’s according to research from The University of Texas Rio Grande Valley students taking a disasters studies course. The students presented their findings to area officials Tuesday, May 7 and the university released them last week at the eve of hurricane season. 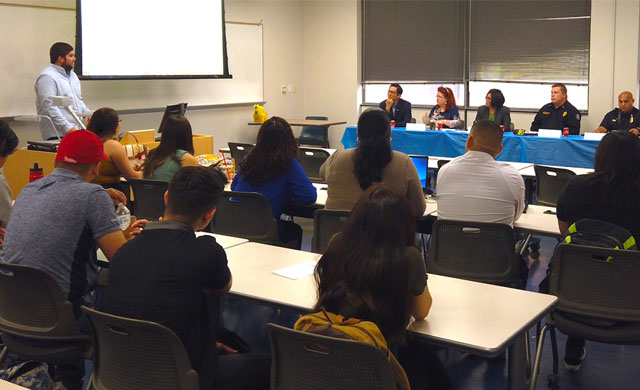 In their research, according to a news release from the university, there was a “disturbing” trend of unwillingness among area residents with disabilities to abandon their homes in favor of personal safety.

“It would seem those with disabilities do not want to further expand their knowledge or worry about disasters in their counties,” the report stated. “In addition, it would seem that because of this mindset, individuals do not believe that there is a possibility of a severe disaster occurring, and they will not be affected by it.”

The panel was done nearly a year after the June 2018 flooding that affected several counties and created hundreds of evacuations and millions of dollars in damages.

UTRGV senior Lisa Tresnicky was one of a group of UTRGV students who presented their research findings to local emergency management officials during the panel forum.
“We were surprised that so many respondents were unwilling to evacuate,” Tresnicky stated in the press release “That just showed how important it is that we share this information and that we spread the awareness of how critical it is that they do prepare and take a proactive approach to disaster preparedness.”

The study found that the disabled community were not adequately prepared for a disaster. The study theorized that “may be due to a number of possible reasons from financial difficulties, lack of access to disaster preparedness information and unaware of available resources in their communities.”

“Caring for the vulnerable individuals who are disabled in the Valley could lead to building disaster resilience,” the report stated.

Antonio Lopez, Weslaco emergency management coordinator, was one of the panelists attending. He said he is optimistic about future disaster communications in the Valley.

“By getting this research – and hopefully in the future continuing the collaboration with the UTRGV disaster studies program – this will give us all the data we need to continue improving,” he said. “We are a lot of times tasked with the response, the mitigation and the recovery of things,” he said. “We don’t have a lot of time to do that research. So, when we partner up with the university to bring that data to us, it’s going to make our response a lot better.”

Dean Kyne, a UTRGV assistant professor in the disaster studies program, said disaster preparation can be a very complicated process.

“Now the students know there are a lot of challenges for the preparedness, especially for the disabled population,” he said. “The complexity is there.”