The phone rang around lunch time.

“This is Dee from The Progress Times.” 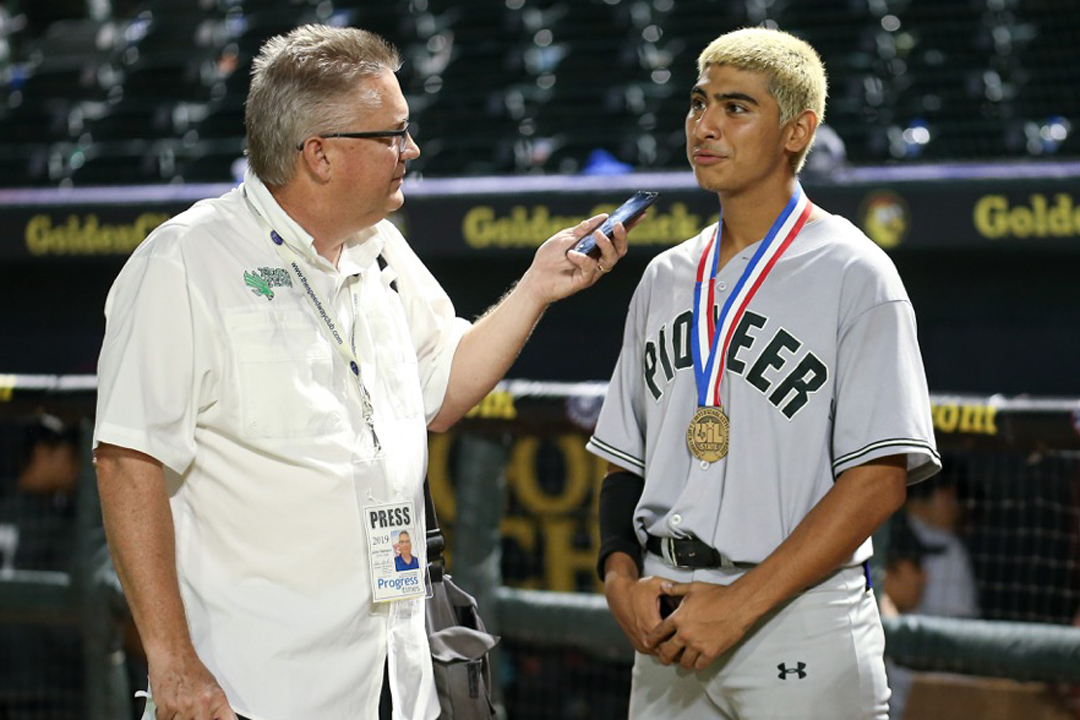 I had recently inquired about a sports writing position at the paper and figured the call was going to give me the chance to learn more about the job.

“Can you cover a game tonight?”

And so began what has now become a ten week journey into a side of the sports world that I had never experienced . . . asking the questions instead of answering them.

My first thought was to reach out to Matt, a buddy of mine who had done a bit of writing for some of the teams at the university we both attended. “Be objective, ask thoughtful questions, and probably the most important thing is to get the names spelled right,” he offered.

What followed was a call from Luciano, the paper’s sports editor who also writes and takes photographs for many of the games we cover. He brought me up to speed on what to report on and the rules that went into writing a story. Wait! There were rules? I gathered up a spiral notebook and headed off to my first game.

Once at the school, I walked into the dugout trying to act like I belonged so I could meet with Mario, my photographer for the night. I had never met him before so I just looked for a guy with a camera. Bingo! He asked if there was anyone in particular he should try to get shots of. I cautiously replied, “Everyone?”

Not yet in possession of an actual scorebook my notes were a bit unorthodox to say the least. Luckily I had retained enough past knowledge to remember how to record the basics of a baseball game which got me by until somebody entered the game as a courtesy runner.

Over the next few weeks I immersed myself in the world of baseball websites, researched those rules and started looking into the world of twitter. I found out there were lots of sites, lots of rules and I was probably too old to ever learn how to twitter. It wasn’t a few times this retired educator/coach thought he was in over his head.

It helped that I was starting at the perfect time. Both the softball and baseball seasons were coming to their conclusion and the games to which I was assigned brought out the best in everyone. By that I mean the players and coaches. I was still learning the art of thinking of the right questions to ask and hoping that I got everyone quoted correctly.

I’ve had the chance to see some well-played and exciting contests over the past few weeks, some of them historic in the annals of Valley baseball. I never dreamed that I would find myself covering games from the likes of the local university baseball stadium or going on the road to see a state semifinal game from the press box of a professional minor league team. The hospitality I experienced was genuine. I even had a fan thank me for taking the time to cover his team.

I’ve experienced all that athletic competition has to offer, seeing firsthand what the now defunct ABC show Wide World of Sports called, “the thrill of victory and the agony of defeat.” I told you I was old. Despite all of the above, it has been quite a ride. The experience has brought me back to a world I had left behind a few years ago. It’s nice to see it is still in good hands.

Whether it was watching a group of players sprint to the outfield to pose for pictures in front of the scoreboard after a big come from behind win, interviewing a pitcher who had waited a year to get the chance at redemption for himself and his team, or hearing from another who had no problems with being handed the ball with the game and season on the line, this generation of athletes is going to be just fine.

The people in charge are doing well too. I have had the chance to talk with coaches who embodied the determination to get things done the right way, the optimism to keep going after a tough night and the sportsmanship to give credit to their opponent no matter the outcome. We should all thank them for what they do.

I’ve got a few people to thank too. It would be selfish of me not to give credit to the people who gave me this opportunity and have helped me along the way. Luciano has kept me going with positive feedback and a patient approach as I learned (and am still learning) those rules. Both he and Mario have made my stories and game night social media posts come to life with those great pictures. Dee, too, for not immediately throwing my resume into the trash when she first saw it. I was a History major, I would have understood.

Finally I must thank my wife, who thought my retirement meant no more nights and weekends alone while I was out occupied with a game. As always, she has allowed me to pursue a passion and been a true supporter. The fact that she comes home to a clean house is probably helping too.

This experience has even changed me. I found myself sitting in a press box a few weeks ago watching one game, scribbling away in that same notebook and using my phone to check twitter for updates on another. Maybe I’m not so old after all.