The remarkable season for Sharyland ISD baseball is over. The Rattlers and the Diamondbacks went where no two Valley teams have gone before, a head-to-head matchup in the UIL’s regional finals between two teams from the same school district. And while their respective paths during this historic season were similar, they each had different obstacles and challenges to overcome along the way. 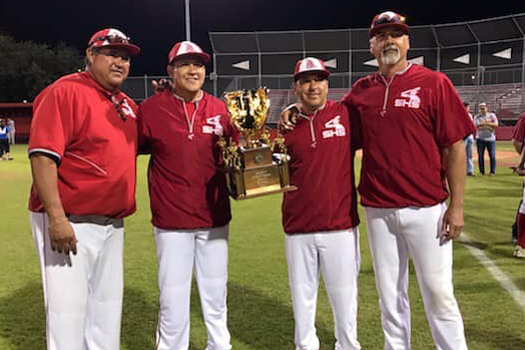 In the case of the Rattlers and the Diamondbacks, it was the latter of these two scenarios that coaches Bart Bickerton and Casey Smith mastered this season. While most Valley teams falter once they’re matched up against teams from the Corpus Christi area and beyond, Bickerton and Smith both had their boys believing that they were as good as, if not better than, any team or teams in the state.

With that in mind, we’re going to take a look back at both teams’ 2019 seasons, from their non-district schedules to their epic regional finals matchup, from their coaches’ perspectives. We’ll begin with the Rattlers this week, and we’ll follow that up with the Diamondbacks next week.

Non-district Schedule
When asked to share the importance of his team’s non-district schedule, in which the Rattlers posted a 15-2 record, and how it prepared his team for the battle the District 31-5A race would become, Bickerton said, “Our pre-district schedule was pretty much the three tournaments we participated in and two extra games. Our goal is always to win at least two of those three tournaments, but we ended up winning all three. So while we over-performed a little bit by winning those tournaments, which doesn’t happen very often, it showed how much depth we had with our pitching, which was good.”

District 31-5A Schedule
Despite their rather unimpressive 3-2 start against their District 31-5A opponents, the Rattlers finished strong by winning their final nine games of district play. In doing so, they not only compiled a 12-2 record, but they also claimed the district title. So what was Bickerton thinking when he saw his team at 3-2?

Bi-district Round
In the opening round of the UIL state playoffs, the Rattlers faced off against the Edcouch Elsa Yellow Jackets in a one game, winner-take all, matchup. While the Rattlers scored early and often against the Yellow Jackets to win by a score 17-0, Bickerton knew very well that his team has a history of underachieving in one game playoffs.

“The thing of it is that throughout Sharyland’s playoff history, one gamers have been a nightmare,” Bickerton said. “We’ve lost to some teams we shouldn’t have lost to just because we had all that extra pressure put on us. Luckily for us we came out and scored eight runs in the first inning against Edcouch and that relieved a lot of the pressure. We had to play one game at their field so we were in a bad position, but luckily we jumped on them early and that relieved everybody.”

Area Round
An the Area round, the Rattlers were supposed to host Corpus Christi King in game 1 and travel to Corpus for games 2 and 3 of their best-of-three series. However game 1 was moved to Corpus due to a wet field at Sharyland High. As it turns out, Mother Nature may have done the Rattlers a huge favor.

Regional Quarterfinal Round
The Rattlers found themselves matched up against a district opponent, the Palmview Lobos, in the regional quarterfinal round. As it turns out, the flip of a coin may have made the difference between whether or not the Rattlers would be getting past the Lobos and moving on to the fourth round of the playoffs.

“The big thing in this series was winning the flip,” Bickerton said. “They wanted to go with a one-game playoff and we wanted to go best-of-three. We knew their pitcher was going to be tough, but he was even better the second time against us than he was the first time. He threw more sliders and curve balls at us and we ended up losing 1-0 in nine innings. The key to that was getting into a three game series since we knew that we’d be able to come back even if the kid beat us in the first game and he did.”

Regional Semifinal Round
In game 1 of their regional semifinal best-of-three series against Kerrville Tivy, the Rattlers let a seventh inning lead get away from them. Even so, they bounced back to take games 2 and 3 to claim their fifth championship of the season.

“We were pretty much in command with a 3-1 lead in the last inning of that first game,” Bickerton said. “Andy (Lozano) had pitched probably his best game all year. But he hurt his foot and he started getting his fast ball up in the seventh inning. But with the bottom of their lineup coming up, we thought we were in good shape. However, all three of them got on base, and then we dropped a pop-up to lose the game.”

“But the kids responded,” added Bickerton. “They didn’t hang their heads in the hotel and they responded well when we came back to Corpus. I think they felt pretty comfortable going back to a place where they had already won.”

Regional Final Round
While the Regional Final round did not go the way Bickerton and his players would’ve liked, it was an opportunity for over 5,000 Valley baseball fans to see two of the best high school baseball teams in the state go head-to-head against each other on two consecutive nights. And while their two-games-to-none series loss to the Diamondbacks did bring an end to their otherwise magical season, that is by no means how the 2019 Sharyland Rattlers will be remembered. They will be remembered as only the second baseball team in Sharyland High School history to become regional finalists and they will be remembered as the team that not only overcame every obstacle and challenge they came up against, but also as the team that overachieved their way to five championships.