Patrol Corporal José Luis Espericueta, known to his co-workers as “Speedy,” was shot and killed in the line of duty last night, June 20, following 13 years of service with the Mission Police Department.

Mission Police Chief Robert Dominguez, surrounded by law enforcement officers and leaders from across the Rio Grande Valley, led the press conference informing the public on the details of Espericueta’s death this morning at 10 a.m. 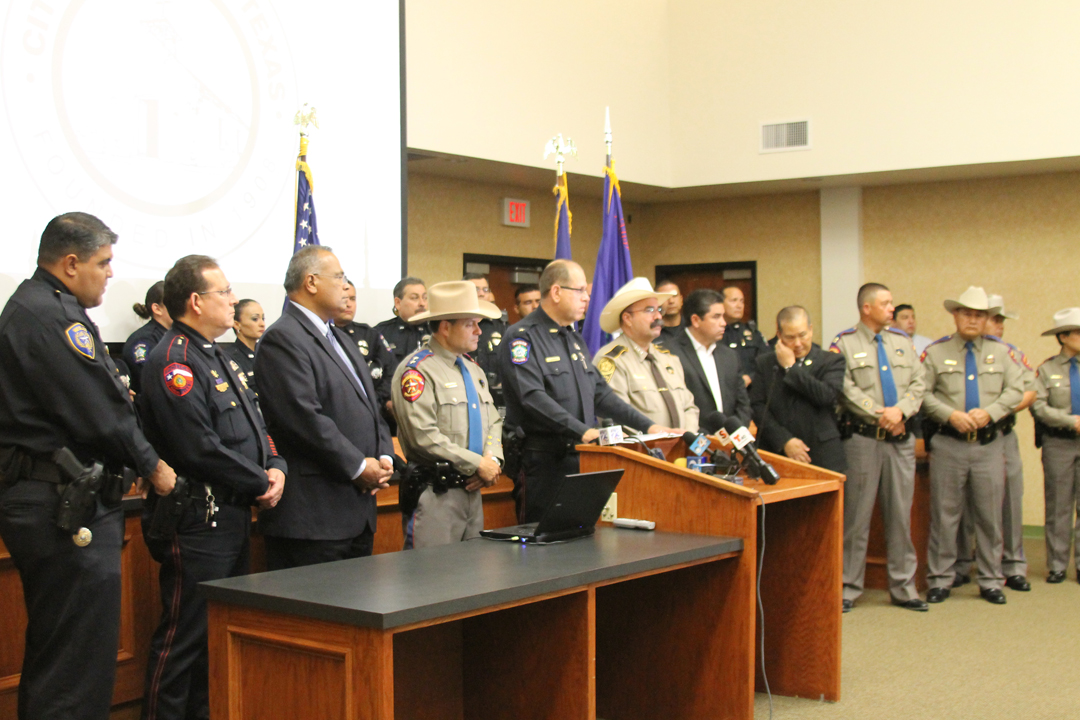 “It is with a heavy heart that I inform you of the passing of Mission Police Corporal Jos&eacute; Espericueta,&rdquo; Dominguez said. “Corporal Espericueta leaves behind his wife and two children.&rdquo;

The last time a Mission police officer was killed while on duty was in 1978 (Fulgencio Velasco III). During his tenure with Mission PD, Espericueta served the community in various capacities as a patrol officer, in traffic accident reconstruction, commercial vehicle operations and most recently as a patrol corporal, or a supervisor on patrol.

“Last night at approximately 8:05 p.m., a female waved down a Mission police officer in the area of Stewart Road and Business 83 here in our community,&rdquo; Dominguez said. “According to the female her son, identified as Juan Carlos Chapa, Jr., a 33-year-old Mission resident, had shot at her car with a handgun.&rdquo;

Espericueta arrived at the location to assist the local officer in trying to locate Chapa, who has a “lengthy criminal record.&rdquo; Dominguez said Espericueta observed Chapa walking at about the 1700 block of East Business Highway 83.

“Corporal Espericueta then tried to make contact with the subject, but the subject proceeded to run from the officers,&rdquo; Dominguez said. “As he was running towards the parking lot of Mission Bell [RV] Resort, he [Chapa] turned around and began discharging a weapon in the direction of Corporal Espericueta, striking him.&rdquo;

Gunfire was exchanged between Chapa and Espericueta, as well as other responding Mission police officers arriving at the scene. Espericueta was taken to the McAllen Medical Center via Med-Care EMS, where he succumbed to his injuries at 10:05 p.m.

Chapa was struck multiple times before falling, and was transported to the Rio Grande Regional Hospital where he was pronounced dead. Dominguez noted that an investigation by the Texas Department of Public Safety Texas Rangers office is currently underway.

“At this time, I would like to commend the McAllen Medical Center staff for working diligently and tirelessly for over an hour with Corporal Espericueta, as well as Med-Care ambulance services,&rdquo; Dominguez said. “I would also like to thank our federal, state and county law enforcement partners who assisted us last night and who continue to stand by us in our time of need.&rdquo;

Officers and law enforcement leaders came in droves to Mission CIty Hall for the press conference, standing by Dominguez and Mission PD&rsquo;s side for the duration of the event. Dominguez was in Austin yesterday, and he thanked Commander Joe Rodriguez for flying the chief home last night to get to Espericueta&rsquo;s family and fellow officers.

“I thank you [all] for being with us today,&rdquo; Dominguez said. “It is this type of relationship that we have as police officers that say a lot of what we do for our communities.&rdquo;

“My gratitude also goes out to the citizens of Mission and our local communities for the outpouring of prayers and support for our fallen officer, his family and our department,&rdquo; Dominguez said. “I know we&rsquo;ve received numerous calls from around the country, around the state and around our community. We have so many people calling us, and we are very appreciative of all of them and for standing by our officers in our community.&rdquo;

Dominguez expressed his pride in all Mission police officers and anyone in the line of duty for working in an “incredibly difficult environment.&rdquo; Later today, Dominguez will be meeting with Espericueta&rsquo;s family to make funeral arrangements, and will let the media know details as they come.

“At times, like we see today, this environment can be extremely dangerous,&rdquo; Dominguez said. “Our thoughts and prayers go out to his family, first and foremost, and also to the brothers and sisters that had the privilege to work alongside him over the last 13 years. I ask you to continue to pray in support of Corporal Espericueta&rsquo;s family, as well as our Mission Police Department family.&rdquo;