Police officers, firefighters and city officials gathered to honor the nation’s adoption of the United States flag in 1777.

In honor of National Flag Day, Mission held its first commemoration ceremony with WoodmenLife at the city hall on Friday, June 14. Representatives from the insurance company presented Mission with a United States flag and a special flag for the police department. 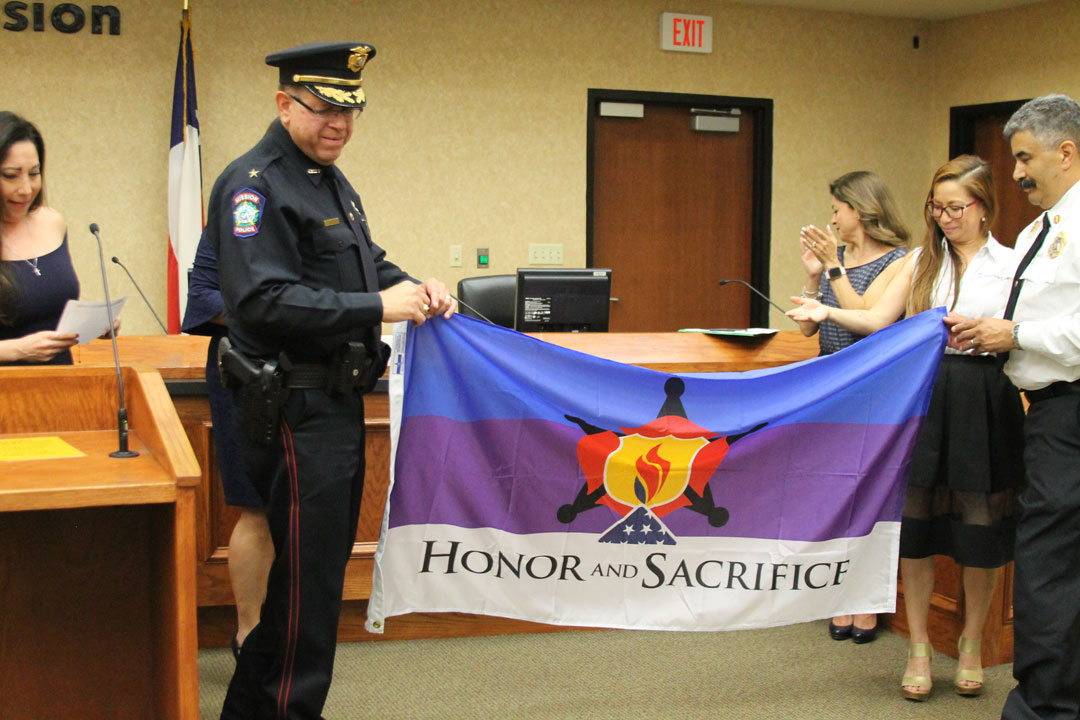 Roxanne Lerma, the head of the city’s Media Relations department, said that this was the first commemoration ceremony Mission has put on.

“On this day in 1777, if you didn’t know, the stars and stripes were actually adopted by Congress as the official flag of the United States,” Lerma said. “The American flag is important because the stars stand for the states in the United States, and the 13 stripes represent the original 13 colonies that came together to oppose the British.”

Lerma called the flag a statement of freedom and symbol of American values. Originally called the “Stars and Stripes,” the colors of the flag originally held no significance.

Service officers from the Mission Police Department and the Fire Department presented the colors at the start of the ceremony. Assistant Fire Chief Rene Alvarez led the invocation and pledge of allegiance.

City Manager Randy Perez gave the welcome for the event, and thanked people in attendance for coming to recognize flag day.

“Each year as Americans, we set aside four special days specifically to honor our veterans and those bravely serving in our military,” Perez said. “Sometimes we overlook these opportunities to pay our respects to recognize their sacrifice and service.”

Perez spoke on the importance of the creation of the flag and its role in representing the United States of America.

“And so, to commemorate the birth of our flag, we also rededicate ourselves to the ideals of which it stands,” Perez said. “Our flag is a symbol that flies above all our people as a sign of freedom, no matter what race we all are. So today let’s remember that, let’s honor our American flag.”

WoodmenLife Weslaco Chapter 2619 presented the U.S. Flag to the city, as well as The Honor and Sacrifice Flag for the police and fire departments. Nancy Collier represented the not-for-profit insurance company and said the flag was an emblem of the country’s heritage, bravery and liberty.

“We promote good citizenship and carry out extensive community service programs which include presenting the American flag,” Collier said. “WoodmenLife ranks second only to the U.S. government in the purchase of the U.S. flag, which we present to non-profit institutes and organizations.”

In addition to the flag, WoodmenLife provides equipment to fire departments, rescue squads and communities they represent, according to Collier. Raquel Marquez, an agent at the Weslaco Chapter, spoke on the meaning of The Honor and Sacrifice Flag that was presented to the Mission Police Department and Mission Fire Department.

“The Honor and Sacrifice Flag was developed specifically to recognize the fallen in all fields of public safety,” Marquez said. “It enables Americans to express their gratitude for men and women who heroically give their lives and pay tribute to the family and friends who grieve their loss.”

Marquez went on to explain what each color and emblem on this particular flag represents. The blue field symbolizes the law enforcement community, the purple field stands for mourning for losses in the firefighter community and the white field represents the “purity of heart” within each individual who serves and protects and is “willing to face each day’s challenges regardless of risk.”

“The black star represents those who wear the distinct badge including sheriff and marshal services,” Marquez said. “The red maltese cross recognizes all individuals in the emergency response community, the gold shield recognizes all public safety representatives who wear the shield and have made the ultimate sacrifice in the line of duty.”

“The folded flag signifies the final tribute to an individual life that a family has lost for the sake of others and the flame is an eternal reminder of the spirit that departed this life yet burns in the memory of all who knew and loved that individual,” Marquez added. “We honor their selfless services and remember their individual sacrifice.”