The 2019 All Valley Sports Awards Banquet was held last week to honor the efforts and achievements of high school athletes from across the Rio Grande Valley. Six of the Big 7 schools had at least one nominee for an award. The list included five female athletes up for six awards and four male athletes up for five awards. In addition, three Big 7 teams were in the running for Team of the Year in their respective sport and one school was nominated for Program of the Year.

By the end of the night two Big 7 athletes, one of the three teams and the one school were chosen as winners for a total of five awards overall. 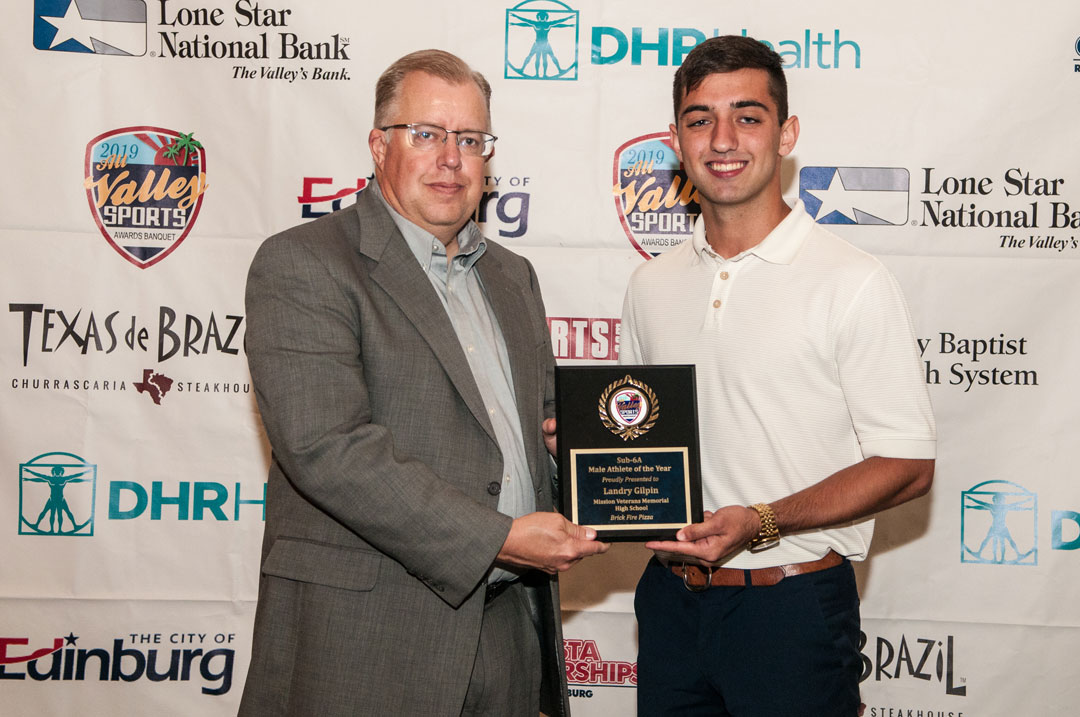 Landry Gilpin from Mission Veterans was a double winner.

The senior quarterback won his second straight Football Player of the Year award for his part in getting the Patriots to the fourth round of the playoffs last fall and an overall record of 14-2. The team was also nominated for the Sub-6A Boys Team of the year.

Gilpin reflected on the season and his role in it. “It wasn’t just a one year process. If anything it’s kind of been over the past few years. We’ve had some ups and downs but the way everything kind of developed and came together this year came from the building of chemistry with my teammates; being there every day for them and making them want to be that way . . . (to) show up every day and be a team player. That’s what we needed on a team like this and we got it out of those guys. We had a perfect mix of everything . . . to get us where we were.”

Gilpin also was tabbed as the Sub-6A Male Athlete of the Year. In addition to his gridiron feats, Gilpin was a three time regional qualifier for his role running relays on the Veterans track team.

Gilpin credited a number of people for his team’s and his own success. “Definitely my team, my team mates in every sport that I’ve done. Without those guys being by my side it would have been impossible. And without my coaches it would have been impossible. Those guys have been great the way they work with us and the way they have us training, They make us do everything the right way not only on the field but off the field.”

The head coach of the Patriots football team is Landry’s father David Gilpin and the younger Gilpin also thanked his parents and family. “Those guys are vital to the success we’ve had as a program and the success I’ve had as an individual. I’d like to thank all those.”

Landry will continue his football career this fall at Southwestern University in Georgetown.

Sharyland High’s Jimmy Lee won the Boys Golfer of the Year award for the fourth straight year. Lee added the title “State Champion” to his long list of accomplishments when he won the UIL- 5A State Tournament back in May. It was the culmination of four straight trips to the tournament in which Lee improved his place in the standings each year.

Lee was participating in a tournament and unable to attend the banquet. He is expected to play for Texas A&M in College Station next year.

It was a big night for Sharyland Pioneer too. The school had two of its athletes nominated along with their baseball team and overall athletic program.

Coach Casey Smith put the award in perspective to the numerous other accomplishments of his team this season.

“Obviously it’s an honor; there were some really good teams that were up for the award. Just to be considered among those teams is an honor.”

Perhaps the biggest win of the night was the recognition of Sharyland Pioneer as Sub 6-A program of the Year. In addition to the success of the baseball team the five year old high school achieved a rarity in athletics: all 21 of its teams qualified for the post season in 2018-19.

Ten of those teams won district championships. The Diamondbacks shared the award with Brownsville Veterans.

Sharyland Pioneer Athletic Coordinator/Football coach Tom Lee spoke on the reasons for that success. “It starts with hiring good coaches and we did a good job with that five years ago. Then we added some coaches in the last couple of years that have really created some good programs that you saw this year.”

The student athletes of Sharyland Pioneer played a role too. “Besides coaches I think it comes down to the kids believing in what the system is and what we’re trying to preach at Pioneer,” Lee added. “We’re trying to get kids to play multiple sports; to be successful not just in one thing but in as many things as they can to promote our sports program.”

Sophomore Alejandra Briere and senior Diego Serna were up for Girls and Boys Wrestler of the Year respectively.
Numerous other Big 7 athletes were nominated for their achievements as well.

Senior Jackie Howell of Mission Veterans was nominated in two categories; Sub 6-A Female Athlete of the Year and Volleyball Player of the Year. The Patriots volleyball team was also nominated for Sub 6-A Girls Team of the Year.

Senior Bailey Villalon from La Joya Palmview was nominated for Girls Cross Country Athlete of the Year and her classmate, Briana Silero was up for Girls Golfer of the Year.

Senior Mia Lerma from Mission High was also nominated for Girls Golfer of the Year.

The La Joya Juarez-Lincoln girls soccer team was nominated for the Girls 6A Team of the Year and the Huskies had junior soccer standout Sergio Escareno up for Boys Soccer Player of the Year as well.