In only his second year as the Diamondbacks’ head baseball coach, Casey Smith took a team that was consistently at or near the bottom of the district standings and turned them into a team that not only defeated two of the three top ranked teams in the state, but that also qualified for the state tournament.

Here we’ll take a look back at the Diamondbacks’ historic season, from their non-district schedule to their state semifinal game against the No. 1 ranked team in the state, all from Coach Smith’s perspective. 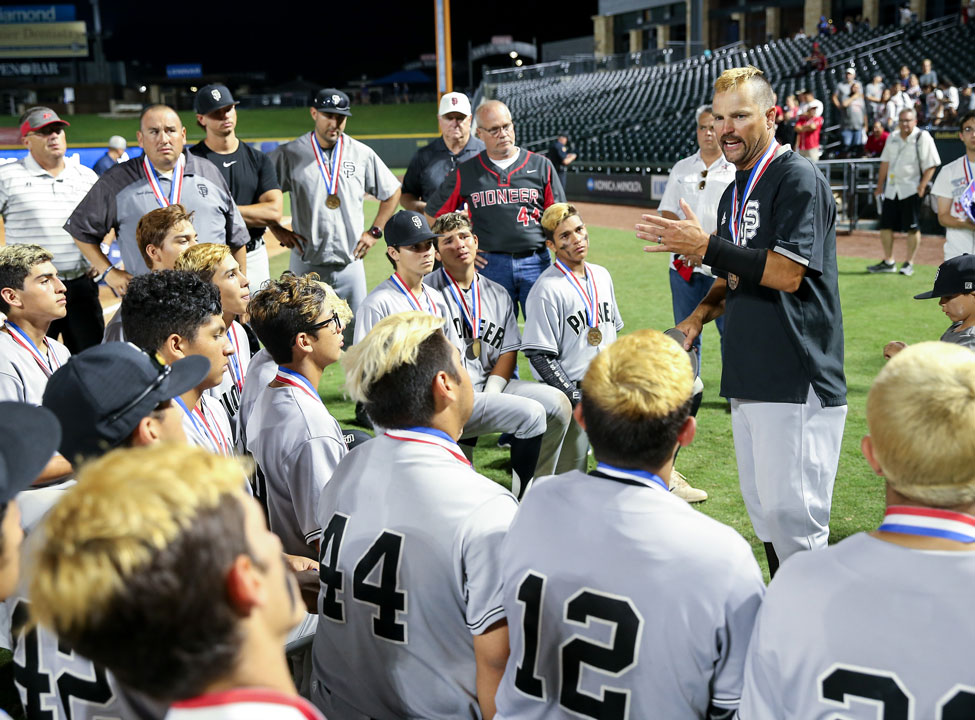 Non-district Schedule
Coming off their first season under Coach Smith, and their first ever playoff appearance, the Diamondbacks put together a very impressive 15-2-0 non-district record. What made that record even more impressive was the quality of teams they went up against during non-district play.

“We always try to schedule some tough opponents during our scrimmage season,” Smith said. “We went up to Calallen to play our first non-district game with the idea that if we play tough competition that it would make us better. We were very fortunate to see some good teams in our tournament schedule. We went up against quite a few playoff teams, several of which were 6A teams.”

District 31-5A Schedule
With the four District 31-5A teams that eventually made the playoffs all advancing into the Area round, 31-5A proved itself to be one of the toughest 5A districts in the state. What Smith remembers the most about his team’s district schedule, is how tough each of the two-game series against the other three eventual playoff teams were.

“Our two games against Sharyland were especially tough,” Smith said. “They were both one run games that were won with walk-offs. We each won one of those games. The same thing with Rio, both games were close and we won one and they won one. And against Palmview they won one 2-1 and we won one 2-1. So what sticks out to me the most is the level of competition throughout our district schedule. It was tough.”

Bi-district Round
In the opening round of the playoffs, the Diamondbacks went up against Brownsville Lopez in a one-game, winner-take-all match-up. While Smith would’ve preferred to play a best-of-three series, the one-game match-up worked out extremely well for Pioneer as they scored early and often against the Lobos.

“It was a 10-0, five inning win for us,” Smith said. “Our kids came out with a good mentality and we jumped on them early. I think we scored four or five in the first inning. That kind of put it away early and it wasn’t really close after that.”

Area Round
In the Area round, the Diamondbacks were matched up against the No. 2 ranked team in the state, the Corpus Christi Veterans Memorial Eagles. And despite the fact that Sharyland Pioneer lost the first game of that best-of-three series by a rather lopsided score, Smith knew that his team had what it took to bounce back and take the series.

“We got down early in the first game so I pulled my starting pitcher knowing that I could bring him back the next day,” Smith said. “The 11-1 loss looked bad on paper, but it wasn’t that bad of a game for us.”

In game 2 of that series, the Diamondbacks were one strike in the seventh inning from being eliminated. However, they found a way to snatch victory from the jaws of defeat to not only win game 2, but also game 3.

“Our kids just kept believing and kept fighting and that’s one of the things that has stayed consistent for us not only in the playoffs but throughout the season.” Smith said. “They never feel that they’re out of anything or that anything’s over. They just continue to keep coming back, keep fighting and keep playing until it’s over.”

Regional Quarterfinal Round
The Diamondbacks found themselves matched up against a district opponent, the Rio Grande City Rattlers, in the regional quarterfinal round. As was the case against Corpus Christi Vets, the Diamondbacks came up short against the Rattlers in the first game of their best-of-three series but bounced back to take games 2 and 3.

“That first game went extra innings which was no different from the Corpus Christi Vets series,” Smith said. “Our kids never blinked. They believed that we were going to go to Rio Grande City the next day and win game 2 and then get back to Mission to win game 3. I don’t think our kids ever waivered or ever had a doubt. The confidence has always been there.”

Regional Semifinal Round
In the regional semifinal round, the Diamondbacks were not only matched up against the team that assumed the No. 2 ranking in the state after Sharyland Pioneer eliminated Corpus Christi Vets, but also one of the hottest teams in the state, the Boerne Champion Chargers. How hot were the Chargers? So hot that they had not lost a game since March 9, and so hot that they swept their three previous playoff opponents, six games to none, while outscoring them 63-3 over those six games.

As impressive as the Chargers’ winning streak and playoff run had been, Smith and his Diamondbacks were not at all intimidated.

“Yes they were a good team and they were well coached, but we felt good about our team too,” Smith said. “Going into that series we had a lot of confidence and we were ready to go in and do what we do. In addition, we felt that playing them in Laredo was going to be a benefit for us because we were used to the heat and they weren’t.”

As it turns out, the Diamondbacks had good reason to be so confident. They took the best-of-three series against the Chargers by winning games one and three by scores of 6-3 and 11-0.

Regional Final Round
In the Regional Final round, the Diamondbacks defeated the Sharyland Rattlers in two games by scores of 7-6 and 11-1. With five championships under their belts, the Diamondbacks punched their tickets to the state tournament in Round Rock. When asked what being one of the state’s final four teams meant to him, Smith said, “I can’t describe it (heading to Round Rock) to be honest with you. It was one of our goals to get there from the beginning of the year and to see it come to fruition with this group of kids is just unbelievable.”

State Semifinals
In their state semifinal game, the Diamondbacks saw their epic 2019 season come to an end when they fell to the No. 1 ranked team in the state, the Georgetown Eagles, by a score of 8-2. While Smith and his Diamondbacks did come up two wins short of being the first Valley baseball team to win a state championship, they went where only a handful of Valley teams have ever gone, the state tournament. In doing so, the Diamondbacks overcame all the odds to put together a season unlike any Sharyland ISD baseball team has ever had, and a season that will long be remembered in the annals of Valley high school baseball.