When you have a successful year recognition usually follows. That was certainly the case for Sharyland Pioneer High School two weeks ago at the All Valley Sports Awards Banquet. Their big year translated into a big night as the Diamondbacks were recognized as the 2018-19 Sub 6A Program of the Year.

Even though they shared the award with Brownsville Veterans High it would be hard to find any school, anywhere, that could match what Sharyland Pioneer did this past season. 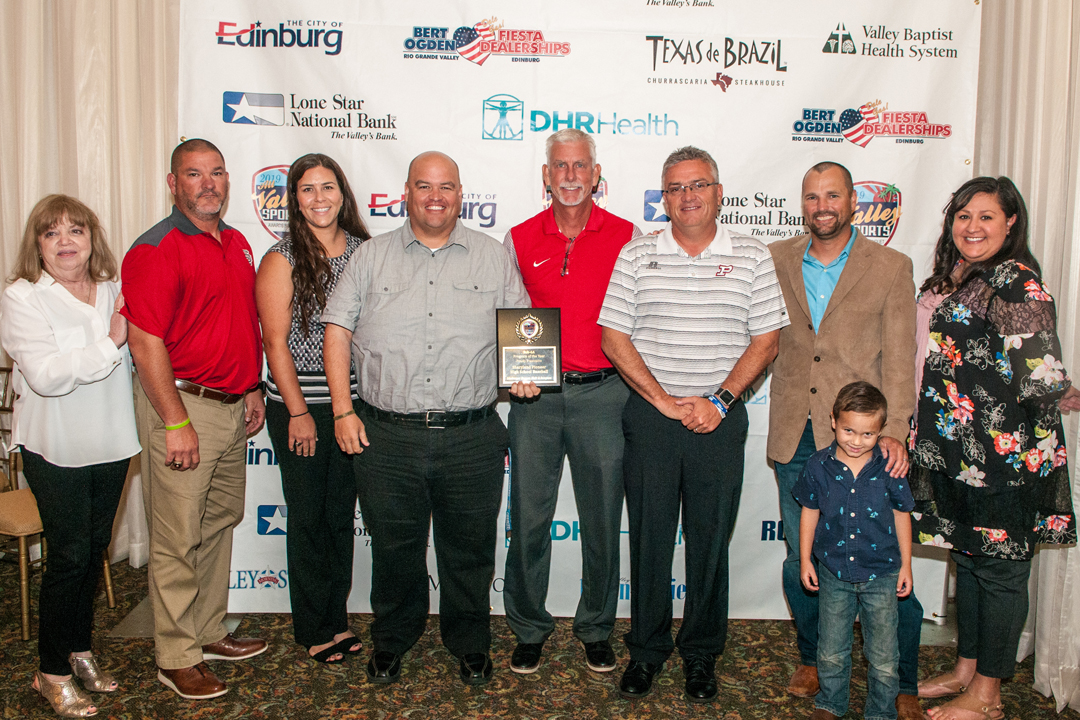 The five year old high school achieved a rarity in athletics: all 21 of its UIL athletic teams qualified for the post season in 2018-19. Ten of those teams won district championships and eight finished as runner ups. Five teams won bi—district titles, three won area titles and one reached the state semifinals. In addition a total of 17 athletes qualified for state competitions.

This is how each team fared for the year:

The District Champs
The boys cross country team got the year for Sharyland Pioneer off to a running start in the fall by claiming the first of those ten district titles. They went on to place tenth place at the Regional meet.

Two more district titles came through the efforts of the girls and boys wrestling teams. In addition, the girls finished third at the regional meet and qualified three individuals for the state meet. The boys finished fifth at regionals with two state qualifiers.

The girls and boys basketball teams also won their respective district races. The girls season ended with a loss to Brownsville Pace in the first round of the playoffs while the boys beat Pace before losing to Corpus Christi Miller in the second round.

Both the girls and boys track and field teams won district and area championships. The girls had a state qualifier and the boys had two.

The boys swimming and diving team won a district title, placed fourth at regionals and sent five individuals to the state meet.

The boys tennis team won the school’s tenth district championship for the year in the spring.

The Runner-Ups
The baseball team dominated the headlines for several weeks with their run through the state playoffs. After a second place finish in district the Diamondbacks won bi-district, area and regional titles on their way to a berth in the state tournament. Their season ended with a state semifinal loss to Georgetown.

The combined boys and girls tennis team placed second in district in the fall and advanced to the second round of the playoffs. They defeated Brownsville Porter in the first round before falling to Corpus Christi Veterans.

The Diamondback football team finished second in district play. They fell to Port Lavaca Calhoun in the first round of the playoffs.

The boys golf team finished second in district as did the girls. The boys finished fifth at regionals and had one individual state qualifier. The girls finished ninth at the regional meet.

The softball team also finished second in district. They earned a bi-district title by defeating Edcouch-Elsa before losing to Corpus Christi Carroll in the area round.

The girls tennis team finished second in district this past spring.

Other Postseason Qualifiers
The volleyball team qualified for the postseason with a third place finish in district. They were eliminated by Brownsville Veterans in the first round of the playoffs.

The girls swimming and diving team placed third at district and finished 10th at the regional meet.

The boys soccer team placed third in the district standings and were eliminated by Brownsville Veterans in the first round of the playoffs.

Help from the Sidelines
Throughout the season the Sharyland Pioneer program was supported by an award winning cheer squad. In 2019 the team finished as the UIL 5A Div. II state runner-up and placed fourth in a UCA national competition.

Behind the Success
So just what accounted for the incredible accomplishments of this year’s Pioneer teams?

Sharyland Pioneer Athletic Coordinator/Football coach Tom Lee spoke on the reasons for that success. “It starts with hiring good coaches and we did a good job with that five years ago. Then we added some coaches in the last couple of years that have really created some good programs that you saw this year.”

The student athletes of Pioneer played a role too.

“Besides coaches I think it comes down to the kids believing in what the system is and what we’re trying to preach at Pioneer,” Lee added. “We’re trying to get kids to play multiple sports; to be successful not just in one thing but in as many things as they can to promote our sports program.”

David Munson coaches cross country, golf and track for the Diamondbacks. He talked about the co-operative atmosphere that goes on within the program.

“We share our athletes,” he said. “It’s a lot of teamwork with the coaches to make sure if we have a good kid that can play multiple sports we make it possible for them to do that.”

Several of those athletes spoke about playing in the Pioneer program.

Lavar Lindo plays football, basketball and runs track for Pioneer. “The environment is very competitive,” he said. “I know my spot (on the team) is not set in stone so I’ve got to fight for it.”

As for sometimes starting one sport late because of how the seasons may overlap, Lindo commented on going from basketball to track. “It kind of transitions because in basketball we run a lot of liners and that helps me transfer over to track.”

Natalie Reyes played volleyball, basketball and ran track too. “All the coaches work well together,” she said. “It’s (moving between sports) smooth, but at the same time overwhelming. You have to understand what you need to put in and how to divide everything equally.”

Carly Hornaday went from basketball to track last year and offered this. “You have to be ready to adjust quick.”

It’s almost August and another year of competition is just around the corner.