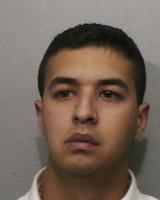 Faced with the prospect of a lengthy prison sentence, Ortiz struck a deal with federal prosecutors.

Wearing a yellow smock from the Aransas County Detention Center, where he spent the past few weeks, Ortiz stood quietly throughout the hearing. His attorney, Rick Salinas of Mission, did the talking.

After he pleaded guilty, the judge set bond at $75,000 with a $7,500 deposit. Ortiz must wear a GPS monitoring device and remain on house arrest.

Along with regular mail, DEA agents believe Rolynn’s Transportation, a contractor for FedEx, shipped marijuana and cocaine to buyers nationwide. They mailed back cash.

“It’s a very extensive organization with a wide reach across the United States,” said DEA Special Agent Suzanne Minnick, who testified last month during a hearing in McAllen.

Agents identified five FedEx accounts linked to drug trafficking, Minnick said. More than 70,000 pounds of packages had been shipped through the accounts, although investigators couldn’t determine what all the packages contained.

Public records don’t provide any details about what role Ortiz played within the organization. Prosecutors, however, prepared a lengthy factual basis for the plea, which ran at least nine pages long.

Investigators apparently believe Ortiz held a leadership role within the drug trafficking organization. His attorney disputed that characterization, which could complicate Ortiz’s attempt to receive a reduced prison sentence.

To avoid a 10-year mandatory minimum on the drug trafficking charge, Ortiz plans to cooperate with prosecutors.

If he provides what prosecutors deem “substantial assistance,” the government may file a motion for a downward departure. A federal judge will determine whether or not to grant the motion.

Sentencing is scheduled for Nov. 5.