The Espericueta family, Missionites and people from across the country mourned the loss of Police Corporal Jose Luis Espericueta this week.

Espericueta, who served the Mission Police Department for 13 years, was killed in the line of duty while chasing an armed suspect on Thursday, June 20, 2019. Affectionately known as “Speedy” to many, Espericueta leaves behind his wife of 21 years, Roberta “Bobbie” De Leon Espericueta and their two children: 19-year-old Brianna and 13-year-old Joaquin. 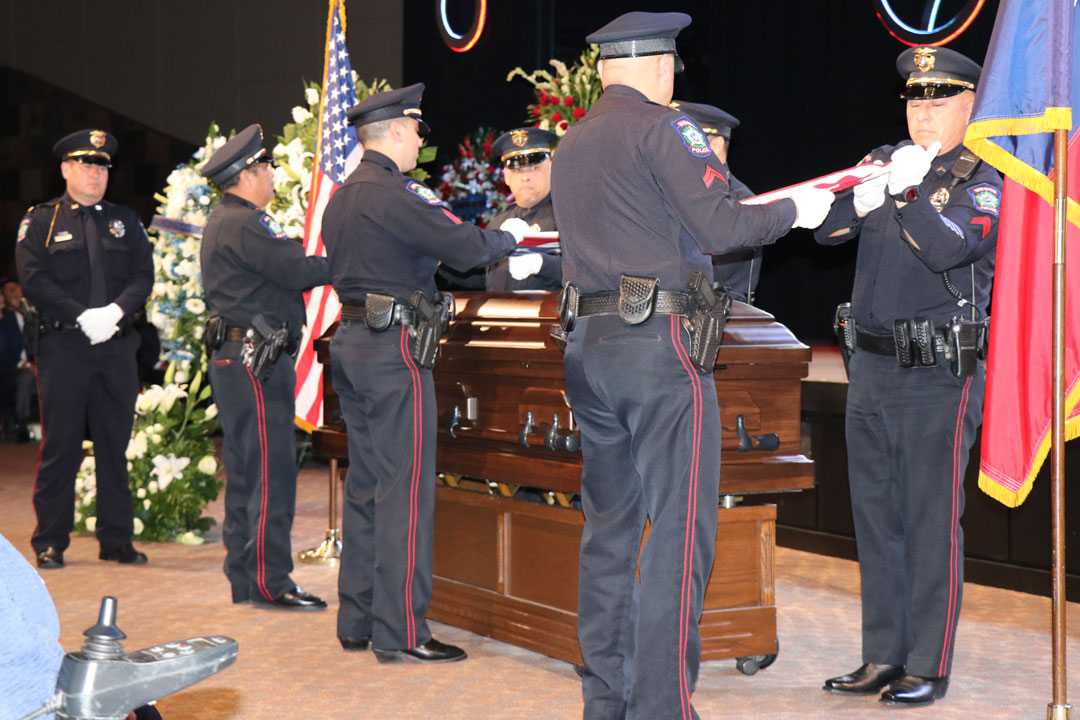 Visitation for the public was held this Mon., June 24 and the funeral mass took place Tues. June 25 at Palm Valley Church in Mission. The Police Department parked Espericueta’s vehicle outside the department as a kind of shrine in their fallen brother’s memory. It did not take long for red, white and blue flowers, American flags and balloons to adorn the memorial.

The services were led by Pastor Jerrell Jobe, who said the day was about remembering the life, honor and sacrifice of Corporal Espericueta.

Espericueta’s eulogy was given by Victor De Leon, Bobbie’s brother and Espericueta’s brother-in-law. De Leon said that Bobbie asked him not to be too serious during the eulogy, because that’s how Espericueta would have wanted it.

“As I was preparing these remarks I asked myself, ‘how would Joey like to be remembered?’” De Leon said. “While it’s true he dedicated his life to his career as a police officer, he also enjoyed his side hustle as our resident TV star.”

Espericueta appeared on A&E’s “Live PD” and National Geographic’s “BorderWars.” De Leon went on to speak on Espericueta’s passion for barbequing and the Dallas Cowboys.

“Joey was a man of many, many talents,” De Leon said. “He was the only person I knew that could make wearing Crocs cool, and faithfully wore cargo shorts everywhere he went, no matter the occasion.”

De Leon said when it came to barbecuing, Espericueta would spend the whole day preparing and cooking meat for everyone to enjoy.

“We all knew we were in for a treat when after a full day of tending to the meat, he would sample the first bite and we would hear him proclaim ‘esta pretty good,’” De Leon said. “That was Joey.”

Espericueta was awarded several honors throughout his career in law enforcement, including when he was honored for outstanding achievement for accounting for 668 arrests and 2,008 citations in one year. De Leon said that despite these accolades, Espericueta’s proudest achievement was being a husband and father.

“As some of you already know, aiming high runs in his family,” De Leon said. “His daughter Brianna is transferring to UT Health Science Center to become a nurse practitioner later this year. His son Joaquin will be trying out for football in middle school this year, and is well on his way to becoming a fine young man. And his high school sweetheart, his wife of 21 years and my sister Bobbie recently completed her master’s degree and is just two or three classes shy of getting her principal’s certification.”

“Brianna, Joaquin, your father loved you dearly, and we know you will continue to make him and all of us proud,” De Leon added. “Bobbie, if Joey were here right now, he’d say it’s going to be okay.”

Corporal Hiram Flores, Officer Tomas Garces and Officer Javier Lara from the Mission Police Department (also known as the “Smoking Mafia” when they got together to barbecue) spoke as close friends and colleagues of Espericueta. Lara also noted that Bobbie asked them not to be too serious with their sharing, so he made sure of that.

Lara told a story about when Espericueta passed his test to become corporal and their reaction to the news, joking that they were considered “junior corporals” thanks to Espericueta’s new position.

“We talked to Speedy and we told him ‘bro, congratulations dude. We feel the power already,’” Lara said. “And he goes ‘dude,’ in other terms, ‘this isn’t the mob bro, I’m not getting made. You do not have corporal powers.’ We were like ‘whatever man. Yeah we do.’ I tried to ask him to write somebody up, but he didn’t follow through.”

Lara said that a week before the funeral, Espericueta had texted their group that if something happened to one of them, they all had to be there for the family. He ended their speech by making promises to Joaquin, Brianna and Bobbie to be there for them always.

“Every step of the way, we’re going to be there,” Lara said to the family. “The one thing I need you to remember is that you are loved and cared for. You may have lost Joey the other day, but you gained a whole police department.”

Mission Police Chief Robert Dominguez along with the Mission PD Honor Guard led the police memorial service for Espericueta, folding up a flag in his honor before presenting it to his wife.

“I have always told everyone that I have two children at home and 206 at work,” Dominguez said. “Speedy was a great son, and I will miss him dearly. When God created him, he blended in the right mixture of humility and compassion. These qualities molded him into a true public servant.”

In closing, Pastor Jobe prayed over all the officers in attendance and their families.

“We give thanks for men and women who have dedicated their lives for the betterment of the city in which we live and live around,” Jobe said. “We pray a blessing on their lives and their families.”