An off-duty sheriff’s deputy harassed and insulted Palmhurst police when they arrested him on a felony assault charge last month, according to court records.

Officers arrested Roberto “Bobby” Rivera, 42, of Palmhurst on June 15, when they responded to a call about an “unwanted male subject at a female’s residence, who was intoxicated and was possibly armed,” according to court records. Rivera, who had been drinking, dared the officers to arrest him and called one a “dumbass.” 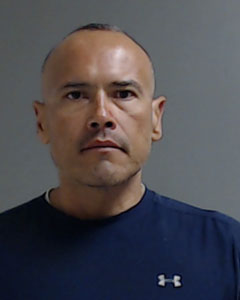 Police charged Rivera, a deputy assigned to the Criminal Investigations Division of the Hidalgo County Sheriff’s Office, with assault on a peace officer, a second-degree felony.

“I want to apologize to the Palmhurst Police Department, the HCSO and to my family and my girlfriend for my behavior that day,” Rivera said in a statement released by his attorney, Artemio De La Fuente of Edinburg. “It is uncharacteristic of me to conduct myself the way I did that evening. I spoke in an unprofessional tone to the responding officers and for that I am deeply sorry.”

Rivera, however, denied that he assaulted a police officer.

“As far as the charge against me, I assaulted nobody and I trust the legal system will run its course and justice will prevail,” Rivera said in the statement.

The Sheriff’s Office placed Rivera on paid administrative leave after the arrest. With an internal investigation pending, Chief Deputy Mario Lopez said he couldn’t comment on the incident.

After stints working for an ambulance company, the Texas Department of Criminal Justice and the McAllen school district, Rivera joined the Harlingen Police Department in October 1999.

Then-police Chief Michael Blake terminated Rivera in October 2000 for “unsatisfactory” performance, according to personnel records. The Port Isabel Police Department, where he accepted a job two years later, determined the termination resulted from “internal political problems at the department.”

On his job application, Rivera disclosed that he had been charged with driving while intoxicated in 2003.

“On 01-29-03, I was a passenger in a motor vehicle involved in an accident in Edinburg, TX,” Rivera wrote. “The driver fled and I was arrested. Charges were dismissed and the subsequent arrest is in the process of expungement.”

A handwritten note on the job application reads: “He initially lied.”

“I resigned from my position because I was going to be terminated,” Rivera wrote in April 2013, when he asked the Sheriff’s Office to take him back.

Why TABC planned to terminate Rivera is unclear. The agency didn’t keep a copy of Rivera’s personnel file.

Rivera worked his way back to investigator at the Sheriff’s Office, which assigned him to the fraud unit of the Criminal Investigations Division in October 2018.

Palmhurst police encountered Rivera on the night of June 15, when they responded to a call about an unwanted male subject.

Rivera, who had been drinking, took a Lyft to his girlfriend’s home in Palmhurst, according to court records. He admitted to drinking four beers.

She asked Rivera to leave. He refused.

“Officer Martinez began asking Mr. Rivera questions to which he replied by telling officers he had more ‘experience’ than anyone else in the room and proceeded to call Officers ‘rookies,’” according to court records.

Officers warned Rivera that he could be charged with trespassing. Rivera dared them to arrest him.

Rivera apparently hadn’t been driving that night, but his girlfriend said “she has seen Mr. Rivera show up intoxicated while driving his patrol unit,” according to court records. He disputed that.

“The allegations of me driving my patrol unit while being intoxicated are completely untrue,” Rivera said in the statement. “I strongly deny ever being behind the wheel of any motor vehicle while being impaired.”

Police also said that Rivera pushed an officer during the incident. As a result, police charged him with assault on a peace officer, a second-degree felony.

That charge may not stick. Video from the incident doesn’t clearly show what happened.

With the case pending, the Palmhurst Police Department declined to release a copy of the video and requested a decision from the Texas Attorney General’s Office.

Rivera complained about chest pains after the arrest. Officers took him to Doctor’s Hospital at Renaissance, but Rivera refused treatment.

Police took Rivera back to Palmhurst, where they booked him on the assault charge. Officers also allowed Rivera to make a phone call.

“During the phone call, Mr. Rivera who was apparently speaking to his mother advised her to make calls for ‘a big favor’ referencing Edinburg Mayor Richard Molina and several other subjects who can help him,” according to court records. “Mr. Rivera further stated via his phone call that his charge for assault on a public servant is probably a big deal for a small town like this (Palmhurst).”