Amid U.S. Vice President Mike Pence’s visit to the Valley last week, a local non-profit participated in a nationwide vigil protesting the inhumane conditions they say many undocumented immigrants in holding facilities are encountering.

La Union del Pueblo-Entero-LUPE-organized the McAllen location of “Lights for Liberty: Luces para la Libertad Friday, July 12 outside the “Ursula” detention center in McAllen. It is the local Border Patrol processing center and the largest U.S. Customs and Border Protection detention center for undocumented immigrants according to the U.S. Department of Homeland Security. 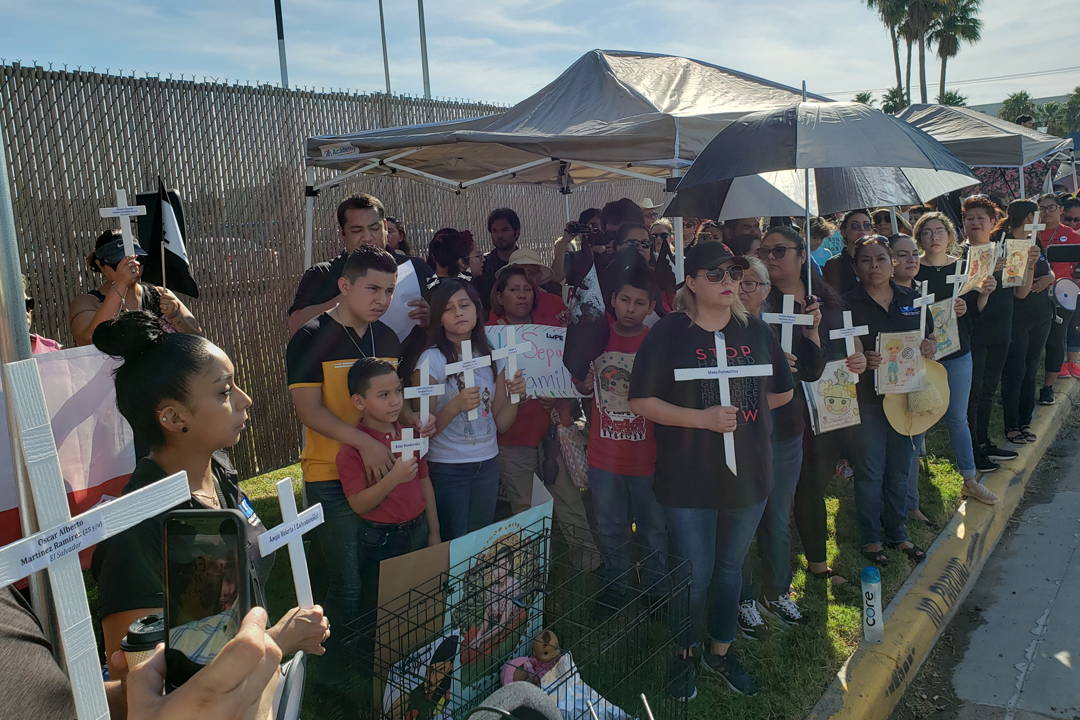 The facility-a warehouse that can hold more than 1,000 people, gained notoriety last year after it was reported that children there were being kept in cages.

Dozens of protestors lined up outside the facility, holding either crosses bearing the names of the 12 children who have died in custody at detention centers since last year, or drawings made by children at the Sacred Heart Respite Center.

“It’s a vigil for all the kids who have died at their hands,” Blanca Muñoz, a member of LUPE said of the current administration. “It’s not fair or right and we want more people to understand that these people are humans, not strangers because of their skin color or because they speak another language. In God’s eyes we are all the same. They come here with a dream of an American dream everyone talks about. Now they’re being separated for wanting to escape their homes.”

Pence’s visit
Pence toured the McAllen facility and the Donna processing facility that same day. An organizer with LUPE stressed that the vigil was planned prior to the announcement of Pence’s visit.

According to the White House press pool that visited the facility with the vice president, the McAllen facility was described as “overcrowded” with a “horrendous stench, a news release said.

“The cages were so crowded that it was not possible for all the men to lie down at the same time, the pool reporter said. “There were no mats or pillows — some of the men were sleeping on concrete.”

At a press conference following the tour, Pence called for additional beds in Immigration and Customs Enforcement jails and said the situation was the reason he had called for more funding for the Department of Homeland Security.

“I was not surprised by what I saw,” Pence said. “I knew we’d see a system that was overwhelmed.”

Those conditions are similar to the ones described by Elias, 13, a migrant from El Salvador who spoke at the protest alongside his lawyer, Eugenio “Gene” Delgado.

Elias, whose last name wasn’t provided, stayed at a different detention facility and was split up from his little brother-Abraham, 8- for three weeks, he said.

“My brother was left with an uncle but I was alone,” Elias said. “I didn’t have anyone to talk to. It was cold, I had to sleep on the floor and the food wasn’t properly cooked. It looked expired and I felt bad after I ate the food. I thought I’d stay there forever.”

Elias was at the vigil with his brother and Dayra, a 10-year-old from Mexico who also stayed at a processing facility. The three were accompanied by Delgado.

“Last June the nation was shocked to learn about Ursula, the largest detention center for undocumented immigrants in the US. which was the epicenter for the family separation crisis where children were kept in cages without access to simple toiletries and showers,” Delgado said. “Sadly today, a year later, it’s only gotten worse.”

“Earlier this summer it was reported that the conditions in Ursula could be compared to torture facilities with extremely cold temperatures, lights on 24 hours a day, no adequate access to medical care or basic sanitation, water or adequate food. This is not what our community or nation is about.”

Delgado, who also represents LUPE, said he will continue to work for more people like Elias, Abraham and Dayra until they are released from detention centers and continue to thrive.

“Look at them, these kids are not criminals and should not be treated like criminals,” Delgado said of the children.

Tania Sanchez, a strategist at LUPE, said the local community should continue to protest these immigration practices, even without a politician touring the area.

“People just come for the photo op, we are the ones who are always here standing against the atrocities this administration is doing against the people,” she said.