The exhibit, features three 8-foot scaled models of the American Space Race rockets used by NASA during the 1960s to advance the space race before that fateful moon landing on Sunday, July 20, 1969. 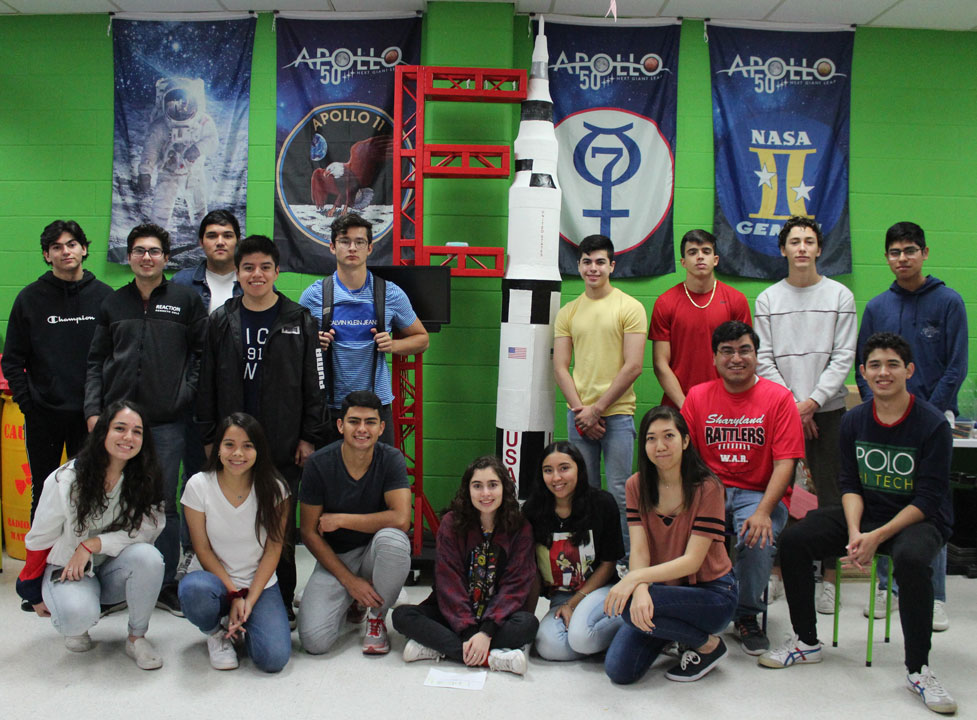 “It’s especially important for people to continue to learn about this even 50 years later because now our area is involved in the new space race because of SpaceX in Brownsville,” said Robert Barbosa, head of the social studies department at Sharyland High School. “There’s so much buzz with our space race against China and India.”

The earliest of the three rockets on display is the Mercury-Redstone, which was used by the United States for Project Mercury to put the first Americans in space. The second rocket is the Titan-II, a repurposed Intercontinental Ballistic Missile which was used in Project Gemini to test the logistical operations needed to travel to the Moon. The final rocket is the Saturn V, of the Apollo Program, which through its five stages allowed Americans to land on the Moon.

The exhibit models were created by students taking Barbosa’s Topics in Social Studies class as a semester-long learning project, Barbosa said. Students used a wood and cardboard framework, along with papier-mâché to create a scaled model of the rockets, which are displayed alongside a video display created by students that showcases the history of the space race between the United States and the Soviet Union.

“We looked at this project as a STEM component, a cross curricular lesson where they learn about the history of the space race, and incorporate different subjects like math and computer science,” Barbosa said. “It shows how the Cold War impacted technology. Today, it’s difficult to imagine NASA doing something like this even though they’re getting much more money compared to how much they received in the 60s. Maybe once our competitors in China and India start to successfully launch people into space, we’ll start revamping efforts to further our space exploration. Maybe even jumping to Mars to be pioneers there.”

The exhibit is currently on display at the Mission Historical Museum through September. The museum, located at 900 Doherty Ave., is open Tuesday through Friday from 10 am to 5 pm and from 10 am to 2 pm on Saturdays.