For one night, teens who’d otherwise feel like outcasts in high school had the spotlight shining on them.

That’s according to Melanie Watson, president of the local non-profit Capable Kids Foundation, which hosted a prom night for special needs individuals in the upper Valley last week. 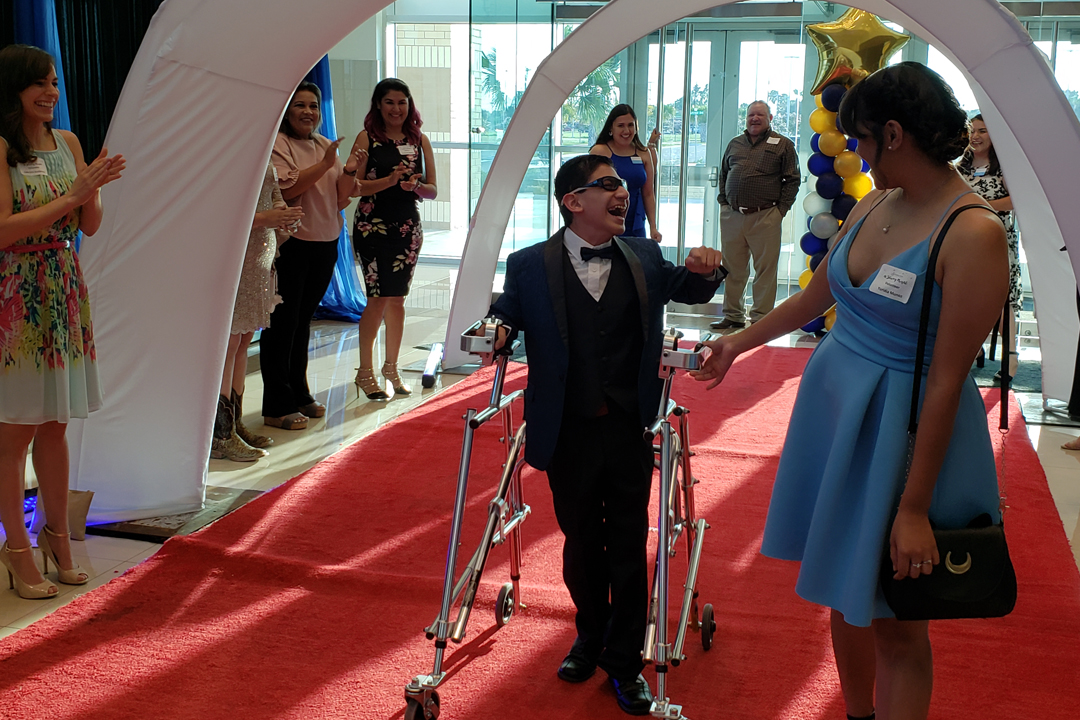 Held Saturday, July 13 at the Mission Event Center, the Capable Kids Prom featured 125 students with special needs dancing the night away. The theme of the night was “A Starry Night.&rdquo;

“We just want to allow them to have a night to shine,&rdquo; Watson said of the attendees. “They can be themselves and we can show them that they can make connections with other people and have a great time.&rdquo;

The Capable Kids Foundation-which has locations in McAllen and Port Isabel-works to improve the quality of life of those with disabilities with experiences that help them enjoy life and make sure parents feel equipped to handle any issues that come their way, Watson said.

Half of the kids at Capable Kids are diagnosed with autism while the rest have down syndrome or a range of developmental delay disorders such as muscular dystrophy and spina bifida, Watson said.

“Children have opportunities to make friends, experience fun and joy in their lives,&rdquo; Watson added. “It&rsquo;s important for these kids to attend the prom for self-esteem reasons. They&rsquo;re being accepted as they are, you can see the joy in their faces on the dance floor.&rdquo;

At the prom, attendees were greeted with a red carpet lined up with volunteers who-depending on their sensory vulnerabilities-clapped and cheered or waved at them to make them feel like a celebrity. Kids received corsages after leaving the red carpet where they were led to a hair and makeup touch up corner if they needed it before going to the ballroom.

At the ballroom, Watson said extra care was used to make sure all kids were accommodated. This included providing pizza and tamales for lunch-as the latter food option is allergy friendly-and kids were given a complimentary prom portrait with their plus one-a volunteer from the organization or a friend.

At the dance floor, the music was played at low volume and the organization ditched strobe lights to help the kids feel calm in this setting. A quiet area was even opened to allow the teens to decompress after a while.

“We have kids who for some reason or another they didn&rsquo;t want to go to prom at their school,&rdquo; Watson explained. “They felt bullied or were scared of the loud music and strobe lights which could affect our kids with epilepsy. So when they come to our prom they are exposed to [a prom setting] in a friendly area.&rdquo;

Among the attendees was 14-year-old Omar Teran from Harlingen, who has been a member of Capable Kids Foundation&rsquo;s cheer squad for the last four years and attended the lower Valley prom earlier this year.

“Before I was very shy, then decided to push myself to make friends which I&rsquo;ve done because of Capable Kids,&rdquo; Teran said. I&rsquo;ve gained confidence here. Having autism makes it hard to make friends but this prepares you for a more social setting like high school. I feel like if I can do this, I&rsquo;ll be OK once I start high school.&rdquo;

Omar&rsquo;s mother, Maya, praised Capable Kids for their prom night and the work they&rsquo;ve been doing to help her son feel more comfortable with himself. She said she became involved in the organization after Omar expressed an interest in becoming a cheerleader but his school didn&rsquo;t allow him to join the team after finding out about his disability and feared he&rsquo;d be a liability.

“But then we heard about Capable Kids looking for cheerleaders and they were so accepting of him,&rdquo; Maya said. “Omar usually gets nervous around big groups but is gaining more socialization and interactions with people. He doesn&rsquo;t spend his days at home, he&rsquo;s exploring new things everyday because of Capable Kids. It makes my heart melt seeing him like this.&rdquo;