Wearing layers of clothing and carrying nothing that would make a journey into the U.S. more strenuous, waves of undocumented people and children coming from south of the border are arriving at the respite center in McAllen daily.

Last Friday, U.S. Congressman Henry Cuellar (TX-28) held a press conference at the Catholic Charities Humanitarian Respite Center in McAllen. As the press entered the center, the conversations of volunteers and those seeking asylum in the United States were buzzing. 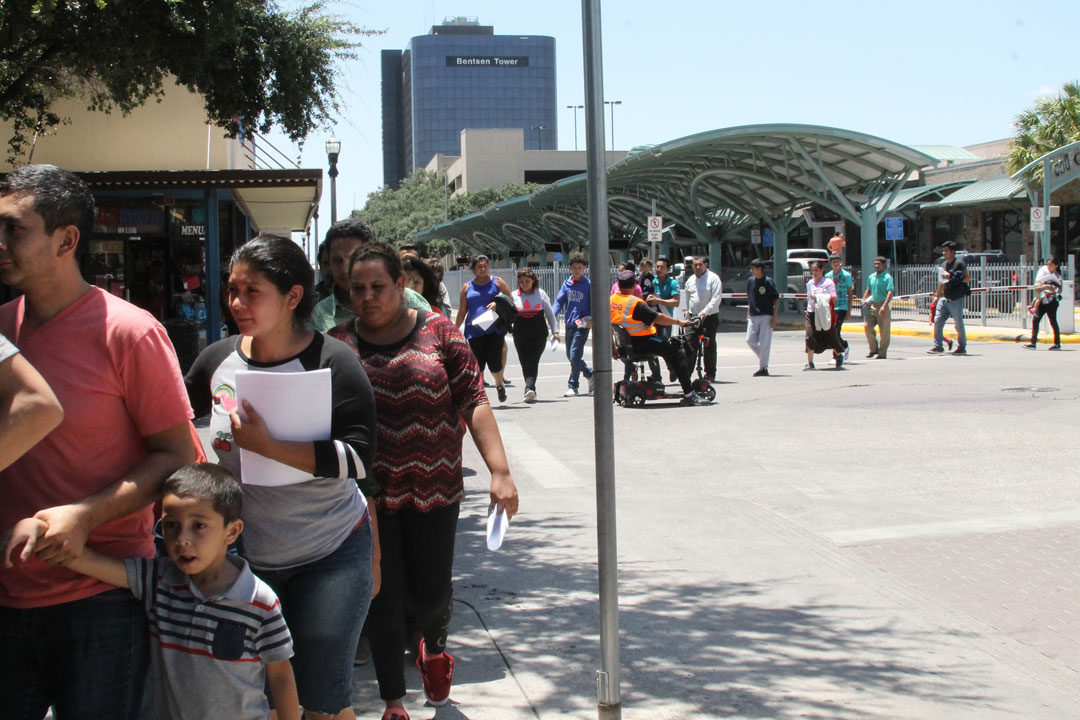 The funds for this endeavor were secured by Cuellar after the passing of the FY19 Emergency Supplemental Appropriations bill that was signed into law earlier this summer.

The deadline to determine how these funds will be distributed has yet to be determined. Cuellar said that he does not feel that the lawmakers will meet the 30-day deadline to disperse funds, but stressed that he was working to ensure that the majority of the $30 million allocated would go to the Rio Grande Valley.

“I think once they&rsquo;ve worked that process out, it&rsquo;s going to work a lot better,&rdquo; Cuellar said. “I assume there will be some processes to be addressed, some unmet needs. As we finish this emergency bill that provides money until Sept. 30, 2019, as we&rsquo;re working on the regular appropriation bill, my intent is to put in an additional $60 million, and we might have to tweak the language.&rdquo;

According to Cuellar, the RGV began to experience an influx of migrants in 2014, and the local non-profit organizations and communities have been shouldering the costs. In McAllen alone, where the respite center is located, over $1 million has been spent this year on the required lodging, meals and medical assistance for the migrants who have been released from federal custody.

“In the last five years, I think the state of Texas has received over $100 million, and the only thing that was reimbursed was $400,000 to the McAllen area,&rdquo; Cuellar said. “So this January I said ‘we gotta change the delivery model.&rdquo;

The new delivery model involves setting up a new fund and bypassing the state of Texas.

“Originally we had $60 million but we&rsquo;ll work with $30 million,&rdquo; Cuellar said. “Now the set up that we have is the local communities will now go to the United Way board, file the application, that will go up to the FEMA [Federal Emergency Management Agency] emergency board and then that money will go directly [to the community&rsquo;s reimbursements], bypassing the state.&rdquo;

The Catholic Charities Humanitarian Respite Center, along with several RGV organizations, have been providing humanitarian relief to the thousands of migrants being dropped off by U.S. Customs and Border Patrol and Immigration Customs Enforcement (ICE) at bus stations, shelters and churches in the area. Cuellar said he wanted to ensure that communities were compensated for their response to an issue “that should be shouldered by federal agencies.&rdquo;

“I asked them to make sure that they put the emphasis here, especially in the Rio Grande Valley, because this where most of the work is being done,&rdquo; Cuellar said. “
Expenses of the influx include food, water, hygiene products, medicine, medical supplies, temporary housing and transportation. Cuellar said that members of the FEMA board are in the process of deciding how the $30 million will be divided.

“We&rsquo;ve done this before, and we&rsquo;re hoping this will be done quickly,&rdquo; Cuellar said. “I asked them when the application process will be open, and they said ‘as soon as possible.&rsquo;&rdquo;

Cuellar recommended that non-profit organizations, NGOs and those who need to be reimbursed save receipts from Jan. 1, 2019 to now in order to be ready to apply when FEMA opens the application process.

“The emphasis will be food and shelter,&rdquo; Cuellar said. “If there&rsquo;s some medical needs, then we&rsquo;ll come back with the regular appropriation process and add that money.&rdquo;
Ana Garcia, the South Texas Regional Director for Senator John Cornyn, said that securing the funds for the area was a bipartisan effort.

“The most important thing today is to thank everybody here who are doing God&rsquo;s work to help our migrant families and children,&rdquo; Garcia said. “This money is intended for our communities, it&rsquo;s intended for our non-profit organizations who are working tirelessly day in and day out. Senator Cornyn and Congressman Cuellar wanted to ensure that they receive the money that they deserve.&rdquo;