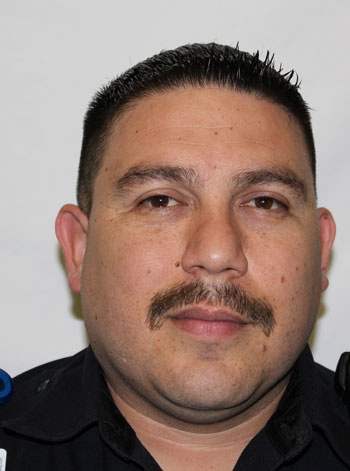 “This should have never happened,” De la Cruz said. “I knew better.”

After striking a deal with prosecutors, he pleaded guilty to conspiracy to possess with intent to distribute more than 1,000 kilograms of marijuana.

“You committed this crime while wearing a uniform and a badge — and that is reprehensible,” Rainey said. “I hope that my sentence will adequately and appropriately address what you did.”

When it became apparent he would receive a significant prison sentence, De la Cruz turned red and appeared stricken. Members of his family, who packed the gallery, started crying.

Federal judges typically follow guidelines published by the U.S. Sentencing Commission, which suggests a range of punishment based on the offense level. A report prepared by federal probation officers is a key part of the process.

The amount of marijuana involved left De la Cruz with a staggeringly high offense level. He also received enhancements for abusing a position of public trust, carrying a weapon, holding a supervisory role within the drug trafficking organization and using threats or violence.

While he accepted responsibility by pleading guilty, the guidelines still recommended that De la Cruz serve 235 to 293 months in prison.

Rainey knocked the sentence down to 168 months, noting that De la Cruz waived his right to appeal and had a minor supervisory role within the organization.

She blasted De la Cruz during a heated back-and-forth with Guerrero.

Ramon “Ramey” De la Cruz Jr. — the son of former Starr County Justice of the Peace Ramon De la Cruz Sr. — joined the Starr County Sheriff’s Office in 1999, according to personnel records. He resigned in October 2014 to join the Rio Grande City Police Department, where he became a detective.

With help from his brothers, Ramiro Beltran Sr. managed a drug trafficking organization that smuggled marijuana from the family ranch in Starr County to Dallas, Houston and Baton Rouge, Louisiana.

The Beltrans transported marijuana for the Gulf Cartel and the Zetas, according to court records.

After they smuggled marijuana across the Rio Grande, the Beltrans stored the bundles in hidden bunkers. They transferred the marijuana to horse trailers with hidden compartments, which regularly crossed through U.S. Border Patrol checkpoints.

Homeland Security Investigations, a division of U.S. Immigration and Customs Enforcement, estimated the Beltrans transported 60,000 pounds of marijuana from 2007 to 2013, according to court records.

In addition to transporting marijuana, the Beltrans wanted to steal marijuana and drug money from the cartels. To avoid suspicion, they needed help.

Rodolfo Beltran, who described himself as the family’s banker, said De la Cruz provided them with fake police reports.

Several members of the Beltran family testified Wednesday that fake documents provided by De la Cruz helped them steal money from the Zetas.

Ramiro Beltran knew a woman who transported money for the Zetas, according to courtroom testimony. De la Cruz prepared a fake police report, which showed the cash had been seized by law enforcement.

Asked about the discrepancy, Rosbel Beltran said he counted the money himself and remembered the amounts.

Pena said he provided security for two or three drug shipments. In exchange, De la Cruz provided him with cash.

Homeland Security Investigations arrested Pena in 2015 after conducting a sting operation. He pleaded guilty and received a seven-year sentence.

The criminal complaint against De la Cruz identified Pena as “CS 12,” an acronym for confidential source.

After he provided the information, Pena received a reduced sentence, according to U.S. Bureau of Prisons records. All records from the resentencing hearing remain sealed.

Witnesses who testified Wednesday said De la Cruz also helped the Beltrans cover up a kidnapping and murder committed by the Gulf Cartel.

In 2011, someone had stolen a large amount of cocaine from a stash house in Alton, according to court records. The Gulf Cartel dispatched a kidnapping team to find the people responsible.

They abducted the wrong man. The kidnapping team, concerned the man could identify them, took him to Mexico anyway. He was never heard from again.

After the kidnapping, a Gulf Cartel plaza boss asked the Beltrans to cover up the crime.

The Beltrans buried weapons and tactical vests used by the kidnappers on their ranch. When they heard the full story, the Beltrans became nervous and asked De la Cruz to dispose of the weapons.

A man named Roel Garza, who participated in the kidnapping, and Rodolfo Beltran testified that De la Cruz took the guns.

Along with cash, the Beltrans thanked De la Cruz by providing him with gifts.

“Why would a drug trafficker buy a racehorse for a cop?” asked Booth, the federal prosecutor.