Three big letters adorn the back of the practice shirts worn by the players of Sharyland Pioneer as they opened their 2019 season this past Monday morning. 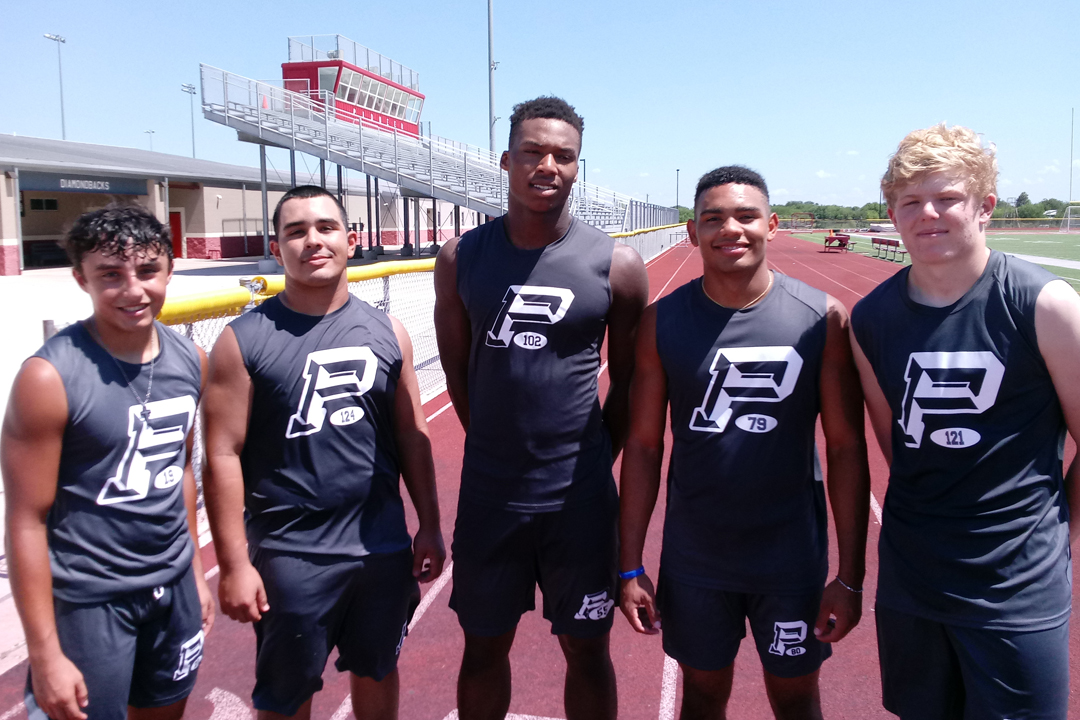 A look back to last year might best explain the phrase.

“That playoff loss left a lot of these kids with a bad taste in their mouths, “said Lee, “and we are hoping that carries us into our season (this year)”.

Whether or not the experiences of last year will play a role this year is too early to determine but one thing is certain as the Diamondbacks took the field Monday . . . a lot of last year’s team is back for 2019. Pioneer returns seven starters for this year on both offense and defense. Many of them return having earned honors from last year too.

On defense, Ryan Bulthuis (Jr.) was a unanimous selection to the All – District first team as a safety. Corner Marco Oviedo (Jr.) made the second team as did defensive tackle Erik Torres (Sr.). Senior safety Chis’mere Mallard was a District 30-6A second team selection who joins the team as a transfer from McAllen High.

Garcia says the team is ready to make amends for last year. “We’re hungry. We want a district championship. We want to win the first round; we want to go deep (in the playoffs).

The sixth year program has never advanced past the first round of the playoffs in their previous three trips and Garcia added that was something he and the other seniors on the team hoped to be the first to do.

Lee thinks he has the team to do that and more.

“That’s (a playoff victory) a small goal for us,” said Lee. “We want to win more than one playoff game. We feel we have a good enough team to make a good run if we stay healthy.”

The Diamondbacks should benefit with the return of Marburger. The junior saw plenty of time on the field last year despite playing behind 2018 district MVP Jacob Rosales. Rosales graduated and Marburger is ready for the role.

“It’s very humbling,” said Marburger. “I think it (last year) will carry over well. I’m more prepared. I feel very confident with the team we have.”

Lee spoke very highly of his quarterback. “He (Marburger) threw for about 1,100 yards and ran for about 300 yards last year. He played in eight of our eleven games. He even played corner one game. He won’t feel the pressure a brand new quarterback might feel. It’s really going to benefit us.”

A number of other players talked about how having so many familiar faces around to start the season would also be a plus.

Bulthuis echoed Lindo’s feelings. ”That year of experience makes things easier. You know what is coming. You see things and can read them quicker.”

Even Mallard, a newcomer to the program, sensed the environment as he adjusted to his new teammates. “You see their chemistry,” he said. “It helps a lot.”

Diamondbacks fans won’t have to wait long to see how this year’s squad stacks up. Pioneer will host a scrimmage against PSJA Memorial next Friday, August 16 and another against Mission Veterans on Friday, August 23. Both scrimmages are scheduled for 7 pm starts at Pioneer High School.

Overall the Diamondbacks play four non-district games to get ready for their first district game. Pioneer went 2-2 in those games last year against some good teams, (Harlingen, Juarez-Lincoln, Mission, Brownsville Rivera) and Lee stressed their importance.

“We feel each (non-district) opponent will give us something a little different that will help us going into district,” he said. “We want to win those games but our main goal is to get our kids prepared and get a lot of them the opportunity to play. That is going to benefit us going into district.”