Thanks to several organizations and law enforcement entities throughout western Hidalgo County, this week students of all ages had access to free school supplies, haircuts and shoes before the start of the new school year.

Three events – the Mission Crime Stoppers National Night Out, the city of Alton’s National Night Out and a giveaway from the Buckner Family Hope Center – took place over the last week. Their goal: to create a connection between local officials and residents, provide free events the entire family could enjoy and give back to less fortunate members of the community. 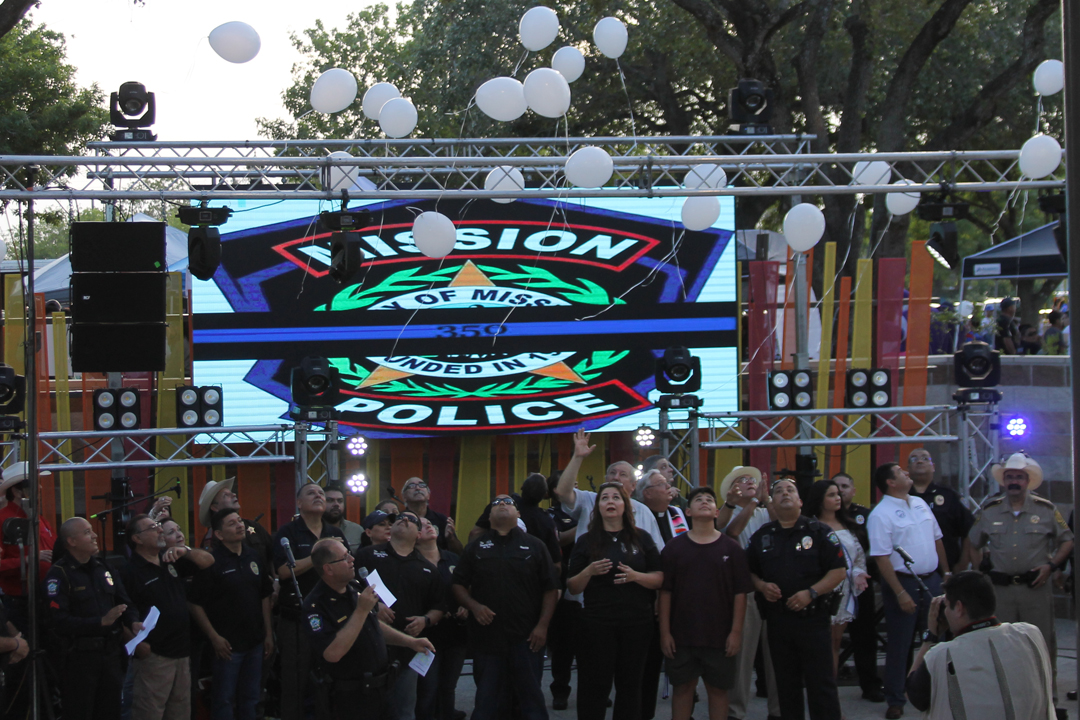 Hundreds of people from across Hidalgo County gathered at Leo Pe&ntilde;a Placita Park in Mission for the city&rsquo;s annual National Night Out event.

Featuring live entertainment from Missionites, carnival rides and moon jumps for children, food sold by local vendors, informational booths and Elida Reyna y Avante, National Night Out is organized by the Mission Crime Stoppers and city officials. The yearly celebration encourages residents and families to create connections with law enforcement officials and officers throughout the country.

Mission Crime Stoppers Coordinator Corporal Robert Rodriguez said their overarching goal is to destigmatize the uniform and presence of a police officer in the community.

“We&rsquo;re here to help the public, to provide a service and to keep them safe,&rdquo; Rodriguez said. “We want them to call us, to not be afraid to use us – because that&rsquo;s what we&rsquo;re here for.&rdquo;

Funding for National Night Out comes from a few fundraising events put on by the Mission Crime Stoppers every year.

Students from schools throughout the area received school supplies purchased by these funds, and walked away with new backpacks. Other kids had the opportunity to receive free haircuts, which were also available during National Night Out in Mission.

Law enforcement entities from across the Rio Grande Valley were there to support those who put their lives on the line for the community every day, Mayor Armando O&rsquo;ca&ntilde;a said.

Mission police Chief Robert Dominguez said that in the last year, Mission has experienced a 20 percent decrease of crime in the community. He thanked residents for being the department&rsquo;s eyes and ears throughout the year, and said it was because of them that Mission earned the All-America City Award earlier this year.

“We care about our community, and we&rsquo;re here to support you: our residents,&rdquo; Dominguez said. “That&rsquo;s the most important part of today: the cooperation we have. Those 9-11 calls that we get when you see something suspicious in your neighborhood – you have no idea how those calls help us.&rdquo;

A tribute was held during National Night Out for fallen Police Corporal Jose “Speedy&rdquo; Espericueta, Jr. who was killed in the line of duty June 20, 2019. The 13-year Mission PD veteran&rsquo;s family was present on stage with city of Mission officials and police officers, and after a moment of silence white balloons were released into the air in his honor.

“It was a devastating loss for our community, for our organization,&rdquo; Dominguez said. “We&rsquo;ll never forget him.&rdquo;

Officials also asked for a moment of silence for the victims of two recent mass shootings in El Paso, TX and Dayton, Ohio, which took the lives of 22 and 9 people, respectively.

National Night Out, a nationwide event that promotes relationships between communities and law enforcement officers that protect them, was celebrated in many Valley cities on Tuesday, including in Alton. 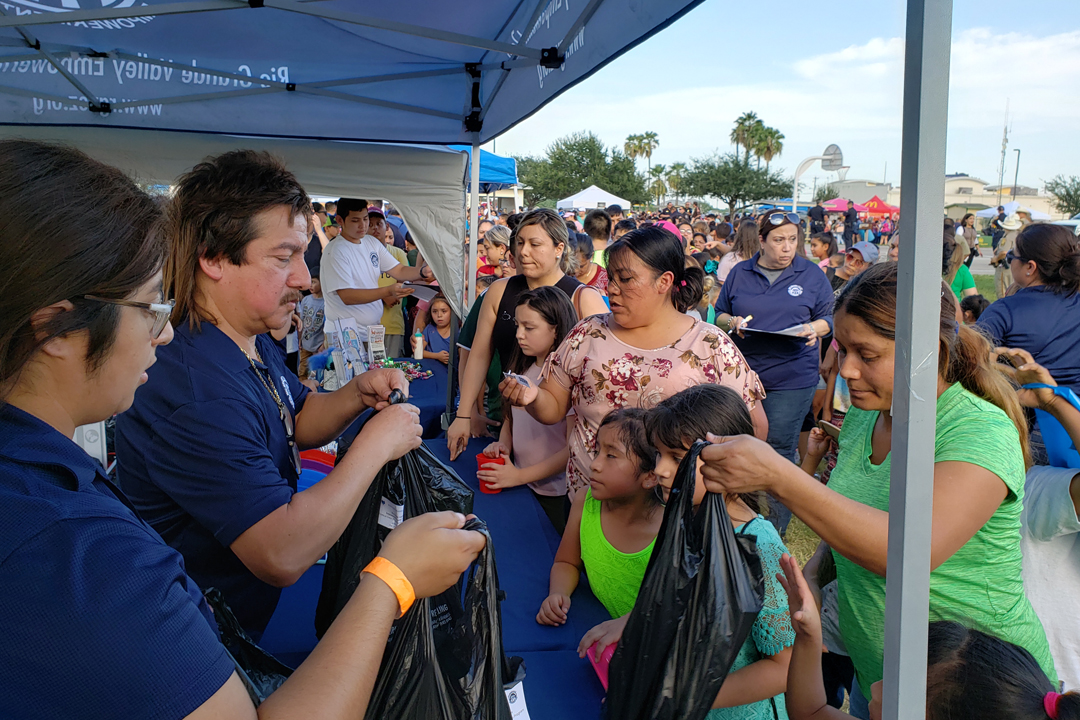 The event celebrates the community and gives attendees the chance to meet the local law enforcement officers sworn to protect them.

“We are partners in keeping the community of Alton safe,&rdquo; Alton police Chief Jonathon B. Flores said. “When we work together, we accomplish much more. It&rsquo;s through this that we can continue to keep Alton safe.&rdquo;

As part of the event, food and live music were provided to attendees as well as dozens of businesses and organizations such as the Progress Times newspaper, city of Palmhurst, Precinct 3, Mission school district and the RGV Empowerment Zone were on hand to distribute free school supplies for families.

The supplies included backpacks, notebooks and pencils. Most vendors finished distributing items within an hour.

Law enforcement agencies such as the Hidalgo County Sheriff’s Office, U.S. Customs and Border Protection, Texas Department of Public Safety and first responders from the city of Palmview joined the city of Alton&rsquo;s police department at the event.

“We&rsquo;re trying to get the kids and the community ready to go back to school while getting them familiar with the faces of the police department and law enforcement agencies so they have a friendly and familiar face they can talk to if they need to,&rdquo; Underwood said. “While we&rsquo;re getting the community together to have a good time, people can meet these law enforcement officials and feel more comfortable in knowing who to go to for help.&rdquo;

The free back to school supplies are a relief to many families including Sandra Sustaita. She attended the event with her four children who attend Kika de la Garza Elementary School.

“Otherwise I would&rsquo;ve had to buy things for my kids a few items at a time because I wouldn&rsquo;t be able to afford anything else,&rdquo; Sustaita said. “It&rsquo;s very helpful to families and the fact that you&rsquo;re meeting all these officers is kind of a relief. You know who is protecting you and can feel safe.&rdquo;

Alton police Chief Flores said that the success of National Night Out will ultimately be determined by the kind of relationship the community has with its law enforcement officers, and vice versa.

“When we work together, we accomplish more in keeping the community safe,&rdquo; Flores said. “Tonight is about our community going about and saying we&rsquo;ll be unified and continue to have peaceful events and won&rsquo;t be deterred from doing that.&rdquo;

For a family struggling financially, the gift of a backpack, school supplies and new shoes is a huge relief considering the average American family plans to spend $696.70 on back to school shopping this year, according to a survey conducted by the National Retail Federation.

Additional back to school costs typically include health check-ups, immunization and haircuts.

“School starts on the 26th of August here in Pe&ntilde;itas and the La Joya Independent School District, and in order to help families who may be struggling financially, our community has come together to provide 800 children with new backpacks, school supplies and shoes,&rdquo; said Diego Silva, director of the Buckner Family Hope Center at Pe&ntilde;itas.

“We are extremely thankful for our community partners coming out today to help provide families with more information about their services related to health and finance, which they can also access at the Buckner Family Hope Center,&rdquo; said Silva.

The shoes were provided by Buckner Shoes for Orphan Souls, the largest humanitarian aid project of Buckner International and distributed to students. Families attending also had the opportunity to learn more about Buckner Children and Family Services&rsquo; available programs and services in the Rio Grande Valley, including STARS, the Business Entrepreneurship Incubator class for small businesses, economic strengthening classes, ESL and GED classes and access to Buckner Family Coaches.

“This event serves as an engagement opportunity, as we see not just the 800 children but about a total of 1,200 people including the parents,&rdquo; added Silva. “Usually about 50% of those registered for our backpack distributions are new to Buckner, so we are able to introduce them to all of our available programs and services in place to help strengthen families.&rdquo;