A volunteer with the Mission Police Department since 2002, Jim Mantz was honored recently thanks to the efforts of Girl Scout Troop 1065.

This Mon. Aug. 5, 2019, Mantz was presented with the Presidential Service Award after being nominated by the Greater Girl Scouts of Greater South Texas Mission Service Unit Troop 1065. Troop 1065, which specializes in community service, heard about Mantz from news coverage earlier this year. 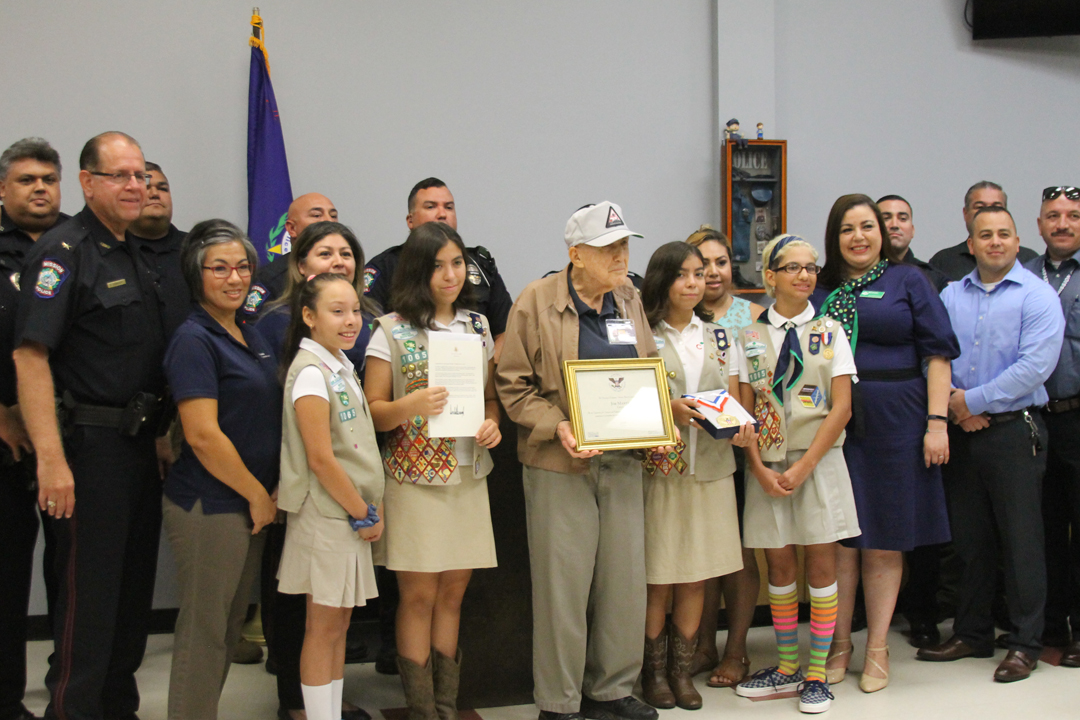 Members of Troop 1065 approached their scout leader Molly Mejia and asked her if they could honor 87-year-old Mantz in some way in order to thank him for his continued public service in the community.

“Our girls decided a long time ago that they wanted to focus their scouting on service,&rdquo; Molly Mejia said. “This is the perfect opportunity to honor a member of our community who is being selfless and is doing it not for the recognition, but to do something, to keep busy, to give back.&rdquo;

The Presidential Service Award was given through Points of Light, which is the largest organization dedicated to volunteer service in the world and was inspired by the events of 9/11. Molly Mejia said that each of the scouts in the troop have received the award for their own acts of service, and once they were familiar with the honor they wanted to pass it on to Mantz.

The Presidential Service Award includes a Certificate of Service, a Presidential Medal and a letter signed by the president personally thanking Mantz for his service.

Mantz said that when he moved to the area, he knew he
couldn&rsquo;t “just sit around and watch TV.&rdquo;

“I certainly appreciate the honor,&rdquo; Mantz said. “I&rsquo;ve spent a lot of time working here at the police department, trying to do the very best wherever they need me.&rdquo;

Prior to his retirement and move to Mission, Mantz worked for the Department of Defense. He currently volunteers with the city&rsquo;s criminal investigations bureau and when he doesn&rsquo;t drive to the station for this daily duties, he can be found walking there.

“I hope to continue for a few more years before I&rsquo;m unable to physically function,&rdquo; Mantz said.

Girl Scout Lola Mejia spoke before the troop presented Mantz with the Presidential Service Award, and noted that Mantz is a great role model for young people in the community.

“A lot of people don&rsquo;t do service work any more, and it&rsquo;s a really good thing to do,&rdquo; Lola Mejia said. “Our Troop is mostly centered around service work and we do it whenever we can: we help with the police, firefighters, animal shelters, the food bank, our church, anything we can do, so we thought this [Mantz&rsquo;s volunteerism] was a good thing.&rdquo;

Lola Mejia said the Presidential Service Award (Gold) can be earned by someone who dedicates at least 100 hours of service toward the community. Troop 1065 presented Mantz with the award as a way of honoring his time and commitment to the area.

Police Chief Robert Dominguez said that Mantz is one of the most dedicated volunteers to arrive at the Mission Police Department.

“It&rsquo;s a great day,&rdquo; Dominguez said. “He&rsquo;s been a great asset to us at the Mission Police Department for a number of years.&rdquo;

Dominguez added that Mantz&rsquo;s dedication was apparent in the volunteer&rsquo;s continued service year after year. The chief joked that because of the 17-year volunteer&rsquo;s frequent presence, they wonder if “he&rsquo;s going to out-live all of us.&rdquo;

“It speaks volumes of him,&rdquo; Dominguez said. “Sometimes he&rsquo;s here at 2, 3 in the morning already doing paperwork and so forth, and we&rsquo;re very proud to call him a member of our organization.&rdquo;