Valeria Gutierrez remembers surprising her daughter with her favorite meal-an order of three-piece Whatachick’n strips from Whataburger before going to work.

“[Versidy] opened the fridge and saw the meal and she’s like, ‘oh, you got me chicken strips?…Can I eat them?&rdquo; Gutierrez recalled. “And I was like, ‘yeah they’re yours’ and she responded with ‘OK’ and went to her room to watch her TV and listen to her music. So the last time I spoke to her was about eating her chicken strips.” 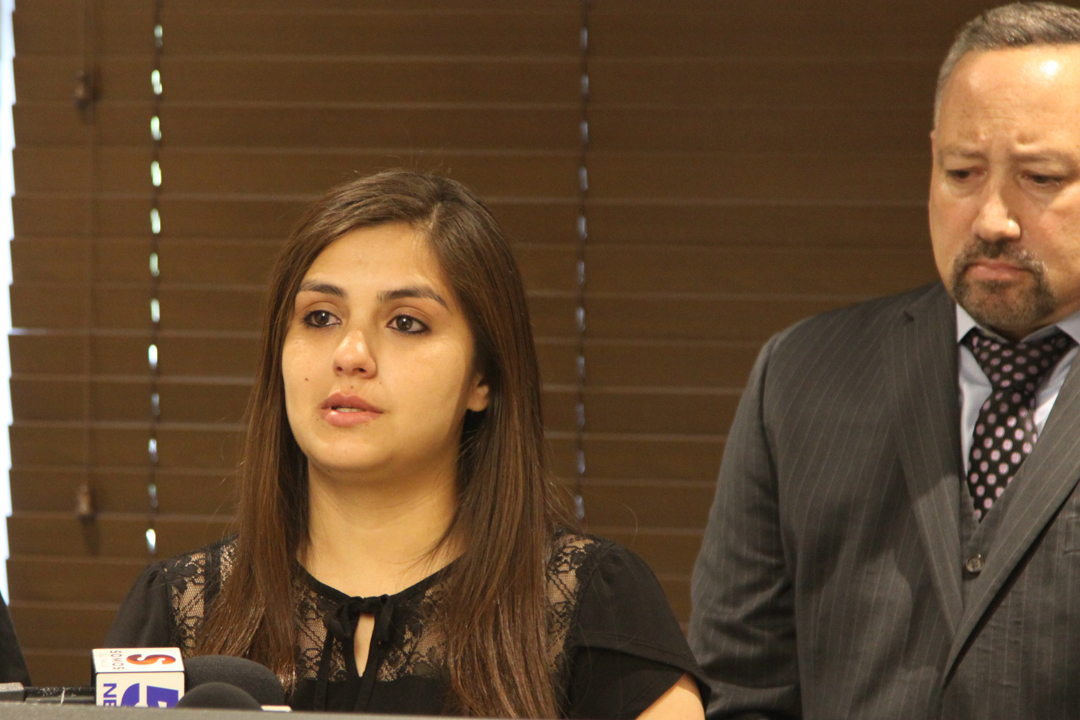 Shortly after being dropped off to work by her husband on Sunday, July 21, Gutierrez and her husband Ventura heard the devastating news that there was a fire at their home located in the 2900 block of Alejandra street near Palmview. Versidy, their oldest daughter, was inside the house.

By that evening, Versidy was pronounced dead at the scene.

The fire that took Versidy’s life gained local attention due to many social media criticisms on how the multiple fire departments that responded to the fire handled the case and the lack of fire hydrants in the neighborhood.

Versidy’s parents joined the chorus of critics Wednesday after announcing at a press conference they have retained the services of San Antonio Attorney Chris Mayo who has hired a team of investigators to investigate the fire-and the responding fire departments.

“What we want to do is get to the bottom of this and find out who was responsible for it,&rdquo; Mayo said. “Our initial thought is somebody is responsible for this tragedy and could it have been prevented? If that’s the case, then of course we’re going to look to the county, the various cities involved, who took the call who didn’t take the call, who had the opportunity to take and didn’t do anything about it.”

THE FIRE
As previously reported, the Alton Fire Department arrived at the scene of the fire at around 3:05 p.m.

When they got there, Emanuel Espinoza-the acting fire lieutenant on shift that day-said that the structure was “fully engulfed.&rdquo;

“Flames were already coming out of all the windows in the structure…,&rdquo; Espinoza said. “When we got a window open the flames inside the structure [started to] flashover, which meant the temperature inside was too hot. Unfortunately, I had to make a decision, which is a very hard decision to make, to pull back.”

Though the area is outside Alton city limits, the Alton Fire Department was the first to respond to the scene due to an agreement with Hidalgo County to handle fires and other emergencies in areas that aren’t incorporated to any cities.

The fire ultimately spread to two neighboring houses and a nearby shed and mobile home. Versidy was found dead in the master bedroom located at the northwest corner of the house.

The Alton Fire Department stayed on the scene through 3 a.m. the following morning. Multiple fire departments from across the Rio Grande Valley responded to the fire to provide aid.

VERSIDY
Wednesday’s press conference marked the first time the Gutierrez family has spoken publicly about the incident, and their daughter who was lost in the blaze.

“Words like sad, depressed, heartbroken, they don’t even describe what I feel. I don’t want other parents to go through this,” Gutierrez said.

She and her husband, dressed in black, held hands throughout the press conference where Gutierrez constantly fought back tears as she talked about her daughter.

She was a loveable individual, Gutierrez said. An AB honor roll student who participated in the spelling bee with an interest in science, computers and dancing. Her dream was to open a pastry shop and she was excited about joining the dance team when she started junior high school in a few years.

“Now that’s not going to happen and all her dreams are gone. She’s never gonna be able to have any more first days of school,&rdquo; Gutierrez said. “I will never get tired of saying she was so humble, so sweet, so funny and caring, She always put everybody, it didn’t matter who, in front of her. Her little sister has been asking about her and it&rsquo;s a difficult conversation. We tried to just tell her that she’s sleeping and we will see her again. We don’t know how we’re gonna do life without her.”

THE AFTERMATH
Questions about how the fire was handled-and accusations of mismanagement-quickly spread through social media following the blaze. The Alton Fire Department was accused of arriving to the scene as much as 50 minutes after the call was made and many posted about the department running out of water multiple times.

Days after the incident, the Alton Fire Department and the Hidalgo County Fire Marshall held a press conference to combat the rumors.

Alton arrived at the scene within five minutes of the call and had plenty of water, officials stressed at that press conference. They tried multiple times to save Versidy.

That press conference, Mayo said Wednesday, concerned him and his clients.

“When I heard about this situation, I had a lot of questions as well. One of which was why was the county and the city fire chiefs so quick to hold the press conference and to issue statements coming up with excuses or reasons why they acted the way they did. That concerned the family as well,&rdquo; Mayo said.

At the Wednesday press conference, Ventura disputed Espinoza’s claims about the scene and criticized the response time of the Alton Fire Department. He said he arrived at the scene before they did after dropping off his wife at her work-the Subway located near La Homa and FM 495.

“[Versidy] called me at 2:57 to tell me there was a fire in the house, I told her to go outside and just sped home, running every red light on the way” Ventura said. “I arrived by 3 p.m. and the fire department wasn’t there and there wasn’t a fire inside the house, just a lot of black smoke. I tried to get to her but was pulled back [when the fire department arrived.]”

THE INVESTIGATION
Investigators hired by Mayo found that the initial 911 calls concerning the fire were sent to the city of Palmview’s dispatch services, Mayo said. At the press conference, Mayo criticized the city for not letting their firefighters respond to the call.

“We know that the initial call that came in was the city that should have responded to the call-Palmview-and that Palmview passed on that call to the city of Alton,” Mayo said. “We want to find out why did they do that. We could speculate whether they thought they had an adequate team or whether or not they wanted to spend their resources for what they did because this was an unincorporated area in the county. Did that delay in response time become a contributing factor to her death?”

Mayo also criticized the lack of fire hydrants in the area. Hidalgo County Fire Marshall John Franz previously said that the lack of a fire hydrant in the area was due to a lack of enforcement in residential fire codes in the county due to not meeting a population requirement.

Because of the population count of around 775,000 in the county, neighborhoods are not required to have a fire hydrant.

“That’s a cop out,” Mayo said, adding that three public schools near the Gutierrez should’ve been enough to install a fire hydrant in the area.

PALMVIEW’S RESPONSE
The day after Mayo’s comments, officials with the city of Palmview and their fire department held a press conference in response to claims from Mayo, calling them misleading and inaccurate.

“The city of Palmview did not receive an emergency call in regard to the fire, and we certainly did not pass that call as Mr. Mayo falsely stated,” Palmview city Attorney Eric Flores said.

Flores also criticized Mayo and his team for the allegations made against the city fire department and for not reaching out to them during Mayo’s investigation.

The city received only a call from the Alton Fire Department to provide mutual aid, Flores said, adding that that fire became a priority and that Palmview fire Chief Jerry Alaniz dispatched three of their vehicles to the scene.

Boundaries for the fire district are south of the 3 Mile Line from Moorefield to Iowa Roads, Alaniz said. The fire was north of the boundary.

Mayo did not respond to a request for comment regarding the Thursday press conference.

At the Thursday press conference, Flores said that no legal action is planned to be taken against Mayo, echoing Mayo’s comments made the day earlier when asked if Versidy’s parents were planning to file a lawsuit.

“We want to make sure we do a careful investigation and make sure that these parties are actually getting engaged in improper conduct or negligence,&rdquo; Mayo said. “And if they did, we’ve got to do this to help prevent anything like this happening in the future, that is the family’s goal.”