U.S. Immigration and Customs Enforcement arrested Hernandez in August 2017 after he protected drug shipments during a sting operation. Hernandez took the case to trial in March, when a jury of Rio Grande Valley residents found him guilty. 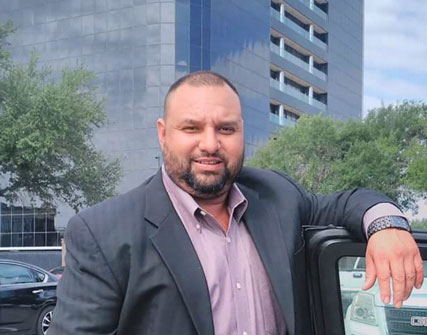 Hernandez, however, claims the federal government framed him for crimes he didn’t commit.

When federal agents caught him accepting cash to protect drug shipments, Hernandez had taken a low-paying job with the Progreso Police Department.

“They created their case on excerpts of audios. They created a story. And they just presented it. There’s missing tapes. There’s missing conversations,” said Hernandez, who referred to Saucedo-Rodriguez as CI, an acronym for confidential informant. “The CI manipulated audio recordings. It’s ridiculous. I don’t know how a district court can allow a case to proceed like that.”

In one instance, Saucedo-Rodriguez claimed he paid Hernandez for information.

“That day I told the agents I was going to meet Mr. Hernandez at the same movie theaters where I had met with him the first time,” Saucedo-Rodriguez said when he took the witness stand in March, speaking through a translator. “But I never saw him at the movie theater. I just kept the money that the agents had given me for him.”

The allegation that Hernandez accepted $2,000 during the meeting became part of the criminal complaint against him.

Saucedo-Rodriguez pleaded guilty to theft of government money and received a sentence of time served.

“The whole thing is a lie,” Hernandez said, adding that the informant would become an issue on appeal.

Federal agents frequently handle informants with criminal records and other credibility problems. Another witness against Hernandez had “CDG,” the acronym for Cartel Del Golfo, tattooed across the back of his neck.

Prosecutors bolstered witness testimony with audio recordings, which allowed the jury to hear Hernandez in his own words. Jurors took less than four hours to reach a verdict.

After the verdict, the U.S. Marshals Service sent Hernandez to the East Hidalgo Detention Center in La Villa.

“It’s kind of frustrating knowing that I’m here for something that I did not do,” Hernandez said, but he quickly adjusted to life behind bars.

Hernandez said he lost about 25 to 30 pounds because the jail serves meals in small portions. He also plays goalie on a soccer team.

“There’s a lot of different gang affiliations here, but I go out with everybody,” Hernandez said, adding: “A lot of people call me sheriff.”