Nearly 35 new migrants were dropped off at the Catholic Charities Humanitarian Respite Center in McAllen where they were greeted by sister Norma Pimental, who provided them with a tour of the facility and rules of the place.

“Remember, take what you need and only what you need,” Pimentel told the migrants before they were led to the center’s mess area. Shortly afterward, Pimentel greeted several members of congress, and House Speaker Nancy Pelosi, who arrived to honor her work. 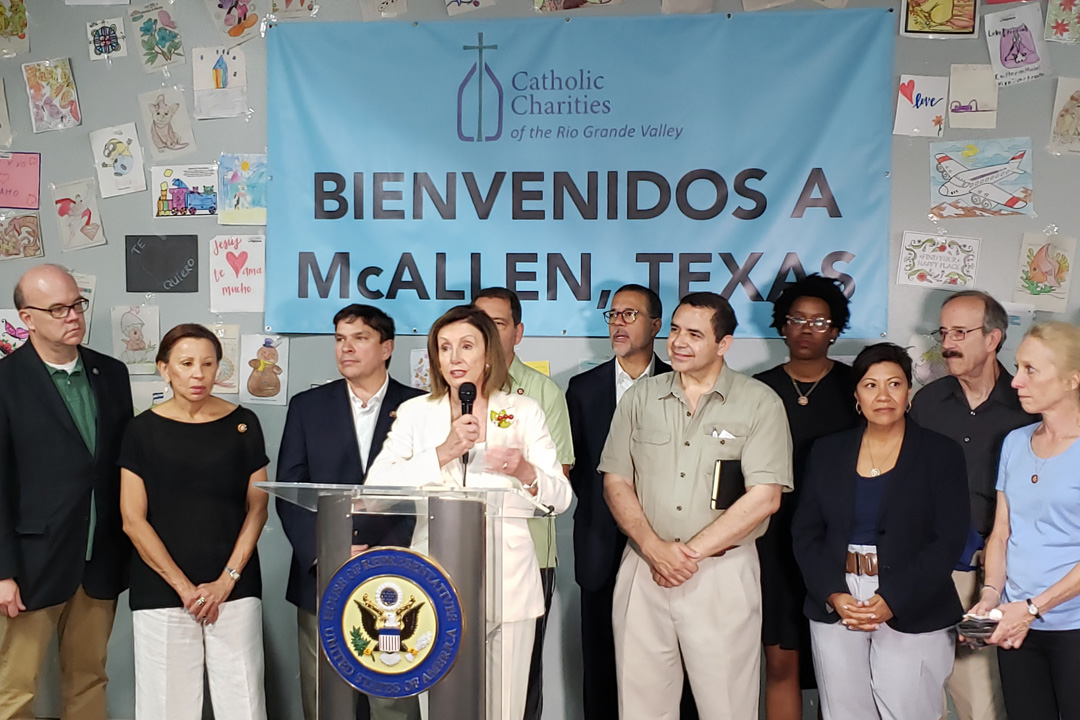 Pelosi was in town along with a delegation of dozens of Congress members following a trip to the Northern Triangle-the countries made up of Guatemala, El Salvador, and Honduras where most of the migrants coming to the United States come from.

“We want to get to the root of the issues causing migration and finding how we as Americans can help those countries improve conditions,” U.S. Rep. Vicente Gonzalez (D-McAllen 15) said.

The delegations visit to the Rio Grande Valley included a stop at Mission’s historical La Lomita Chapel for a private mass and a tour of the local immigrant detention centers. Though Pelosi didn’t mention the centers at a press conference at the respite center that concluded the tour, Pelosi stressed the importance of respecting the immigrants that come through the border.

“We didn’t go just to visit. We went to listen, learn and share our thoughts so we can have better public policy,” Pelosi said. “We’ve been here along the border so many different times…to make sure we are honoring the dignity of our migrants coming into our country. That the conditions they are being met with meet their needs and respect and honor them and the values of America. When we don’t respect the dignity of all of those migrants, we lessen ourselves.”

During a tour of the respite center, Pelosi met with several migrants and invited them to share with her their stories.

All the migrants from the northern triangle who spoke said they moved due to unsafe conditions back home, and expressed gratitude for being allowed to the country.

“These stories are the most persuasive method we have to change minds,” Pelosi said. “Those personal testimonies strike to the heart of the American people. Stories of families saying why they left, whether it was violence against themselves or their children, it tells a story that you can’t cut off the funds to central America if you want to change this flow.”

A major discussion point Sunday was funding being sent to these countries to help improve conditions there that are being cut off by the current administration.

“Bottom line is this: what happens in central America will have an impact here,” U.S. Rep Henry Cuellar (D-TX) said. “There are push and pull factors we have to look at. It didn’t matter if it was Guatemala, El Salvador or Honduras, all those areas we went in, the administration is cutting off funds. We disagree with the policy of the United States to cut off resources that help the children, indigenous people in the region and fight corruption. It’s key to making a difference.”

Pelosi stressed the importance of cooperation between the United States and the northern triangle to improve conditions in those areas.

“The problem we see is the governance problem not being able to conquer corruption that affects security and prosperity,” Pelosi said. “That’s what we saw. We have to work together in a cooperative way.”

Pelosi also praised and highlighted the country’s origins as a country made up of immigrants, arguing for better conditions for them.

“Everyone here comes with the hope, determination and optimism to make something of themselves. Those are American traits and these immigrants make America more American with their values,” Pelosi said. “We’re neighbors. We have to cooperate to build better situations so when we have temporary protective status as permanent for these migrants, then we will be able to tell them ‘stay if you wish. But when you go home, you will have a safe place to thrive in.’”