With one in 59 people living on the autism spectrum, law enforcement officials and first responders need to find ways to communicate with this growing population.

That’s according to Dennis Debbaudt, an investigator and autism advocate who last week led four trainings dedicated for autism risk and safety management at the Alton Regional Training Center. 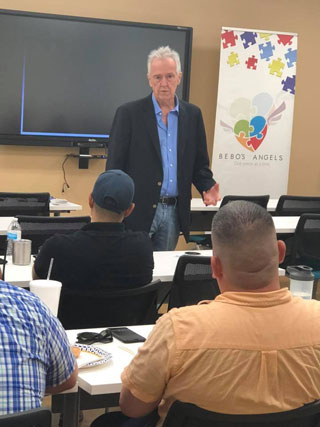 “My goal here is for the audience to get a sense of why they need to know this and apply this simple, basic knowledge they can use,” Debbaudt said. “We’re training them to have short duration contact with someone who has a high-risk behavior through no fault of their own.”

Autism is a developmental disorder that impairs the ability to communicate and interact with others according to the Pharr-based non-profit Bebo’s Angels, which hosted these trainings last Thursday and Friday.

Bebo’s Angels has a working relationship with the Alton Police Department where they regularly host these trainings. Last February, they partnered up with Alton to distribute bumper stickers to help identify those with autism if they’re pulled over by Alton police.

According to Bebo’s Angels Director Daniel Gonzalez, Alton is one of the few cities across the Rio Grande Valley they are partnered up with for these trainings.

“We don’t want a misunderstanding with an individual who is autistic and may get mistaken with someone under the influence which happens a lot,” Jaramillo said. “We weren’t educated or provided with these trainings in the past. Now that they’re teaching us these identifiers, we approach the situation differently rather than a tactical aggression and we talk to them with patience.”

Misunderstandings between those on the autism spectrum and law enforcement officials have an unfortunate history, Debbaudt explained.

Over a decade ago, researcher Riaz Hassan released a widely used profile to identify suicide bombers which identified them as people appearing to talk to no one in particular, unusual body language, constantly pacing back and forth and displaying other forms of erratic behavior.

“These are part of the behavior of someone known to be a suicide bomber. That is also the profile of behaviors for autism,” Debbaudt said. “Some of their behaviors are mistaken for being threatening. It’s become a hot topic because of a population that a generation ago was not a cause for concern.”

During the 1970s, only one in 10,000 people were living with autism, Debbaudt said. He became an autism advocate after his son was diagnosed with autism and saw a lack of research concerning the disorder due to the low population at the time.

“People with autism are a wonderful group of people who are capable of so much more than being a high-risk contact with the police,” Debbaudt said. “The population itself has difficulty with the signals they send or how they communicate which cause these issues. They’re more like us than not.”