As the 2019 high school volleyball season moves into its third week it appears the Lady Patriots of Mission Veterans High School are finding their form. That could be bad news for their opponents.

The Lady Patriots have been one of the Valley’s top teams for several years and others hoping to unseat them have looked at this year as the time to do it. After all, several key players graduated from last year’s team. This season opened with a couple of losses. 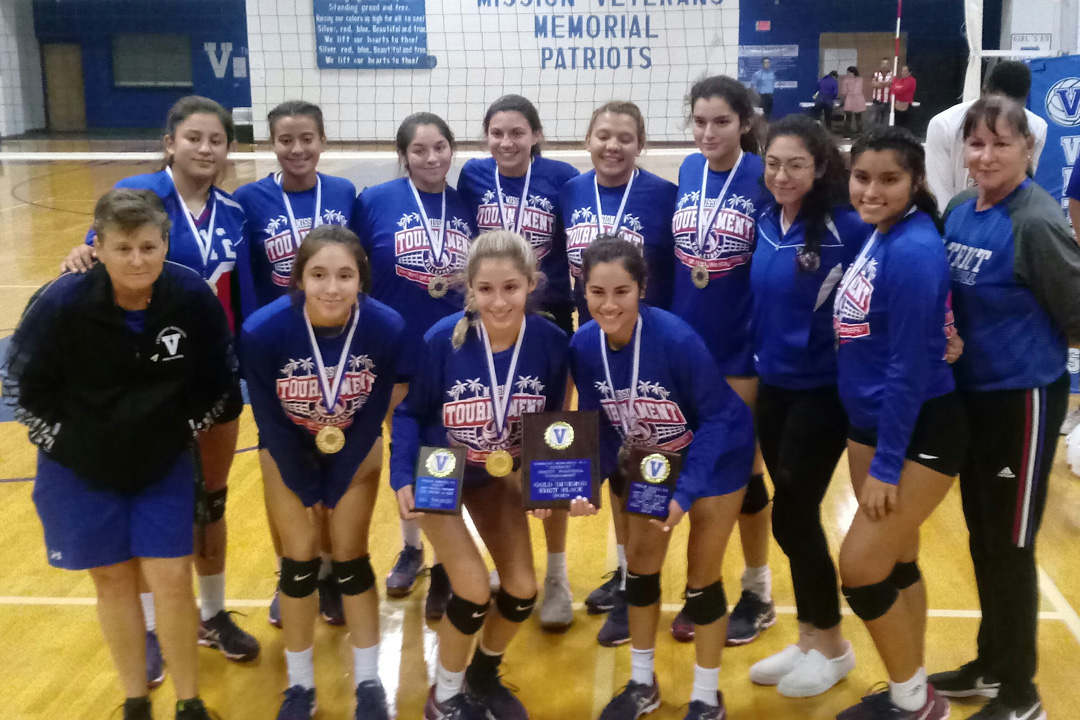 This past weekend’s Mission Volleyball Tournament also showed that others are perhaps closing the gap when it comes to bringing down the Lady Patriots. However, in the end the results were still the same as Mission Veterans won the tournament, compiling six wins against no losses over the two day competition.

It was perhaps the manner in which the Lady Patriots won their last two matches of the tournament that showed how knocking off Mission Veterans will be a challenge this year too.

Four Big 7 teams used perfect 3-0 records on Friday to win their respective pool and advance to the Saturday showdown along with teams from Brownsville and Laredo.
The day opened with the Lady Patriots defeating District 31-5A rival Sharyland High two games to none. The team’s two big hitters (senior Kassy Lerma, freshman Rylie Barnett) recorded kills to open the first set and each won several more points with booming hits through the Lady Rattlers defense in the 25-6 win.

Sharyland battled back in the second set behind the play of senior Tristen Maddox. The Lady Rattlers led 16-15 at one point before the Lady Patriots came away with a 25-19 win.

Two other Big 7 schools faced off in another quarterfinal game to determine who would be the next opponent for Mission Veterans.

The first set between Sharyland Pioneer and Mission High was a tight affair. It was 18-17 before the Lady Diamondbacks outscored the Lady Eagles 7-1 at the end to win 25-18. Pioneer finished off the sweep with a 25-4 win in the second set.

That set highlighted the role setter Natalie Reyes plays for the Lady Diamondbacks. From setting up her teammates with precision passing to thwarting her opponents with difficult serves the sophomore seemed to be everywhere on the court.

The Pioneer victory set up another all District 31-5A match –up in the tournament’s first semi-final as the Lady Diamondbacks met up with Veterans. The exciting, tension filled contest showed that the district race this year should be a good one and that the future meetings between the teams later this season could be well worth the price of admission.

Pioneer won the first set 26 – 24 scoring the last two points to break a 24 –all tie after the Lady Patriots had tied it with three straight points of their own. Junior Daisy Monie and sophomore Lorelai Hill provided most of the points for the Lady Diamondbacks.

Knowing that another loss would end their day Veterans responded, jumping out to leads of 7-1 and 15-4 in route to a 25 – 17 win in the second set. Lerma and Barnett were the top point scorers for the game.

The decisive third set highlighted the depth of the Lady Patriots. Senior Karina Salinas started the scoring with one kill and ended it with two more in the 25-18 victory that propelled Veterans to the title game.

In the gold bracket championship game against Laredo LBJ, the Lady Patriots were once again put to the test and once again they answered.

LBJ broke open a tight opening set with a six point run at the end to win 25-17, putting the Lady Patriots on the verge of elimination again. Veterans trailed 23-21 in the second set before winning it with four straight points at the end 25-23.

Four straight points by LBJ to open the third set the stage for another Veterans comeback. They trailed 20-19 before a three point run put them in the lead. Laredo answered with two straight points to tie it at 22-all.
Fueled at the end with kills from Barnett and an ace by senior Bella Dominguez the Lady Patriots managed to secure the match and the tournament championship with a 25-23 win

“They made me proud, being able to come back,” said Lerma. “It was nerve wracking all the way till the end but a win is a win and we’ll take it however it comes.”

Without her big game in the third set of the match with Pioneer the championship for Veterans may have never happened but Salinas downplayed her role.

“I saw my team fighting for me and so I felt that I needed to fight for them back and I did,” said Salinas. “We came through and we won. We did it”.

Barnett was a force throughout the two day tournament registering one powerful kill after another. The freshman talked about how she fits in on the senior heavy squad.

“It’s really nice knowing they have the trust in me to put it away on crucial points,” she said. “I’m thankful that I have a team that trusts me so I can do well for them.

Perhaps the unsung hero of the day was senior Ronnie Cantu. She has been a varsity setter since her freshman year and did a masterful job of not only delivering the ball to the numerous hitters the team has but sensing too, when to look elsewhere.

“There were times in the last set (against LBJ) that I set to the back row,” she said. “I felt that if the hitters were not putting it away in the front, so just to get the point and keep the game going. They are people that I can depend on as well; really everyone on the court.”

Senior Kassandra Lerma expressed the attitude the team has when faced with adverse situations like they encountered Saturday.

“We’re a fighting team,” she said. “Even when we lose we’re not going to give up. As you can see we fought till the very end. We just keep going and going and going because we want to win.”

Something for the rest of the Valley (and perhaps others) to consider as the weather cools down and the volleyball season heats up.