“As long as they keep winning championships, they have to be considered the top team in the district. They’re the team that people have to dethrone.”

Those words, spoken by Palmview Lobos’ head coach Margarito “Mage” Requenez, express how he, and most likely every other head coach in District 16-5A-1, feel about the 2019 Mission Veterans Patriots football team. 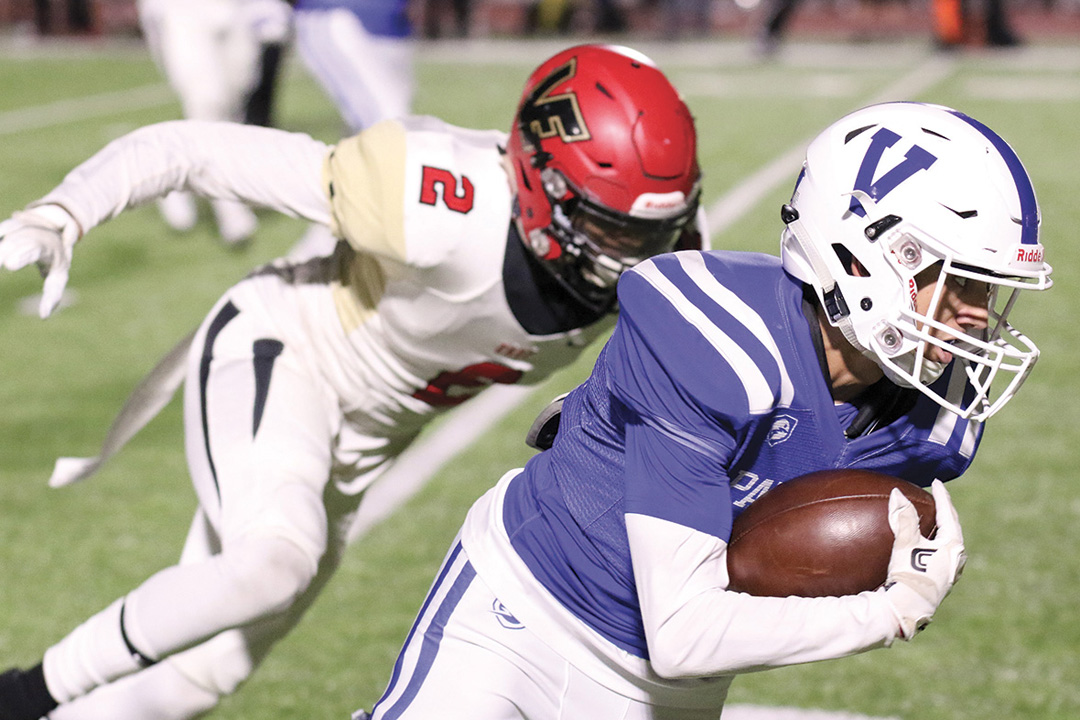 The Patriots, who not only claimed their first ever outright district championship last season, but went four rounds deep into the UIL state playoffs, left no doubt that they were the class of the district in 2018.

The fact that the Patriots went 9-0 in district play and the fact that they outscored their opponents by such large margins in the early going of their games, that head coach David Gilpin got into the habit of bringing in the reserves early in the second half, is a testament to how dominant the Patriots were in 2018.

Or as Gilpin himself put it, “In district play, for lack of a better term, we really weren’t tested. And I don’t use that term lightly. There were big games for us along the way and teams that played us tough along the way, but we had our back-ups in early in the fourth quarter of our games at least, if not in the third quarter of every district game. In nine district games, we were able to let our guys that don’t get as much playing time play basically the entire fourth quarter. And that was a great feeling.”

With the state’s top offensive player, who just happened to be Gilpin’s son, Landry Gilpin, at quarterback, it came as no surprise to anybody that the 2018 Patriots pulled off not only their best season ever, but one of the best seasons any Valley high school football team has ever had.

“Landry was named Mr. Texas Football, which is among every football player in the state; everyone” Gilpin said. “All positions, all size schools, everyone and he won that award. For class 5A he was the offensive player of the year in the AP poll and the Texas Sportswriters poll. He was first team All-State quarterback in both of those polls. He was All USA team second team quarterback in all classifications. Dave Campbell named him the 5A offensive player of the year for last year and that just came out this summer.”

Now that the younger Gilpin has moved on to play at Southwestern University, the question is who is going to run the Patriots’ high powered offense in 2019? The answer, which may come as a surprise to most Valley high school football fans, is a sophomore with zero varsity experience. And his name is Ricky Reyna.

“Ricky is a young kid, but he plays like a seasoned veteran,” Gilpin said. “He is calm, he is poised and he is everything that Landry was when it comes to character and commitment. He is a film study guy, he is a leader out there, he does everything right; just a terrific young man who does things correctly and that is what our quarterback has to do.”

“You can’t have any flaws as our quarterback,” added Gilpin. “You can’t have character issues. You can’t have commitment issues. Those are criteria which take priority over talent. So we could take a kid with less talent as long as he meets those other criteria, but Ricky meets them all and he is very, very talented. He is going to be a special one and we have him for the next three years.”

Gilpin went on to add that nothing is going to change in regards to his offensive game plan, which has been the same for the past 10 years, simply because he has an inexperienced sophomore at quarterback.

One thing that Reyna will have in his favor is sharing the offensive backfield with a talented and experienced running back.

“We’re going to pass the ball more than we run it and we’re not going to try to hide that fact, but having said that, we have a great running back in Danny Cantu,” Gilpin said. “Danny is poised for a GREAT year. He had a great summer, he had a great offseason, he’s had a great fall camp, he’s done everything right. So we’re going to give him the ball simply because he is one of our best players. We’d have to be dummies not to give somebody with his talent and skills, the ball.”

Unlike Reyna, Cantu has plenty of varsity experience. As a matter of fact, the 5-foot-10, 205 pound senior running back is entering his third season on the varsity squad. So how do he, and his teammates, feel about having Reyna take the reins of the Patriots’ pass-happy offense?

“The team’s confidence in him (Reyna) has grown over the summer.” Cantu said. “We saw him during spring ball when he had to get used to the faster pace of the game at the varsity level. We then went into 7-on-7 which gave him the opportunity to play in quite a few games to get his rhythm on. And then he came out for fall camp and he showed everybody that he’s ready to be there.”

When asked how he feels about the fact that every other team in the district is out to defeat the Patriots, Cantu said, “We know that after having a big season like we did last year, we’ve got a big target on our backs. But we have a chip on our shoulders and we’ve just got to take it one game at a time. At the same time though, we can’t take any team lightly.”

Another offensive weapon Reyna will be able to count on to take some of the pressure off is junior wide receiver A. J. Gonzaque. At 6-foot-1 and 195 pounds, Gonzaque will be a big target for Reyna as he runs his routes through the opponents’ defensive backfields. Like Cantu, Gonzaque doesn’t expect there to be much of a drop-off offensively simply because there is a new signal caller in the Patriots’ backfield.

“Losing a player like Landry, who was a great asset to the team, will of course hurt us, but we have a next-man-up attitude,” Gonzaque said. “And while Ricky may not have the running ability that Landry had, I believe he has a better arm. And that is why I am expecting nothing less from our offense this year.”

The Patriots will be kicking off their 2019 campaign against the Mission Eagles next Friday at 7:30 in the Battle of Conway. They will then be opening district play by hosting PSJA Memorial Friday, Sept. 6, at Tom Landry Stadium.