It is a streak that most football programs would love to have.

Eleven straight seasons of making the playoffs and opening round wins in nine of those seasons. 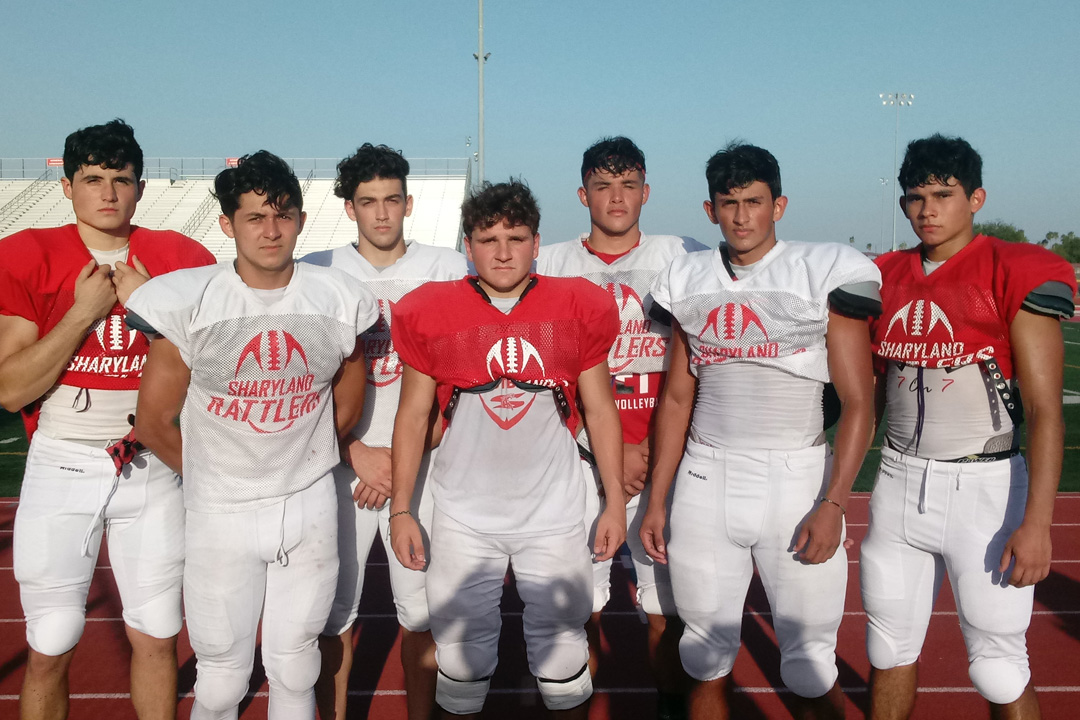 It is clear that the Sharyland Rattlers football team knows how to win.

It is also clear that the 2019 team will have many new faces on it. Sure there are 34 returning lettermen and the squad has 40 seniors. However, only two starters return from the offense and six on the defense from the 2018 group that won District 16-5A Div. II and battled into double overtime with Brenham before bowing out of the playoffs in the area round.

Fortunately for the Rattlers, eighth year coach Ron Adame has been here before. “Sometimes there is a big gap to fill and this is one of those years,” said Adame.

So how do you go about replacing a star-studded unit that included the overall district MVP, both the offensive and defensive district outstanding linemen, and six other first team selections? That process started last November following the loss to Brenham.

“As early as that bus ride back (from Corpus Christi) we started evaluating those kids coming back,” said Adame. “During the spring we evaluated what we had. We saw some defensive players that initially started as offensive players and gave them some offensive reps as crossover players and vice versa.”

This year Adame expects the team to be a combination of the seniors and returning lettermen along with some younger kids that may find themselves getting game reps.

“At the varsity level we are going to play the best eleven that we can on each side of the football, but they are going to have to grow up rather quick,” added Adame.

The team’s two returning offensive starters are part of the process too.

Senior center Roberto Farias was a first team all-district selection who spoke on his role as one of the few returning offensive players. “Just get everyone in sync and make everyone play together to have a successful season,” said Farias. “I’ve seen a big improvement in the first week of practice and the unity we are creating is amazing.”

The other returning offensive starter is senior running back Andres Bonilla. Like Farias, Bonilla too, sees himself as someone who can help lead the new guys.

“As a guy that has been there before and has been in those game situations, I can lead them knowing that if times get rough I’ll be there supporting them,” said Bonilla. “The key is to keep (them) moving forward, never backwards.”

The Rattlers return a bit more experience on the defensive side of the ball and senior linebacker Santino Pascual expects that to help the offense.

“I see it (the experience) as more of a confidence builder for the offense,” said Pascual. “They have something strong that they can trust. If they do make a mistake they have us.”

Both Pascual and senior defensive end Ethan Garza shared the same sentiments about the role of the defense as the year progresses.

“We expect a lot on defense,” said Garza. “Turnovers and three-and-outs.”

“Get the ball back to the offense. Have as many stops as possible,” added Pascual.

The Rattlers also return players from two sub-varsity teams coming off nine win seasons in 2018. Adame expects that to be a boost.

“That builds confidence,” said Adame. “The kids know how to win. The biggest difference is can they win on a Friday night level?”

That level is expected to be a high one this year. The Rattlers non-district games include three teams that made the playoffs last year (Brownsville Pace, McAllen Memorial, Brownsville Hanna) and one (La Joya) that was in contention until the last game of the season.

“We’ve got to learn to take it one week, one opponent at a time,” said Adame. “We look at it as an opportunity to bring out the best in our kids. We recognize that there may be some adversity at some point during that game and that’s how you find out the true character of a team, not by scheduling teams that might not bring out the best in you.”

Things won’t get easier when district play begins either. Besides the Rattlers themselves, Sharyland Pioneer, Valley View and Mercedes return as playoff teams from 2018. The district also includes long time Valley power Edcouch-Elsa along with Roma and Laredo Cigarroa.

So what should we expect from the Rattlers this year?

“Defending our district title, that’s going to be a challenge. Our boys are up to it; they recognize it and they’re up to it.”

The Rattlers open their season next Thursday, August 29 on the road against Brownsville Pace. The home opener is Friday, September 6 against McAllen Memorial. District play begins on Thursday, September 26 at Laredo Cigarroa.