Aiming to prepare 130 local students for a career in computer science, the Mission Economic Development Center marked the return of their “CyberMission” program last week.

The program is set to begin next month and will train 130 students through 11-week courses offered throughout the year. Upon successful completion of one of the CyberMission program courses, participants will have earned one of two pairs of industry-recognized certifications through CompTIA giving them the needed credentials preparing them for more than 32 job roles in the information technology field. 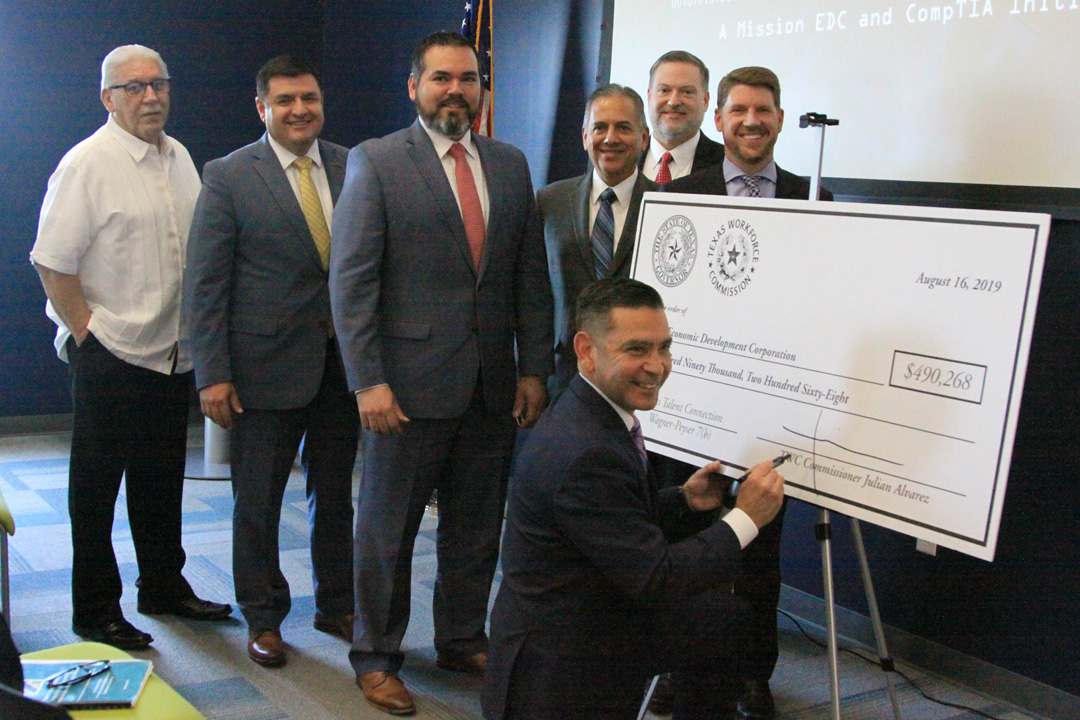 “We are continuing to build momentum on all the initiatives regarding technology and workforce development,” Cristina Garza, director of social impact said at a press conference.

The MEDC commemorated the start of the program with a press conference that occurred Friday, Aug. 16 at the CEED building where the classes will be held. The MEDC was on hand as Julian Alvarez III-commissioner of the Texas Workforce Commission presented the MEDC with a $490,268 check to fund the program.

“We’re preparing for the future not just for south Texas but the state,” Alvarez said. “What you’re doing here should be implemented all over the state. We are along the border. You would think something like this wouldn’t be possible but it is. When people start talking about where the best computer science technicians are being produced, we’re gonna be looking at Mission, Texas. We don’t prepare people for jobs. We’re preparing them with careers.”

For this cohort of students, the classes will be moving to a part-time model to give more students the opportunity to sign up and participate.

“The whole point of these programs is to get people into a much better, higher paying position and we understand not everyone has the privilege to drop whatever they’re doing and go into a full time program,” Garza said, adding that if chosen, tuition will be covered for students by the MEDC. “No matter what type of employment you have, there will be a time slot for you.”

“We help people foster that entrepreneurship mindset and the computer science realm not so they can become computer programmers, but so they can be exposed to an opportunity,” Silva said. “We are giving them a fundamental education and access to this soft skills training. We know there are a lot of individuals hungry for this. They’re trying to retool themselves and start a new career.”

To apply to the program, go to cybermissionedc.com. The deadline to apply is Thursday, Aug. 29.